Tennessee Sen. Marsha Blackburn calls on Biden to return to fracking and restart the Keystone XL Pipeline to combat the high cost of oil.

Sen. Marsha Blackburn, R-Tenn., criticized President Biden for being "unfriendly" to oil companies that are being prohibited from producing more oil due to the administration's policies. On "America Reports" Thursday, Blackburn called on Biden to return to natural gas and allow more permits for drilling.

SEN. MARSHA BLACKBURN: Whether it's a large oil company, independents or wildcatters, they will everyone tell you they have the ability to produce more. They have not been able to get drill permits for existing leases, and they want them. [Biden] needs to go back to fracking. He needs to allow more natural gas, the cleanest fuel, into the pipeline. What he needs to do is restart the Keystone, go back and drill in Alaska. Taking a million acres off-line in Alaska is wrong. Go back offshore, go down to Louisiana. Talk to some of those guys that are there in the Gulf. There are things he could do today. The oil industry and oil futures work off of certainty, and they are looking for that certainty. They're not getting it from this president. He has proven to be very unfriendly and very uncaring about what the American public is facing every time they go fill up the pump. 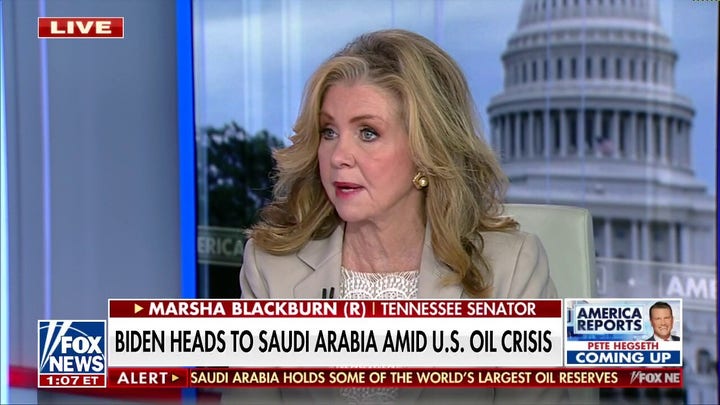