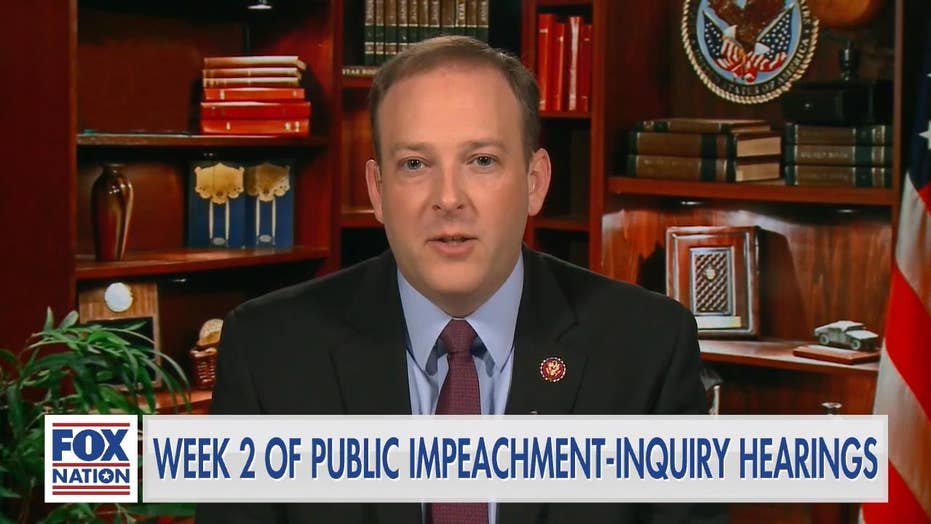 Rep. Lee Zeldin: Upcoming impeachment hearings should be postponed due to new development

New developments in the impeachment probe were revealed during two closed-door depositions that took place over the weekend, revealed Rep. Lee Zeldin, R-N.Y., who called for a delay in the upcoming impeachment hearings until those transcripts are publicly available.

"A lot of people didn't realize that once the cameras ended... on Friday, we then went back to this SCIF in the Capitol basement where there was a closed-door deposition," Zeldin said on Fox Nation's "Maria Bartiromo's Insiders."

According to Zeldin, Sandy "went right to the heart of why there was a hold on aid to Ukraine" during his Saturday deposition, and called for a release of the transcripts containing Sandy's statement in time for week two of public hearings.

"A great answer given, a very informative answer by Mark Sandy," Zeldin said, "and I think it would change some of the answers given by some of these other witnesses this week."

While many of the transcripts from last week's hearings, both public and private, remain unavailable at this time, much of Zeldin's questioning for the upcoming hearings revolves around the new information, and he explained that deposition rules prevent him from referencing the substance of those interviews in public until the transcripts are released.

"I believe that we should not go forward with the next open public hearing until the rest of these transcripts are out, because I have questions to ask of these witnesses...based off of what we heard."

"You still have those several transcripts, including both David Holmes and Mark Sandy, that haven't been released to the public. I believe that we should not go forward with the next open public hearing until the rest of these transcripts are out because I would have questions to ask of these witnesses come Tuesday morning based off of what we heard," Zeldin said.

Asked whether he found it likely the transcripts would be made public, Zeldin said it was up to House Intelligence Chairman Adam Schiff, D-Calif. to expedite the public release of the transcripts.

"I don't know if there's that same sense of urgency from Chairman Schiff and his team to get those transcripts done by Tuesday morning," Zeldin said.

"If they could get them released by Tuesday morning, that's fantastic. But, if they can't...then we'll move the open hearings back a day or two or three, because it's going to change some of the answers that some of these witnesses will be giving," he said.