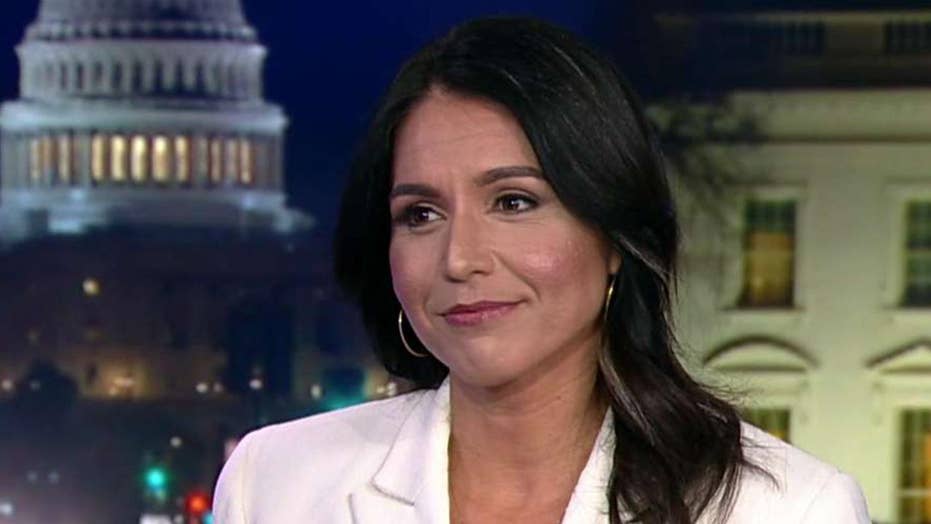 Rep. Tulsi Gabbard says Hillary Clinton is a warmonger, calls for US withdrawal from Iraq and Syria

"I think everybody knows and understands that she is a warmonger," Gabbard said on "Tucker Carlson Tonight." "And it is her record."

Gabbard was responding to the trending hashtag "#ivotedforHullaryClinton," which gained traction following Iran's ballistic missile attack on two Iraqi airbases housing American troops Tuesday night. Clinton herself was among those who tweeted the hashtag, which indicated a backlash against President Trump's decision to order an airstrike that killed Iranian general Qassem Soleimani last week.

The premise of the hashtag, according to Carlson, was that "President Hillary would not be starting a war with Iran." The host then asked, "Was that true?" before playing a clip of Clinton bragging about the death of Libyan dictator Muammar Qaddafi in 2011. That was followed by a video of then-presidential candidate Clinton warning that if Iran attacks Israel with nuclear weapons during her presidency, she would attack Iran.

"You look throughout, obviously, her support for the war in Iraq [in 2003], throughout her history. Her track record is well known," said Gabbard, who referred to Clinton as "the queen of warmongers" back in October. "And I think this is why a lot of people back in 2016 and the general election decided that they would vote for Trump, because of what he was saying on the campaign trail about ending stupid wars and bringing our troops home."

Gabbard criticized Trump for the current conflict with Iran and sending more troops to the Middle East, saying her supporters believe she can keep her promise to get America out of what she calls unwinnable wars.

"Getting out, getting our troops out of Iraq and Syria is essential," Gabbard said, "because the longer that they are there, the more likely it is that they are at risk and that we will end up in this endless tit-for-tat, back-and-forth quagmire of a war with people wondering, what is it all for?"