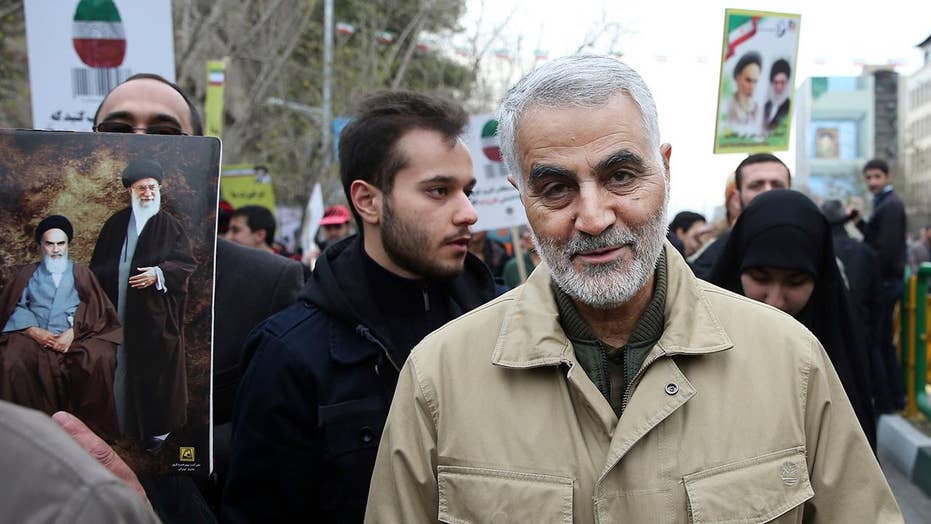 "You can't do anything," Khamenei boldly declared.

Less than 48 hours later, Gen. Qassem Soleimani, the head of the Islamic Revolutionary Guard Corps' elite Quds Force, was killed in an airstrike in Iraq ordered by "that guy" President Trump, with the ayatollah now claiming "harsh retaliation is waiting for the criminals whose filthy hands spilled his blood."

His words were echoed by Iran's president Hassan Rouhani, who promised to "take revenge for this heinous crime."

Rouhani also said Iran would "raise the flag" of Soleimani, the head of the Islamic Revolutionary Guard Corps' elite Quds Force, "in defense of the country's territorial integrity and the fight against terrorism and extremism in the region."

The Pentagon confirmed Thursday evening that Trump had ordered the attack that killed Soleimani and other military officials at Baghdad International Airport. Iran’s top “shadow commander” was responsible for the deaths of hundreds of American and coalition service members and the wounding of thousands more, the State Department said.

The U.S. State Department issued a security alert Friday morning urging all U.S. citizens to “depart Iraq immediately” due to heightened tensions in the region.

“Due to Iranian-backed militia attacks at the U.S. Embassy compound, all consular operations are suspended. U.S. citizens should not approach the Embassy,” the alert said. The agency also shared phone numbers people concerned about U.S. citizens and other loved ones in Iraq could call toll free for information.

Protesters demonstrate over the U.S. airstrike in Iraq that killed Iranian Revolutionary Guard Gen. Qassem Soleimani in Tehran, Iran, Friday Jan. 3, 2020. Iran has vowed "harsh retaliation" for the U.S. airstrike near Baghdad's airport that killed Tehran's top general and the architect of its interventions across the Middle East, as tensions soared in the wake of the targeted killing. (AP)

“General Soleimani was actively developing plans to attack American diplomats and service members in Iraq and throughout the region… The United States will continue to take all necessary action to protect our people and our interests wherever they are around the world.”

Brigadier General Esmail Qaani, who served as Soleimani’s deputy commander since 1997, will now take over the helm as head of the Quds Force, a move confirmed by Khamenei on Twitter later Friday.

Officials in New York City and Los Angeles have announced they’re taking precautionary measures in anticipation of a possible retaliatory attack. New York City Mayor Bill de Blasio said Thursday he’d spoken with top NYPD officials about immediate steps the department could take “to be vigilant against this threat for a long time to come.” LAPD said it was monitoring the situation in Iran but affirmed there has been no credible threat to the city.

Tens of thousands of people have taken to the streets of Tehran Friday to protest Soleimani's killing, chanting "Death to America" and holding up posters bearing his image, AFP reported. Similar demonstrations were held in a number of other Iranian cities, it added, citing state media.

U.S. Secretary of State Mike Pompeo also tweeted a video that he claimed showed Iraqis taking to the streets to celebrate the death of Soleimani. It was not immediately clear where or when the footage in the tweet was recorded.

The Iranian foreign minister warned that the U.S. would bear all the consequences of the “foolish” military attack, claiming Soleimani's assassination would only escalate tensions in the region given that he was “THE most effective force” fighting terrorism carried out by the Islamic State.

Many Democrats admitted that no Americans would mourn Soleimani's death but also raised concern that the escalation will put the U.S. on a crash course for a new conflict in the Mideast. House Speaker Nancy Pelosi released a statement saying that Trump ordered the airstrike “without the consultation of Congress.”

“American leaders’ highest priority is to protect American lives and interests,” her statement said. “But we cannot put the lives of American service members, diplomats and others further at risk by engaging in provocative and disproportionate actions. Tonight’s airstrike risks provoking further dangerous escalation of violence.”

Protesters burn a U.S. flag during a demonstration over the U.S. airstrike in Iraq that killed Iranian Revolutionary Guard Gen. Qassem Soleimani, in Tehran, Iran, Jan. 3, 2020. Iran has vowed "harsh retaliation" for the U.S. airstrike near Baghdad's airport that killed Tehran's top general and the architect of its interventions across the Middle East, as tensions soared in the wake of the targeted killing. (AP)

An adviser to Rouhani also quickly warned Trump of retaliation from Tehran.

"Trump through his gamble has dragged the U.S. into the most dangerous situation in the region," Hessameddin Ashena wrote on the social media app Telegram. "Whoever put his foot beyond the red line should be ready to face its consequences." 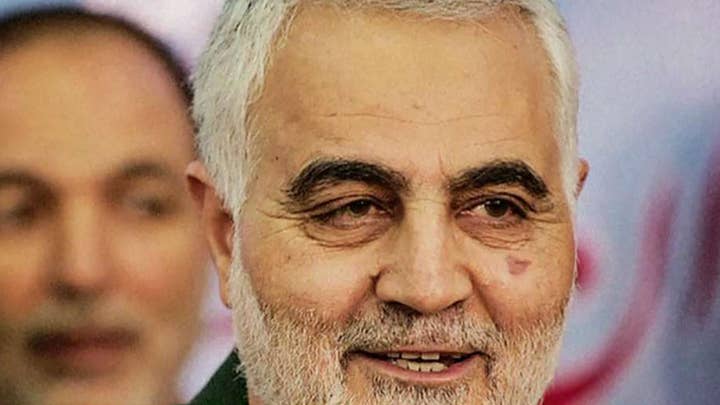 Soleimani is the military mastermind whom Pompeo had deemed equally as dangerous as Islamic State leader Abu Bakr al-Baghdadi. In October, Baghdadi killed himself during a U.S. raid on a compound in northwest Syria, seven months after the so-called ISIS "caliphate" crumbled as the terrorist group lost its final swath of Syrian territory in March.

The overnight attack occurred amid tensions with the U.S. after an Iran-backed militia attacked the U.S. Embassy in Baghdad, which was targeted Tuesday by angry mobs who were protesting recent U.S. airstrikes. The two-day siege outside of the U.S. Embassy in Baghdad came to an end Wednesday afternoon after dozens of pro-Iran militiamen and their supporters withdrew from the compound.

As recently as 2015, a travel ban and United Nations Security Council resolutions had barred Soleimani from leaving Iran.