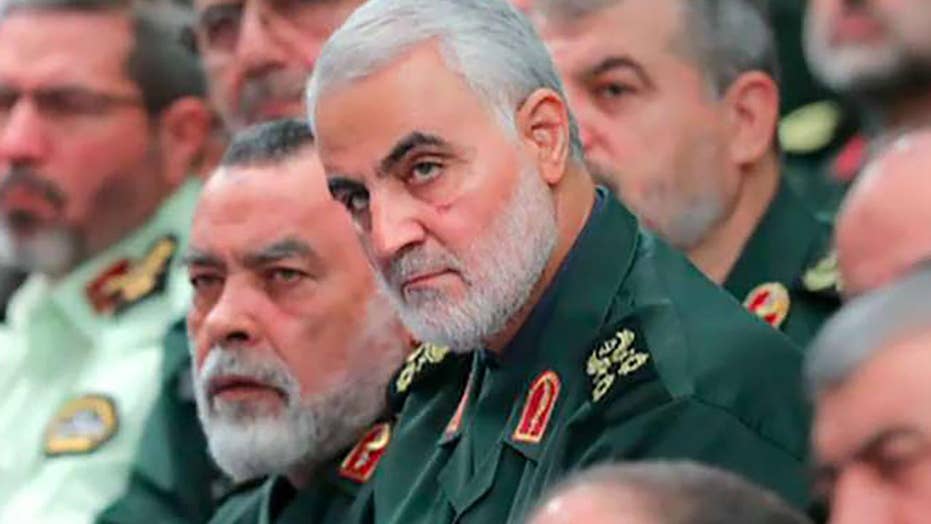 **This article was originally published in May 2019. Gen. Qassem Soleimani was killed in an airstrike in Iraq January 3, 2020 ordered by President Trump.**

As intelligence warnings about possible attacks orchestrated by Tehran on U.S. forces stationed in the Middle East reverberate through Washington – prompting the rare advance announcement that a U.S. warship is now being deployed to the region – many are bracing for further escalation.

The new Iranian threat comes just a few weeks after the Trump administration designated Iran’s official military, known as the Islamic Revolutionary Guard Corps (IRGC), a terrorist organization. Tehran retaliated by classifying all American troops in the region as terrorists.

Wedged deep within the IRGC is arguably its most potent branch – the elite intelligence wing called Quds Force – which itself has been a designated terror group since 2007 and is estimated to be 20,000 strong.

Its long-running leader, routinely referred to as the “shadow commander” or “spymaster,” is considered one of the most powerful persons in Iran. So who is 62-year-old Qassem Soleimani, the military mastermind whom Secretary of State Mike Pompeo deems equally as dangerous at ISIS leader Abu al-Baghdadi?

“He is the individual most responsible for the destabilization and inflammation of sectarian tensions that Iran has sown throughout the Middle East. Soleimani is begrudgingly considered by his adversaries to be a brilliant strategist due to his pioneering of Iran’s asymmetrical warfare doctrine,” said Jordan Steckler, a research analyst with opposition group United Against Nuclear Iran (UANI).

“Despite being outmanned, outgunned and outspent by its adversaries, Soleimani has employed tactics including terrorist attacks, covert operations and the outsourcing of fighting to foreign militias to undermine the sovereignty of neighboring states and expand Iran’s military and diplomatic influence.”

Born into an impoverished village in the southeastern province of Kerman, as one of six children, Soleimani is believed to have had only a high school education and survived on meager construction jobs in the city to make ends meet, at one point delving into fitness training and rising up the ranks in karate.

It wasn’t until the Syrian Civil War next door, with his staunch backing of the Shia-dominant Assad government, that ignited in 2013, that he suddenly came reluctantly to the limelight.

“Over the past two decades that he commanded the Quds Force, no photograph of his face was allowed in the Iranian media and much of Iranian society didn’t recognize his face,” said Roozbeh Mirebrahimi, an Iranian researcher and journalist now based in New York.

FILE - In this Friday, March 27, 2015 file photo released by the official website of the office of the Iranian supreme leader, commander of Iran's Quds Force, Qassem Soleimani, right, greets Supreme Leader Ayatollah Ali Khamenei while attending a religious ceremony in a mosque at his residence in Tehran, Iran. (Office of the Iranian Supreme Leader via AP, File) (The Associated Press)

But his influence with the religious leadership was cemented during the Iran-Iraq war between 1980 and 1988 that he muscled his way into by being a standout commander.

“It was the first few years of the revolution that he became acquainted with Ayatollah Khamenei, then Deputy Minister of Defense,” Mirebrahimi explained. “And they found a close friendship. When the war began, he gained the trust of the senior Corps commanders. By the end, he remained at the key positions.”

In 1998, he was appointed to the most sensitive and esteemed position as the Major-General of the Quds Force.

In 2017, the United States sanctioned one of his brothers, Sohrab Soleimani, for his apparent role in Iranian prison abuses. Qassem himself was first sanctioned by the U.N. Security Council in 2007, and was again slapped by the U.S. in 2011 for “providing material support” to the Assad-led regime in Syria.

Little is known about Soleimani’s personal life, other than he is reported to have three sons and two daughters. According to a 2014 Weekly Standard report, one of his daughters is married to the son of former Tehran mayor Mohammad Baquer-Qalibaf.

Names of his family are not disclosed, but Iranian sources told Fox News that his daughters' names are Zeinab and Leila. His mother-in-law's name is Zahra Agha-Ali, and his wife goes by Faati – short for Fatimah, all of whom lead very quiet lives.

According to Steckler, he is the man who has long been responsible for “recruiting Shia Iraqis into militias, training them in Iran and returning them to Iraq equipped with increasingly sophisticated weaponry.” Much of that weaponry, the Pentagon has underscored, was used to kill more than 600 U.S. service members between 2003-2004 in the Iraq war.

And now, those militias remain an official Baghdad staple and are much lauded. Across Iraq, much of that same sentiment rings true. In Baghdad, many view Soleimani and his Iranian-backed militias, called the Popular Mobilization Forces (PMF), as pivotal, hardened “street fighters” who were able to take matters into their own hands and defeat ISIS without the constraints put on the U.S-backed Iraqi Army.

“The cities liberated by the militias didn’t have all the destruction that the cities relying on coalition airstrikes had,” one Iraqi politician explained.

Under Soleimani’s vision and leadership, analysts say, he has carefully purported to carve out a “Shi’a Crescent” in long-held Sunni territory throughout the ISIS battle. The crescent is essentially a land path that runs from Tehran through Baghdad to Damascus and then to Beirut – where it is considered to be a direct threat on Israel’s doorstep.

Beyond militias in Iraq and the pariah government of Syria, Soleimani is considered to be the chief one responsible for propping up proxies ranging from Hezbollah in Lebanon to the Houthis in Yemen and even has a foothold with elements of the Maduro regime in Venezuela.

In an array of interviews with Fox News, several leaders lamented that in the immediate aftermath of the ISIS incursion to take over the country’s second-largest city of Mosul in June 2014 – when they were panicked and begging for help – neighboring Iran was there with reinforcements within a matter of hours. The United States, however, having pulled all troops out of the country at the end of 2011, was initially reluctant to get involved and even then took weeks to mobilize its backing.

The entrance to the once-embattled Iraqi city of Tel Afar, long occupied by ISIS, even adorned pictures of Soleimani as a seasoned leader at its entrance in the weeks after liberation.

A poster of Qassem Soleimani adorns the entrance of the Iraqi city of Tel Afar in the months after it was liberated from ISIS.

Another Iraqi Christian military and parliamentary leader – who showed off battlefield selfies with the notorious Soleimani – said that the Iranian top brass had taken it upon himself and went boots on the ground to clear Christian areas from ISIS in neighboring Syria. While that may be perceived by some as heroic, others see it as a long-term, scheming endeavor to shore up minority support wherever possible.

And while a leaked photograph of Soleimani’s visit to the Kurdistan Regional Government (KRG) territory in the north of the country in October 2016 prompted tongues in the Western media to wag with horror, for leaders on the ground it was merely “business as usual” given that the two countries share a long border and have a cauldron of diplomatic issues to discuss.

“Qassem is little known in the West because he cares nothing for fame or publicity, but everything about power and ideology,” noted Steve Bucci, a visiting fellow at The Heritage Foundation who served for three decades as an Army Special Forces officer and senior Pentagon official. “The Regime loves him; the Iranian people fear him.”

Inside Iran, his name generates something of a split view. In March this year, Iran’s Supreme Leader awarded him the highest military order – the Order of Zulfaqar – making him the very first Iranian official to be endowed with the commendation since the 1979 founding of the Islamic Republic.

He was even immortalized in a 2017 epic animated film entitled “Battle for the Persian Gulf,” in which he takes center stage vanquishing the Americans in the imaginary conflict.

Yet one young Iranian dissident in the country told Fox News that, at least quietly, he is characterized as “a criminal,” but most are afraid to protest in the face of being arrested, maimed or killed.

On the flip side, rumors have long circulated about assassination attempts or at least green lights from opposing countries, including Israel and Saudi Arabia – yet his presence continues to loom large, seemingly unfazed. Gen. Stanley McChrystal also recently revealed in Foreign Policy that as head of the U.S. military’s Joint Special Operations Command (JSOC) in 2007, he was tasked with the “tricky” choice of whether or not to eliminate Soleimani as the convoy rattled close by. But ultimately, he chose not to give the order to “avoid a firefight and the contentious politics that would follow.”

Even though the major general gives very few interviews, last year he used the state-run Tasmin news agency to issue an explicit warning to the Trump team.

“If you begin the war,” he cautioned. “We will determine its end.”