Parler CEO: People should be free to express themselves without fear or retaliation

Parler CEO John Matze told Tucker Carlson on Tuesday that the social media app has seen a "massive explosion in growth" this year as more people reject prominent Silicon Valley rivals "where moderation seems to be the norm."

"We are seeing a massive explosion in growth because people trust that Parler is going to do the right thing," Matze told "Tucker Carlson Tonight."

TWITTER RIVAL PARLER IS IN THE POST-ELECTION SPOTLIGHT. HERE'S WHY

"So, as opposed to these other companies where moderation seems to be the norm, on Parler we have a community jury," he explained. "This is where the people decide what is allowed and what's not allowed."

The community jury is what makes Parler different.

"You are judged by your peers just like our government allows for people," the CEO said. "You are innocent before proven guilty, unlike these other platforms that are colluding to, I guess, find things to find you guilty for."

Parler takes a far more laissez-faire approach, offering a platform where users, "liberated from restrictions," can publically express their ideas. 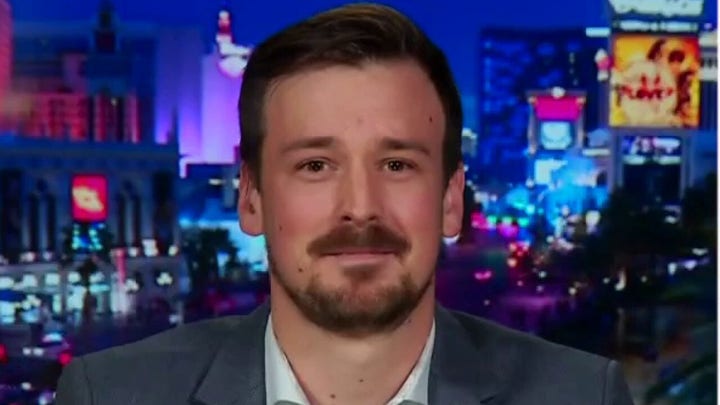 Parler became the No. 1 most-downloaded app on Apple's App Store during the week of Election Day and No. 2 on Google Play, as Republican frustration with dominant social media platforms continues to escalate. Parler's membership, while significantly smaller than Twitter's, is expanding at a swift pace as prominent Republican users join the platform.

"You mention that Parler was a little bit smaller than Twitter but you know we do have people that have comparable if not larger followings on Parler than they do on Twitter and they are seeing far more engagement," Matze said.

This illustration picture shows social media application logo from Parler displayed on a smartphone with its website in the background in Arlington, Virginia on July 2, 2020.

"There’s a mutual algorithm here you get what you sign up for. That's it. You get what you expect. That's why we are seeing such great engagement because it's not being curated like publishers would do is unlike they are on these other platforms."

Carlson asked Mazte how he plans to maintain his "posture" and avoid caving to Big Tech standards as the company grows.

"Well, when you go out in public people say crazy things all the time," Matze responded. "Everybody has opinions and some of them might not be the norm, right? It's not against the law to have those opinions. It's not against the law to express yourself, you know. And if you like one political candidate or another or you believe or don't believe in climate change or whatever it might be, you know, you shouldn't be taken offline because of it."

Addressing his critics, Mazte asked, "Do you believe that we should have somebody in, you know, New York, let's say in the middle of Times Square telling you what you can and cannot say? Because that's what these companies are doing."

With 88.9 million followers, Trump is among Twitter's most widely tracked users as well as a prolific poster. Matze told Fox News last week that he is "not sure" if Trump will join Parler but that he would "love to have him."

On Tuesday, the president's daughter and senior adviser Ivanka Trump announced that she had joined the platform and encouraged her 10.1 million followers to follow suit.