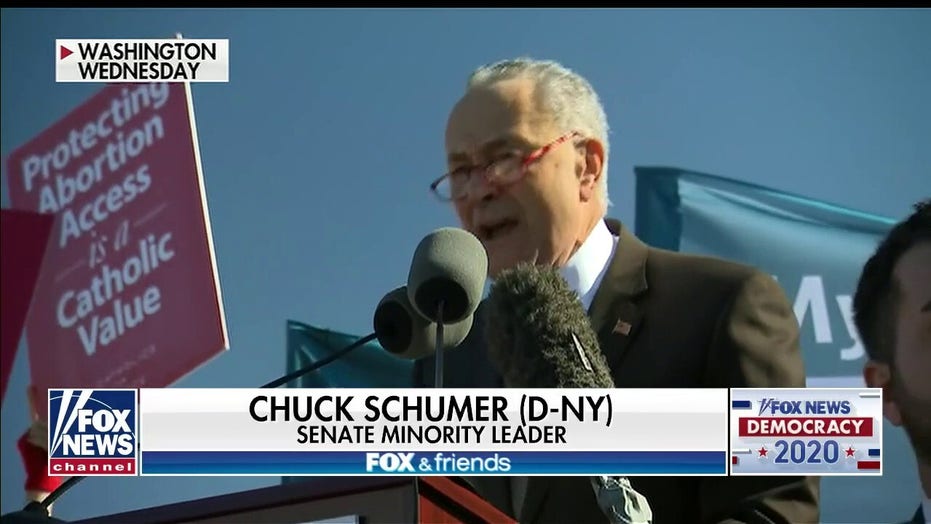 In an interview on "Fox & Friends" with hosts Brian Kilmeade, Ainsley Earhardt, and Steve Doocy, the Fox News contributor said Schumer's comments on a high profile Louisiana abortion decision were more than "over the line."

At the rally hosted by the Center for Reproductive Rights, Schumer noted that the case, June Medical Services LLC v. Russo, is the first "major" abortion case since President Trump's court picks have been on the bench. The dispute, dealing with restrictions over who can perform abortions, involves a Louisiana law similar to one in Texas that the court ruled unconstitutional in 2016, before Trump's appointed justices were on the Supreme Court and before conservatives held a 5-4 majority.

Although Schumer did not explain what the "price" would be as far as the justices are concerned, spokesman Justin Goodman said Wednesday that he was referring to "the political price Senate Republicans will pay for putting these justices on the court."

"Look, he was in front of a crowd. They were fanatically committed to the maximum opportunity to kill children, and they were all revved up, he was revved up, and they got carried away," Gingrich remarked.

Those allowances noted, Gingrich added that he believed what Schumer said was "pure demagoguery" and that "it was totally irresponsible and dangerous" in a country where attacking justices by name actually poses a real danger to them.

"Which is why Chief Justice [John] Roberts spoke out so strongly," he explained.

In a rare rebuke, Justice Roberts responded to Schumer calling his rhetoric "irresponsible" and "dangerous" -- prompting Schumer's office to slam Roberts and accuse him of bias.

"Justices know that criticism comes with the territory, but threatening statements of this sort from the highest levels of government are not only inappropriate, they are dangerous. All Members of the Court will continue to do their job, without fear or favor, from whatever quarter," wrote Roberts.

President Trump later Wednesday claimed the Schumer was not protected by congressional "immunity," suggesting that Schumer was in line for some kind of punishment.

"As far as Schumer is concerned, it was a terrible thing he said. I was amazed by it and if that were a Republican you would see really bad things happening," he said during a phone interview on "Hannity" with host Sean Hannity. "It is very unequal justice, and it is a disgrace that he was able to say something like that."

"I think it tells you the level of passion that you have on the left about a whole range of issues," Gingrich theorized, "because they see their world starting to collapse and they're beginning to get more and more desperate and Schumer yesterday was just an illustration of that." 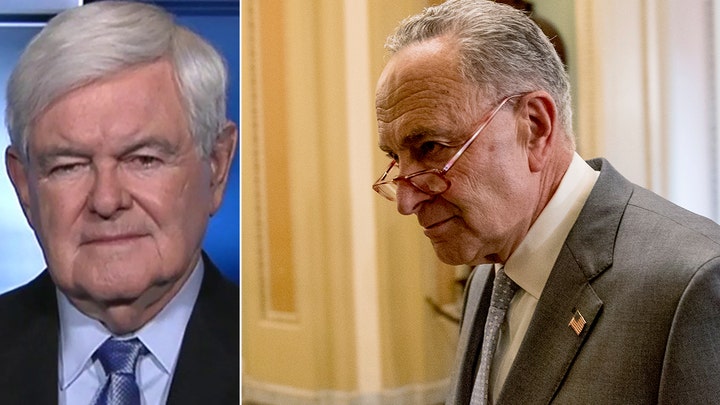 "Schumer made a mistake," he told the "Friends" hosts. "He ought to apologize for it. He ought to admit that it's totally out of bounds."

Speaking on the Senate floor later on Thursday morning, Schumer insisted he in no way meant to threaten Gorsuch or Kavanaugh, and that McConnell knows this. He claimed he was referring to the political consequences the case could have.