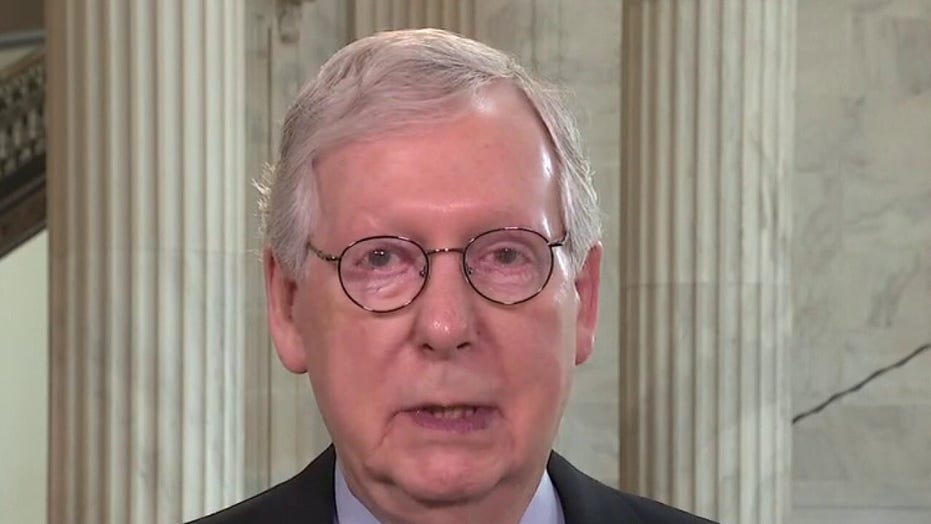 McConnell slams AOC: She can't even sell her far-left agenda to her own party

Senate Minority Leader Mitch McConnell, R-Ky., argued NY Democrat Rep. Alexandria Ocasio-Cortez's agenda 'is not in the middle,' adding that he doesn't believe she can 'sell her agenda' to the Democrat party, nor find any appeal from Republicans.

McConnell told "America’s Newsroom" that Ocasio-Cortez's agenda "is not in the middle," adding that he doesn't believe she can "sell her agenda" to the Democrat party, nor find any appeal from Republicans.

McConnell made the comments reacting to a tweet where Ocasio-Cortez warned that time is precious, reminding fellow Democrats that the majorities they enjoy in the House and Senate might not last.

In a series of Twitter messages on Wednesday, the lawmaker from New York suggested that an untimely death among Democrats could cost the party its slim Senate advantage even sooner than the 2022 midterm elections.

"During the Obama admin," she wrote, "folks thought we’d have a 60 Dem majority for a while. It lasted 4 months."

The reference was to the death of U.S. Sen. Ted Kennedy, D-Mass., in August 2009, the Washington Examiner noted. The stalwart Democrat’s Senate seat was filled by another Democrat temporarily – but then Republican Scott Brown won a special election to complete Kennedy’s term.

Kennedy’s death and Brown’s win prematurely ended a filibuster-proof super-majority that Democrats had at the time because it dropped them to 59 seats instead of the needed 60, the Examiner noted.

Ocasio-Cortez also urged her fellow Democrats against trying to negotiate deals with Republicans, claiming the GOP probably isn’t going to agree to much anyway.

"Dems are burning precious time & impact negotiating w/GOP who won’t even vote for a Jan. 6 commission," she continued. "McConnell’s plan is to run out the clock.

"We had six major bills so far this year passed on a bipartisan basis where we worked together and we met in the middle," McConnell noted on Thursday, before noting that Ocasio-Cortez’s agenda "is not in the middle."

"I don't think she could sell her agenda to their own party, much less find it any kind of appeal for that on my side," he continued.

In another message, Ocasio-Cortez referred to Biden’s talks with Senate Republicans as "playing patty-cake."

"Pres. Biden & Senate Dems should take a step back and ask themselves if playing patty-cake w GOP Senators is really worth the dismantling of people’s voting rights, setting the planet on fire, allowing massive corporations and the wealthy to not pay their fair share of taxes, etc." she wrote.

"To satisfy that particular member of Congress, I think the Democrats would have to have 60 votes in the Senate and all of them would have to be as far left as she is," McConnell said, reacting to the tweet without naming Ocasio-Cortez. "I think her big complaint is with her own party."

Ocasio-Cortez also warned Senate Democrats against supporting an infrastructure bill that fails to include climate and clean energy provisions.

"Mitch McConnell and the Koch brothers are not worth setting the planet on fire for," she wrote. "I know some Dems may disagree with me, but that’s my unpopular opinion of the day."

On Thursday McConnell noted that the Senate is "trying to get an outcome on infrastructure," which he pointed out is "something that is popular on both sides of the aisle." 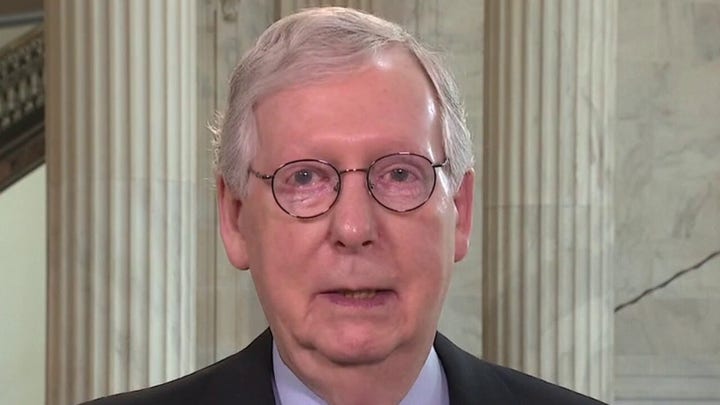 "All we're [Republicans are] insisting on is that the infrastructure bill be about infrastructure and not a whole lot of other things and that it be credibly paid for," he explained, before noting that Republicans are "continuing to engage in discussion" with other members of the party as well as Democrats and the Biden administration.

"We haven't given up hope that we'll be able to reach a deal on something really important for the country that we really need to accomplish and that is a major infrastructure bill," McConnell continued, stressing that "it will have to be done on a bipartisan basis."

McConnell then noted that Ocasio-Cortez "would like for it to be sort of a Green New Deal infrastructure package."

"I don't think that’s going to fly in the Senate," he continued.

McConnell made the comments one day after President Biden broke off negotiations with a group of GOP senators led by Sen. Shelley Capito on Tuesday amid disagreements regarding the structure and size of his proposed infrastructure spending plan.

With talks with Capito’s group effectively dead, Biden shifted his efforts toward negotiations with a bipartisan group of 20 senators. The president and top Cabinet members will continue discussions with the group on infrastructure during Biden’s upcoming trip to Europe.