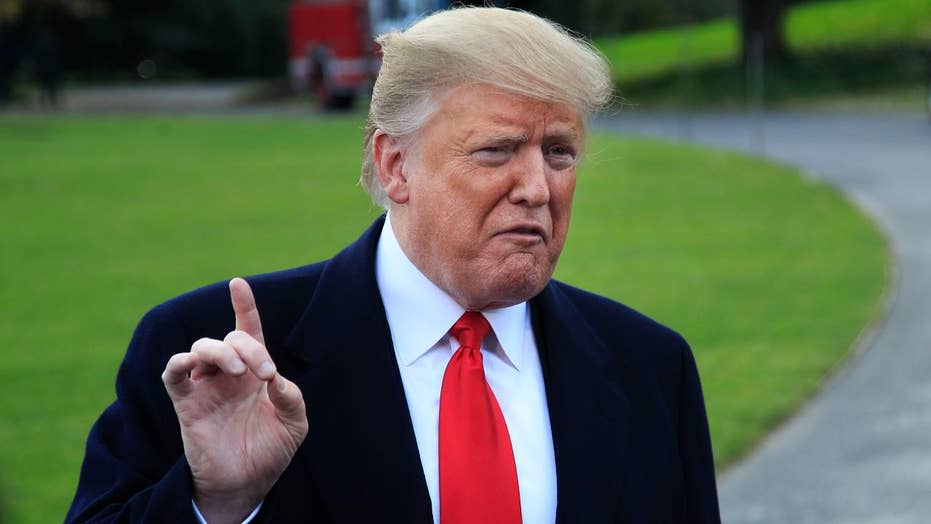 Trump insists he has authority to end birthright citizenship

Harvard law professor Laurence Tribe unleashed an unhinged attack on President Trump and his supporters Wednesday after the commander in chief said he was considering an executive action that would end the practice of "birthright citizenship."

"This fuxxxng racist wants to reverse the outcome of the Civil War," Tribe claimed. He was referring to the 14th Amendment, which is often cited by media figures as a Constitutional guarantee to citizenship for anyone – including children of illegal immigrants – born in the United States.

"Over half a million lives were lost in that sacred cause. If you agree we can’t let this lunatic get away with that, SAY SO!!! If you’re silent, you’re complicit," Tribe added in an apparent warning to Trump's supporters. Tribe has in the past caught attention for accusing Trump of "terrorism" and calling for his impeachment.

Although the 14th Amendment was originally passed as part of a Reconstruction-era effort to protect civil rights for African-Americans, it later became part of debates about immigration. The amendment reads: "All persons born or naturalized in the United States, and subject to the jurisdiction thereof, are citizens of the United States and of the State wherein they reside."

Tribe was one of many to criticize the president's would-be executive action. "This president should 'seriously' consider reading the Constitution," Sen. Kamala Harris, D-Calif., a leading 2020 Democratic presidential candidate, tweeted.

Trump, who indicated as a candidate that he would end the practice, said it was "ridiculous" to give illegal immigrants' children birthright citizenship.

"Birthright citizenship, where you have a baby on our land — you walk over the border, have a baby, congratulations, the baby's now a U.S. citizen. We're looking at it very, very seriously ...It’s, frankly, ridiculous," Trump said while appearing outside of the White House on Wednesday.

One of the practice's main opponents is conservative author Ann Coulter, who heavily influenced Trump's campaign and argued against the practice in a book that Trump personally requested a copy of before announcing his 2016 bid. Although Coulter has been critical of Trump's performance on immigration, she defended him on Wednesday.

"The inner circle of hell: Being condescended to by idiots," she tweeted, alongside a claim that Trump said he would try and change the Constitution. Pointing to Supreme Court precedent, Coulter, who formerly practiced constitutional law, has instead argued that the 14th Amendment protected African-Americans and children of legal immigrants.

In a column from 2015, Coulter defended Trump's initial criticism of the practice. She cited the Supreme Court decision in Elk v. Wilkins which involved a Native American who tried to claim citizenship after renouncing his tribal allegiance.

"The 'main object of the opening sentence of the Fourteenth Amendment,' the court explained — and not for the first or last time — 'was to settle the question, upon which there had been a difference of opinion throughout the country and in this court, as to the citizenship of free negroes and to put it beyond doubt that all persons, white or black … should be citizens of the United States and of the state in which they reside,'" Coulter wrote.

Coulter added that "the only reason the 14th Amendment doesn’t just come out and say 'black people' is that ... the Constitution never, ever mentions race." She also pointed out that Native Americans gained citizenship from a law passed in 1924 — well past the 14th Amendment's ratification in 1868.

Coulter doubted whether Trump would actually act on the issue, though, alluding to her previous complaints about inaction on the border wall.