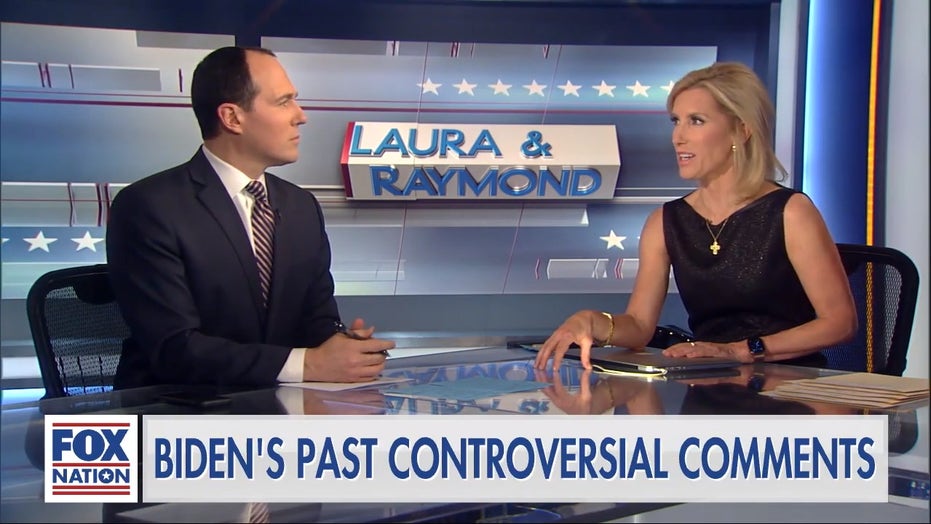 Biden ignores his own racially insensitive comments while

"I found this interesting," said Arroyo on Fox Nation's "Laura and Raymond" on Friday, "that [Biden] should be calling out someone for racism. ... He's probably forgotten that he's not exactly a model of racial sensitivity."

During a CNN town hall event on Wednesday, Biden reacted to President Donald Trump's decision to award Limbaugh the Presidental Medal of Freedom during the State of the Union address.

The president gave Limbaugh the prestigious honor after the longtime radio personality revealed that he had been diagnosed with "advanced lung cancer."

"Rush Limbaugh spent his entire time on the air dividing people, belittling people, talking about how, talking about blacks in ways, African Americans in ways that -- anyway" said Biden at the CNN event, without specifically citing any allegedly racist remarks.

"I don't think he understands the American code, decency and honor," charged Biden.

Some well-known incidents from Biden's past include his apparent joke to C-SPAN in 2006 that "You cannot go to a 7-Eleven or a Dunkin’ unless you have a slight Indian accent."  And in 2007, he called Barack Obama "the first mainstream African American [presidential candidate] who is articulate and bright and clean and a nice-looking guy."

"This is a disgusting, defaming of a man who's struggling," said Laura Ingraham of the attacks on Limbaugh. "A man who has done more to educate America about complicated issues in very difficult times than I think almost every law professor, every college professor in the country. Rush has taught more people about real history and real politics."

NBC News contributor and talk show host Hugh Hewitt called Biden's remarks, "slanderous," saying that "Rush Limbaugh has zero racism. And to attribute it to him is slander."

Arroyo observed that Limbaugh's longtime producer, who is an African-American man, has come to his defense.

"His 30-year producer, who is an African-American man, James Golden ... he has come out guns-a-blazing against this," said Arroyo. "He's like, 'How can you call this man a racist? I know this man. I work with him every day.'"

"If a man who made those racially insensitive comments that Joe Biden just did, if he can get the Medal of Freedom, which he did from Barack Obama. Anybody can get it," concluded Arroyo.

To see Ingraham's full remarks and more, join Fox Nation and watch the latest episode of "Laura and Raymond" today.