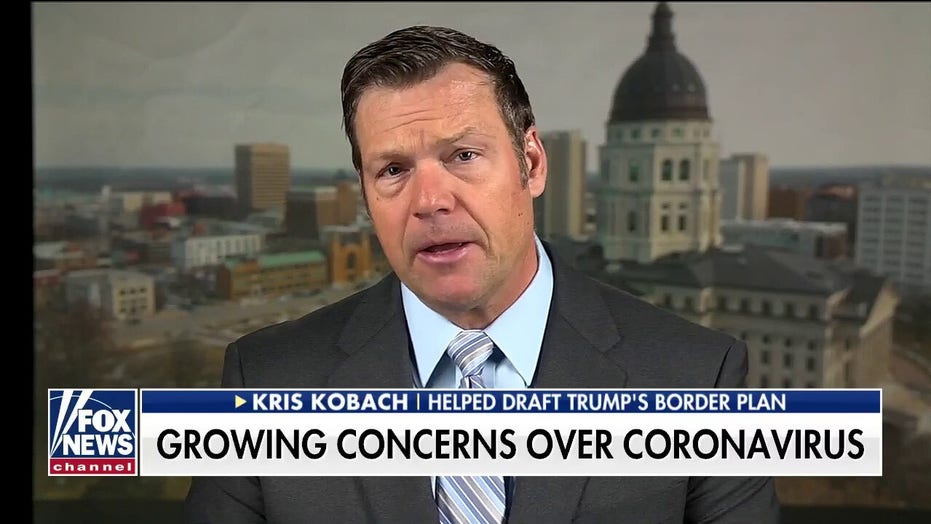 Kris Kobach on border security in times of pandemic

While President Trump "did the right thing" by shuttering ports of entry to people coming in from China in reaction to the coronavirus outbreak, the southern border is still not secured, leaving the United States exposed, former Kansas Secretary of State Kris Kobach said Saturday.

In an interview on "Fox & Friends Weekend" with hosts Dean Cain, Pete Hegseth, and Jedidiah Bila, Kobach said that the president and his administration made the "best move" they could have by limiting entry to the United States in reaction to the rapidly-spreading COVID-19 virus and that he was "glad he did it under criticism from the left."

"But, I will tell you this," said Kobach. "All of this talk about securing our borders does expose one problem that we still have."

"Because Congress failed to give President Trump the money early enough and in enough quantity, we still don't have adequate border wall built."

A worker wears a face mask to spray disinfectant as a precaution against the coronavirus at a shopping street in Seoul, South Korea, Thursday, Feb. 27, 2020. South Korea and China each reported hundreds more virus cases Thursday as the new illness persists in the worst-hit areas and spreads beyond borders.  (AP)

"And so, there is a wide-open door there," he warned. "And get this, Pete. Just last year there was an 85 percent increase -- an 85 percent jump -- in the number of Chinese nationals sneaking in the country illegally over the southern border. It's estimated upwards of 12,000 a year maybe coming in illegally."

There are more than 300 ports of entry at the southern border. The U.S. Customs and Border Protection reported over 800,000 total apprehensions in the 2019 fiscal year.

Additionally, U.S. Border Patrol also reported that their agents had apprehended 1,155 Chinese migrants this fiscal year after they had illegally entered from Mexico, Canada, or coastal boundaries. More than 95 percent reportedly entered the country over the southwestern border between October 1, 2019 and January 31, 2020. 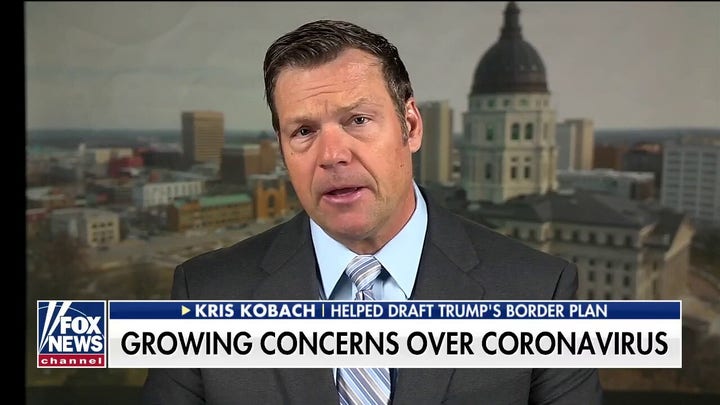 "During the peak of the humanitarian crisis, we were apprehending around three Chinese nationals per day. This year we are seeing approximately five per day," he told KGBT-TV, also promising that there are measures in place to identify individuals with signs of illness who may be potentially infected with a communicable disease."

There are zero cases of coronavirus in the Rio Grande Valley and Northern Mexico to date.

"So, while we have closed and controlled the doorways at our ports of entry, we have got this wide-open doorway on our southern border which leaves us exposed to pandemics like this," Kobach warned. "So, as someone who has been fighting for border control for a long time, I say: 'Hey, don't forget we still have that wide open back door."

Although the World Health Organization (WHO) has declared the outbreak a global health emergency, coronavirus has not yet been declared a pandemic.

More than 85,000 have fallen sick -- with most recorded cases in China -- but, thus far, there are only 62 confirmed cases in the United States.