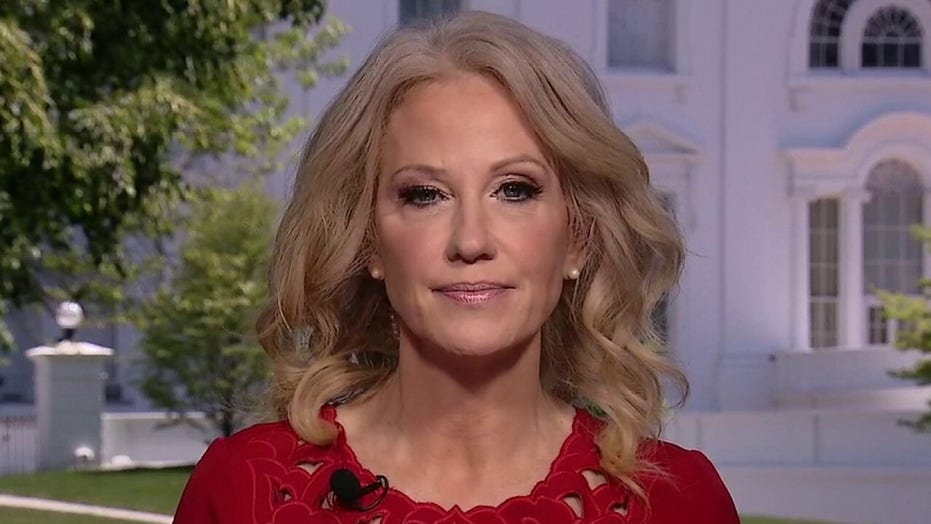 Counselor to the president Kellyanne Conway reacts on 'Outnumbered Overtime' to criticism of President Trump's use of the word 'warrior' and the latest on the state of the U.S. economy, 2020 election.

Counselor to the president Kellyanne Conway pushed back Thursday on Sen. Chuck Schumer, D-N.Y., for claiming the Trump administration had refused to address the coronavirus pandemic, calling it “more petty partisanship” at a time Americans should unify.

“The president has signed three consecutive [relief] packages into law the moment it has hit his desk," Conway told "Outnumbered Overtime." "The latest one has over $3 trillion in direct assistance through the Paycheck Protection Program that got a replenishment.

“For a family of four, you’re up to about $3,400," she said. "That’s not perfect and that’s not forever, but that is precisely why the president wants people to safely and gradually reopen up their economies.”

Conway was responding to Schumer's appearance on MSNBC, in which the Senate Minority Leader told Stephanie Ruhle that he and Pelosi are preparing a "Rooseveltian" coronavirus relief package.

“We need big, bold action," said Schumer, who aded that, "[Pelosi and I] "are working very closely together on putting together a very strong plan, which you will hear shortly."

“We need Franklin Rooseveltian-type action and we hope to take that in the House and Senate in a very big and bold way,” he added.

“The people like McConnell and [House Minority Leader Kevin] McCarthy [R-Calif.] and even [President] Trump, who say, ‘Let’s wait and do nothing,’ well, they remind me of the old Herbert Hoovers," Schumer said. "We had the Great Depression — Hoover said 'Let’s just wait it out. It got worse and worse.'"

“For Chuck Schumer to say that, they’re acting like it’s the impeachment all over again," Conway said. "It’s the Russian collusion investigation, it’s the next partisan witch hunt. Instead of saying ‘Hey, it’s great that we’ve already helped tens of thousands of businesses, millions of Americans in direct aid.’

"We’re hearing from the small business owners everyday that they were on the precipice of failure … and now they’re at least thriving,” Conway added.

The White House official also claimed that Schumer had “lied” by saying the Trump administration did not want to pursue any economic response to the pandemic.

“Who said 'We didn’t want to do anything, we’ll just do nothing'. Who said that?”