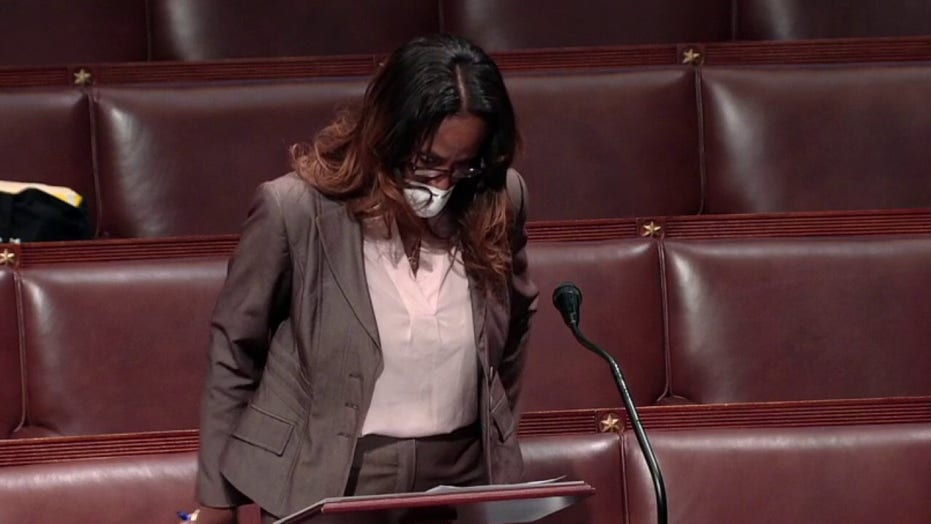 The legislation will deliver a $310 billion infusion to the Paycheck Protection Program (PPP), a forgivable loan program that ran out money last week amid skyrocketing demand from hurting small businesses. The Senate approved the legislation on Tuesday by voice vote.

The legislation passed 388 to 5 in the House, with one member voting present.

House Speaker Nancy Pelosi called the fourth bipartisan coronavirus legislation "historic" during a bill enrollment ceremony after the vote. Pelosi and Democratic leaders touted their efforts to extract concessions from the Senate and Trump Administration to target small business aid to minority-owned and disadvantaged businesses.

The legislation "took a giant step in loosening the hard grip of disparity of access to credit in our country," Pelosi said.

While both Republicans and Democrats supported the bill, they couldn't help but bash each other on the House floor in the hours leading up to the vote, accusing each other of playing politics by delaying the needed aid.

House Minority Leader Kevin McCarthy, R-Calif., said the additional funds for small businesses should have been passed immediately after the  Trump Administration on April 7 asked for $250 billion in emergency aid because the small business loan fund was running out of money.

McCarthy accused Pelosi of delaying the important aid for her additional demands at the cost of 4.4 million more Americans filing for unemployment benefits just last week -- bringing the total up to more than 26 million unemployment claims during the coronavirus pandemic.

"To those 4.4 million Americans that were laid off this week -- Congress owes you an apology," he said. "You did not have to have that happen."

But Pelosi and Democrats blasted the GOP for withholding vital support for hospitals and additional aid for disadvantaged small businesses, only to agree two weeks later.

"To say we delayed this, no, you delayed this," Pelosi said, directing her ire at the Republicans and singling out Senate Majority Leader Mitch McConnell.

Despite the bickering about the timing and politics of the bill, the legislation marks another resounding bipartisan response from Congress in the fight against the pandemic that has infected more than 840,000 people in the United States and killed more than 46,000 Americans.

"We do have a lot more work to do," said Rep. Harley Rouda, D-Calif. "And I hope we can continue to work in a bipartisan fashion, stop the partisan sniping and do what we were meant to do here to protect our country."

Democrats had been pushing for additional help for state and local governments that are running dry on revenue during the pandemic, but Republicans have refused and McConnell even suggested states should file for bankruptcy.

MCCONNELL SAYS STATES SHOULD BE ABLE TO DECLARE BANKRUPTCY, WANTS TO HIT 'PAUSE' ON FEDERAL AID

But instead of state and local funds, Democrats secured $75 billion for healthcare providers to support COVID-19 expenses and lost revenue due to the canceling of many elected procedures. And the package includes $25 billion to develop mass testing, with $11 billion earmarked for states and localities.

The Republicans voting “no” were Reps. Andy Biggs of Arizona, Ken Buck of Colorado, Jody Hice of Georgia and Thomas Massie of Kentucky. For Democrats, Rep. Alexandria Ocasio-Cortez of New York rejected the bill. Independent Rep. Justin Amash of Michigan voted present. Another 35 members were absent.

Despite a half-trillion in new aid, politicians downplayed Thursday's legislation as an "interim" bill or "Phase 3.5" because they have already started negotiating a larger stimulus package. While some Republicans want to wait on spending more money over debt concerns, the White House and Democrats view the next phase of legislation as a massive way to revive the economy with cash, including an infrastructure plan.

In the next round of funding, Democrats will prioritize funding for state and local governments and will dub it the "Heros Bill" to ensure public servants like first responders, public healthcare workers, teachers and transportation workers will be paid, Pelosi said.  Progressive Democrats also want more direct payments to Americans, mortgage and rent relief, healthcare help and student loan forgiveness.

Ocasio-Cortez, who represents one of the hardest-hit communities in New York, ripped the GOP for wanting to help big businesses that have gotten aid from the Paycheck Protection Program.

She voted against the bill for not going far enough to help people in need.

"We have to fight to fund hospitals. Fighting to fund testing. That is what we're fighting for in this bill," the liberal firebrand continued. "It is unconscionable. If you have urgency, you would legislate like rent was due on May 1."

This was the first time the House resumed session since March 27, when they passed the massive $2 trillion CARES Act by a voice vote. Much had changed in a month.

Lawmakers and staff wore masks in the House chamber. Members wiped down microphones and lecterns after they spoke. Voting took place in alphabetical waves to limit the number of people on the floor. The vote took one hour and 22 minutes to complete.

Some lawmakers expressed frustration the spending bill was worked out by leadership while lawmakers were home on a monthlong recess.

"Congress must convene not just today but every day until America's back on track," said Rep. Chip Roy, R-Texas, who blasted the current process as "half-assed legislating." He was admonished by the presiding officer for using "vulgarity" on the floor.

The debate on the House floor turned personal at times, showing the widespread health and economic grip the virus has had on the country.

Rep. Rashida Tlaib, D-Mich., got emotional on the House floor talking about a Detroit 5-year-old girl, Skylar Herbert, who died from COVID-19. She stood aside a big picture of the smiling girl, the daughter of first responders, as she pleaded for Congress to do more.

"Her death should be a wake-up call that we must act in urgency, " Tlaib said. "...It is immoral for us to walk away and take a month off when ... our neighbors are dying and losing loved ones."

Rep. Ben McAdams, D-Utah, returned to House floor to speak in favor of the bill after recovering from a nasty bout of COVID-19 that hospitalized the 45-year-old.

Small Business Committee Chair Rep. Nydia Velazquez, who also recovered from a presumed case of coronavirus, touted the improvements Democrats made to the bill to help underbanked small businesses and expand SBA aid.

"What we did in this bill was to make it better and more efficient," Velazquez said.

Rep. Maxine Waters, D-Calif., said she dedicated her vote Thursday in honor of her "dear sister who is dying in a hospital in St. Louis, Missouri right now infected by the coronavirus."

And many members brought stories of the troubles of the small businesses in their districts that are on the verge of shutting down because of government-ordered social distancing.

Rep. David Schweikert, R-Ariz., said the Washington delays on replenishing the small businesses were too long for tearful small business owners in a panic about having to lay off workers.

"We engaged in a type of cruelty around here," Schweikert said. "Because we sat here and engaged in partisan[ship.] We're better than this."