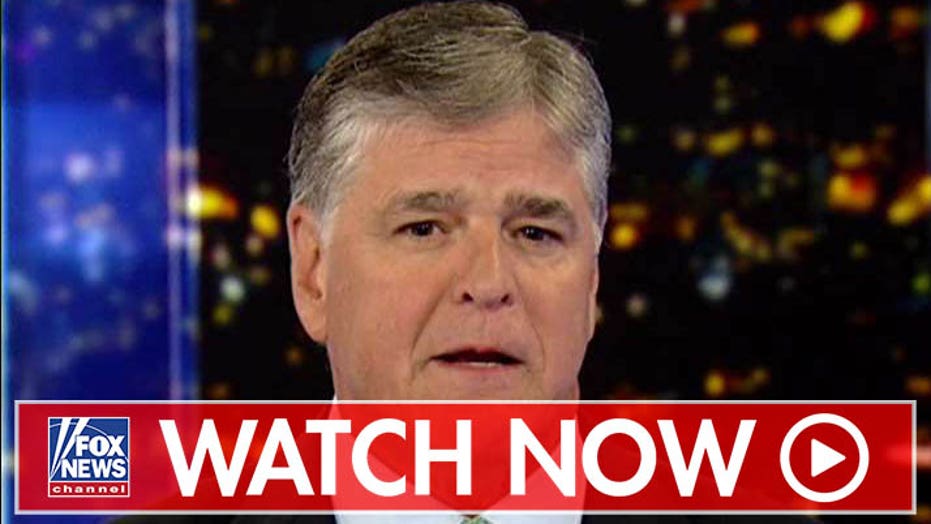 Fox News' Sean Hannity said Thursday that he believed many Democrats and media figures have been hypocritical in their coverage of President Trump and "the Squad" when it comes to Israel, saying the left's narrative against the president has shifted from Stormy Daniels to the Russia investigation to claims of racism -- and now, anti-Semitism.

"While the hysteria shifted, the goal remained unchanged," Hannity said during his opening monologue.

"Smear, slander, besmirch, destroy, bludgeon the Trump presidency," he continued. "Unfortunately for them, all the previous narratives ended in failure."

Hannity said The New York Times effectively dedicated much of its reporting to the Russia investigation in an anti-Trump light.

"After first dedicating their entire newsroom, as they say, to the Russian lie, conspiracy and hoax, now The New York Times is shifting their efforts to paint Trump and everyone in his orbit ... as a racist," the "Hannity" host said.

Hannity added that the media's current focus is a continuation of their work from previous election cycles, in which reporter's focus on claiming Republicans and conservatives are discriminatory on several fronts in the hope of electing Democrats.

"Every two and four years, the left in this country will accuse Republicans, conservatives, of being racist, sexist, misogynist, homophobic, xenophobic, Islamophobic ... and they want dirty air and water," he said.

"They are already breathlessly accusing Trump of bigotry, racism and even anti-Semitism," Hannity added.

He called the president the most loyal ally in the history of the Jewish state and dismissed those who have made claims to the contrary.

"These phony charges are coming from the very same Democratic Party that is the home to two of the most virulent anti-Semites to ever hold public office," he said, naming Reps. Rashida Tlaib, D-Mich., and Ilhan Omar, D-Minn.

"They both need an education about the horrors of what happened in the Holocaust," he added.

Hannity said Democrats and media figures accusing Trump of anti-Semitism should remember how he moved the U.S. embassy to the capital, Jerusalem, and recognized the sovereignty of the Golan Heights, calling anything to the contrary, "selective, fake moral outrage."