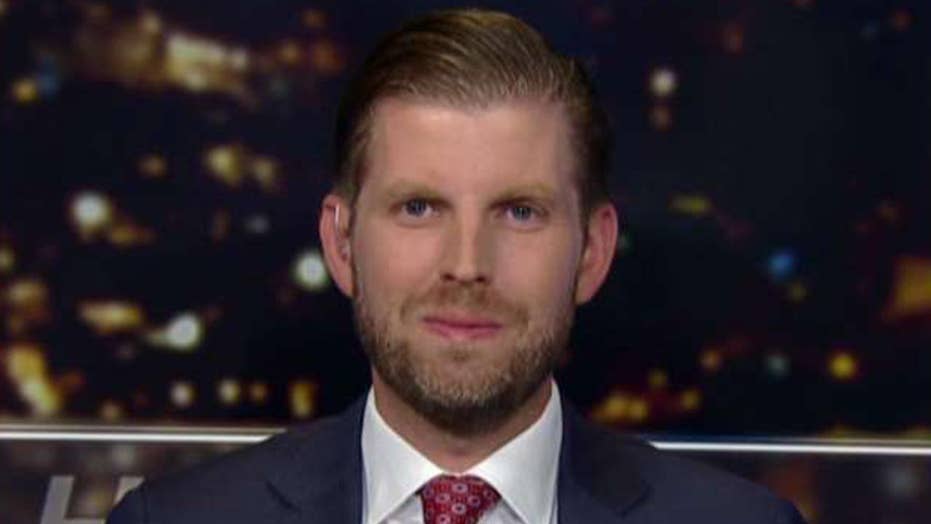 Eric Trump: Nancy Pelosi has gotten ahead of herself on impeachment

Former President Barack Obama has been conspicuously silent regarding the link between Ukraine and former Vice President Joe Biden and his son Hunter Biden, Eric Trump said Wednesday on "Hannity."

Trumps asked where Obama has been regarding the controversy -- including where Obama stands on the allegations that Joe Biden tried to exert influence on a Ukrainian prosecutor's investigation of an energy company executive with whom Hunter Biden was doing business.

LEGAL EXPERTS WEIGH IN AS WHITE HOUSE OBJECTS TO INQUIRY

"I want to see them put up Obama. Where is Obama?" Trump said, referring to congressional Democrats investigating his father, President Trump, over a July phone call with the Ukrainian president, in which Trump reportedly called for a Ukrainian investigation of the Bidens' activities there.

"He's the only guy who's hiding," Eric Trump said of Obama. "I mean, Joe Biden was his vice president. Where is Obama? What does he think about this rampant corruption?

"[Obama is] the only guy who's hiding. I mean, Joe Biden was his vice president. Where is Obama? What does he think about this rampant corruption?"

"What does he think about the fact that Joe Biden and his son were cashing in on the U.S. to line their own pockets? I mean, where is he on this. What's his opinion on this whole nonsense?"

Trump once again addressed what he described as a political double standard, saying if he had been accused of doing what Hunter Biden is accused of, the media would react differently.

Trump also took aim at Democrats for their impeachment inquiry against his father, saying House Speaker Nancy Pelosi has "put herself in a box."

The White House on Wednesday issued a defiant letter, saying it would not cooperate with the impeachment inquiry looking into Trump’s July 25 conversation with Ukrainian President Volodymyr Zelensky. Democrats claim that Trump urged Zelensky to investigate the Bidens as part of an alleged quid pro quo involving the withholding of U.S. military aid.

"They're doing this because they know they can't win in 2020," Trump told host Sean Hannity. "This is literally the only hope they have and Nancy Pelosi has gotten ahead of herself, like she has actually put herself in a box right now."

Trump added, "If they don't do something they're going to look like total clowns, which they've quite frankly been."