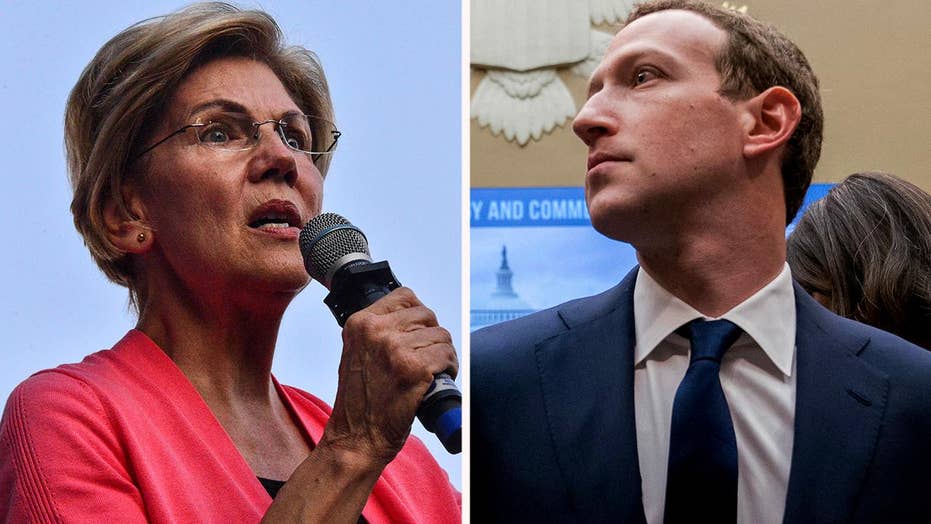 FCC Chairman Ajit Pai weighs in on a potential lawsuit between Facebook and the U.S. government and the court’s decision to end net neutrality rules.

Sen. Elizabeth Warren, D-Mass., laughed off the suggestion that Twitter ban President Trump after one of her 2020 primary opponents, Sen. Kamala Harris, D-Calif., called for his suspension from the vast social media platform.

"Should Donald Trump be banned from Twitter?" a reporter asked. Warren laughed and said simply, "No."

The comment came after Harris sent a letter to Twitter CEO Jack Dorsey on Tuesday, accusing the president of violating the company's terms of service. "I believe the president's recent tweets rise to the level that Twitter should consider suspending his account. When this kind of abuse is being spewed from the most powerful office in the United States, the stakes are too high to do nothing," she said.

She specifically pointed to tweets in which the president attacked House Intelligence Committee Chairman Adam Schiff, D-Calif., and suggested there would be "big consequences" for the whistleblower who reported on his call with Ukraine.

KAMALA HARRIS DOUBLES DOWN ON SUSPENDING TRUMP ON TWITTER, URGES CEO 'DO SOMETHING'

Harris also flagged a tweet in which Trump accused Democrats of engaging in a "coup." "Hey @jack. Time to do something about this," Harris tweeted, using the Twitter CEO's handle.

That prompted a clash among media figures as Five Thirty-Eight founder Nate Silver pushed back on removing Trump from his favored platform.

TRUMP BLASTS IMPEACHMENT PUSH AS A 'COUP,' CLAIMS IT IS 'INTENDED TO TAKE AWAY THE POWER OF THE PEOPLE'

Dorsey has faced criticism before for not banning Trump after the president tweeted that he had a "much bigger" button than North Korea for launching nukes.

“Twitter is endangering the world and breaking its own terms of service to do it. Trump or Jack must go,” Resistance San Francisco said at the beginning of 2018.

In a blog post around that time, Twitter put the kibosh on banning world leaders from the platform. "Twitter is here to serve and help advance the global, public conversation. Elected world leaders play a critical role in that conversation because of their outsized impact on our society," the post read.

"Blocking a world leader from Twitter or removing their controversial tweets would hide important information people should be able to see and debate. It would also not silence that leader, but it would certainly hamper necessary discussion around their words and actions."