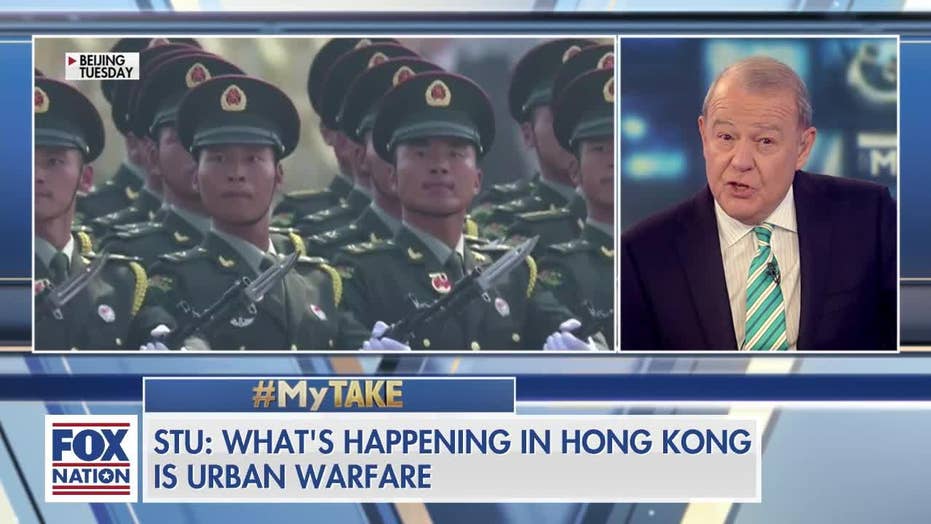 Varney says Hong Kong is engaging in 'urban warfare': 'We can't sugarcoat this'

Fox Business host Stuart Varney weighed in on the latest developments out of Hong Kong after a pro-democracy protester was shot by police on Tuesday — a new escalation in the widespread violence that comes as China marked the 70th anniversary of the Communist Party.

"Let's call it what it is: Urban warfare in Hong Kong...we can't sugarcoat this."

"Let's call it what it is: Urban warfare in Hong Kong...we can't sugarcoat this," Varney said on Fox Nation's "My Take." 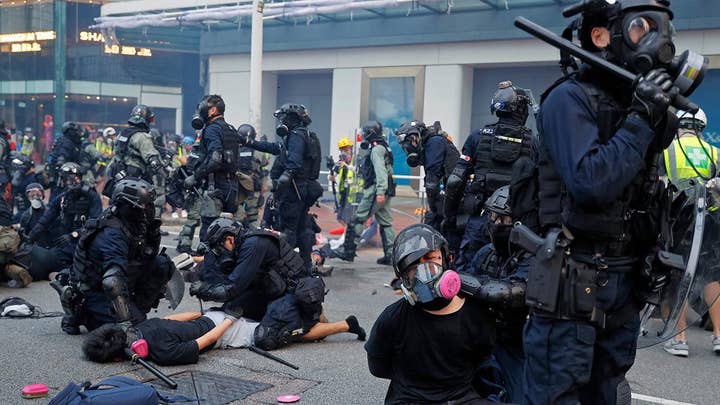 The protester was shot in the left side of the chest when a police officer opened fire with his revolver into a group, a police official said. It was the first time a protester has been shot as part of the unrest, which began in June of this year.

"There is blood on the streets. That is urban warfare. Both sides organized for battle. After that shooting, it's now a clear-cut fight. Hong Kong versus Beijing -- and neither side is going to back off," Varney said.

Video from the scene shows a dozen black-clad protesters hurling objects at a group of riot police pursuing them. One officer, who was surrounded, drew his revolver and pointed it at the group, before firing — leaving one protester to collapse on the street while others fled.

A medic treats a pro-Beijing man after he was hit by protesters for waving a Chinese national flag during a rally at Tamar park in Hong Kong, Saturday, Sept. 28, 2019. Thousands of people gathered Saturday for a rally in downtown Hong Kong, belting out songs, speeches and slogans to mark the fifth anniversary of the start of the 2014 Umbrella protest movement that called for democratic reforms in the semiautonomous Chinese territory. (AP Photo/Vincent Yu)

"They are squeezing our necks so we don't breathe the air of freedom," King Chan, a 57-year-old who came out to protest with her husband, told The Associated Press.

She was one of the thousands who confronted police in multiple locations across the city, the largest number of simultaneous protests since early June, which were sparked over a now-shelved extradition bill that activists say was an example of how Hong Kong's freedoms and citizen rights are being eroded.

The protests contrasted China's Communist Party celebrations on Tuesday in Beijing marking its 70th year in power which included a "display of military might," said Varney. 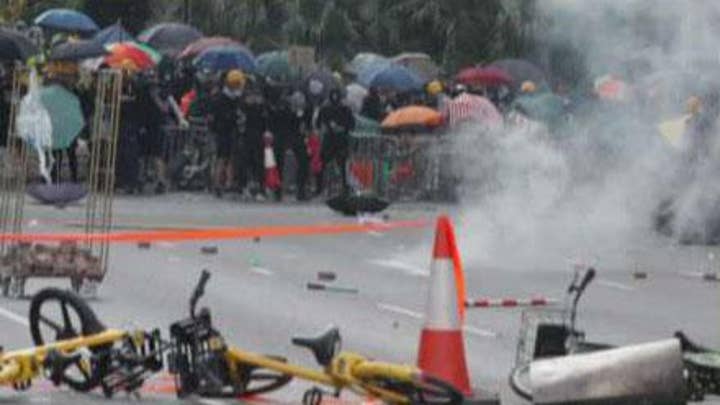 "Marching down the street, 15,000 troops and a series of new deadly weapons including hypersonic missiles and brand new carrier killers -- that is long-range missiles capable of rendering an American carrier battle group obsolete. That changes the military balance in the Pacific. That is a big deal," he said.

Varney also warned of the ramifications that a "bloodbath" in Hong Kong could have on the United States, urging the public "not to look away from the turmoil "on the other side of the world."

"We can’t look away...Asia is on the other side of the world but what's going on over there is having a profound effect on the world -- and it is not over."

"We can’t look away," Varney concluded, "Asia is on the other side of the world but what's going on over there is having a profound effect on the world -- and it is not over."