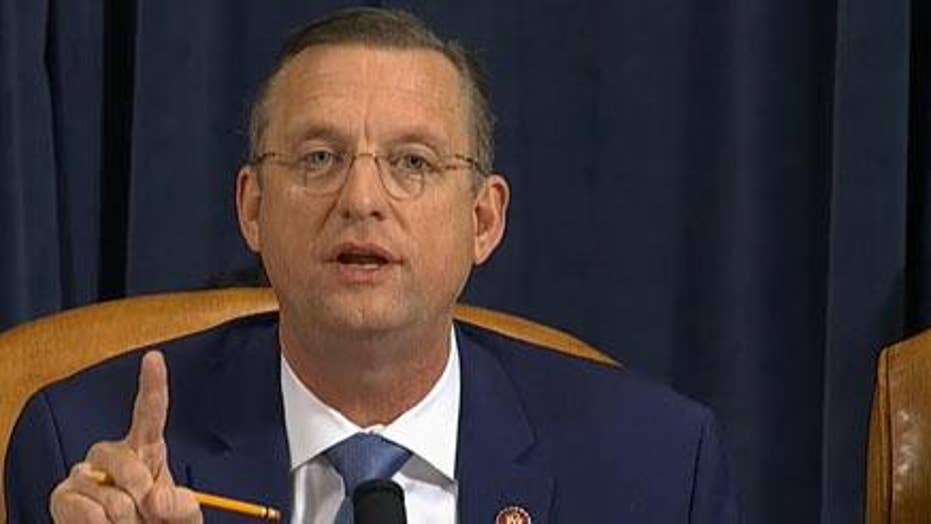 Doug Collins, House Judiciary Committee, comments on President Trump's letter to Nancy Pelosi and explains how impeachment is all about the 2020 election

Rep. Doug Collins, R-Ga. and ranking member of the House Judiciary Committee, said Wednesday that history will not remember Democrats' obsession with impeaching President Trump kindly and that their desperate efforts to oust the president are fueled by their need to win the election in 2020.

Appearing on "Fox & Friends" with hosts Steve Doocy, Ainsley Earhardt, and Brian Kilmeade, Collins said that the vote on impeachment on the House floor Wednesday is a "sad" culmination of Democrats' obsession with removing the president and that they have "trashed everything" in their singular pursuit.

Prior to Wednesday's historic vote on two articles of abuse of power and obstruction of Congress, there will be six hours of debate time allotted equally divided amongst the two sides. The vote is slated for 6 p.m. ET.

On Tuesday, President Trump sent a scathing six-page letter to House Speaker Nancy Pelosi, D-Calif., comparing their efforts to what happened in the Salem witch trials and labeling it illegal, partisan, and an attempted coup.

Pelosi then penned a letter to her colleagues about the vote, urging them to act and alleging that they would be derelict in their duty should they decide not to do so.

She will need 216 votes to pass the articles of impeachment, but she is well within that margin. That said, Republicans are expecting two to three defections from the Democrats.

The expectation is that the articles will be voted into the Senate and the trial will begin in January 2020.

According to The Washington Post, the president and his legal team are already lining up a plan of defense.

Trump has tweeted from the campaign trail from Battle Creek, Mich., continuing to insist that he "DID NOTHING WRONG!"

"A terrible Thing. Read the Transcripts. This should never happen to another President again, Say a PRAYER!" he wrote Wednesday morning.

"They so lowered the bar you don't have to jump now to get over for impeachment," he wrote. "Look this obstruction of Congress charge is Democrats like Adam Schiff and Speaker Pelosi and Jerry Nadler acting like petulant children. That's all they're doing here. They're sitting in the middle of the floor screaming and kicking their feet because they didn't get what they want."

Collins said that Democrats never had any intention of conducting a "true investigation."

"They just simply wanted to get at the president. So they said, at the end of the day, we can't form any crimes. It started the day after he was elected," he said. "And even this year, when they got the opportunity as a majority to impeach him, that's all they wanted to do."

Collins told the "Friends" hosts that Trump "simply came to Washington" to clean it up and "actually help people."

"They are mad at him because he's actually did what he said he would do. And, that's the part that bothers me the most, because history will record that we are in some of the best times we have ever had while the Democratic Party is simply looking out for elections," he said.

"What I would like to do is see this president continue to fight, just like he's always fought for himself and fought for this country."