Fox News contributor Jason Chaffetz agreed Wednesday with Rudy Giuliani's call for House Democrats to move past their impeachment push against President Trump, questioning what evidence or witnesses would be used in impeachment proceedings.

In an appearance on "The Ingraham Angle" Tuesday night, Giuliani, the former New York City mayor and current attorney for President Trump, marveled at top Democrats who are still pushing for impeachment despite the findings of the Mueller probe.

"I've never had a client that's been cleared three times. Once is usually enough, twice is ridiculous, three times?! He didn't collude with the Russians, he didn't obstruct justice. Get over it," said Giuliani.

REP AL GREEN RENEWS CALL TO IMPEACH TRUMP: 'WE CAN'T LET HIM WALK THE EARTH WITHOUT THAT STAIN' 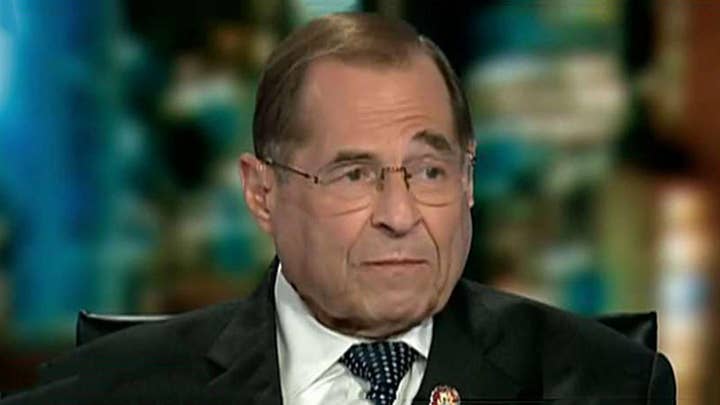 "For what? For what in the world are they going to impeach this president? They're doing so quietly because they don't have a case. They need evidence and they need witnesses and they have neither," said Chaffetz, the former Republican chairman of the House Oversight Committee, on "America's Newsroom."

Nadler confirmed last week that his committee has officially launched "formal impeachment proceedings" into the alleged misconduct of President Trump.

Appearing on CNN, Nadler said people shouldn't be "hung up on the semantics" since his committee is "investigating" the facts and evidence.

He said that he "wasn't waiting" for House Speaker Nancy Pelosi, D-Calif., who has been publicly reluctant to support impeachment, but added that she's been "very cooperative" with his investigation. After being pressed as to whether his investigation was considered "formal impeachment proceedings," Nadler insisted that's what it is.

Chaffetz said he expects Democrats to keep talking about impeachment when they return in September, especially if Nadler and other top Democrats, like Reps. Elijah Cummings, Adam Schiff and Maxine Waters, are focused on it.

"There used to be a time when I was in Congress when the national media would be all over you if you were fundraising off of something you were doing in terms of an investigation," he noted, arguing that Democrats have been planning for impeachment since last year's midterm elections and will continue to "fish" to find the necessary evidence.