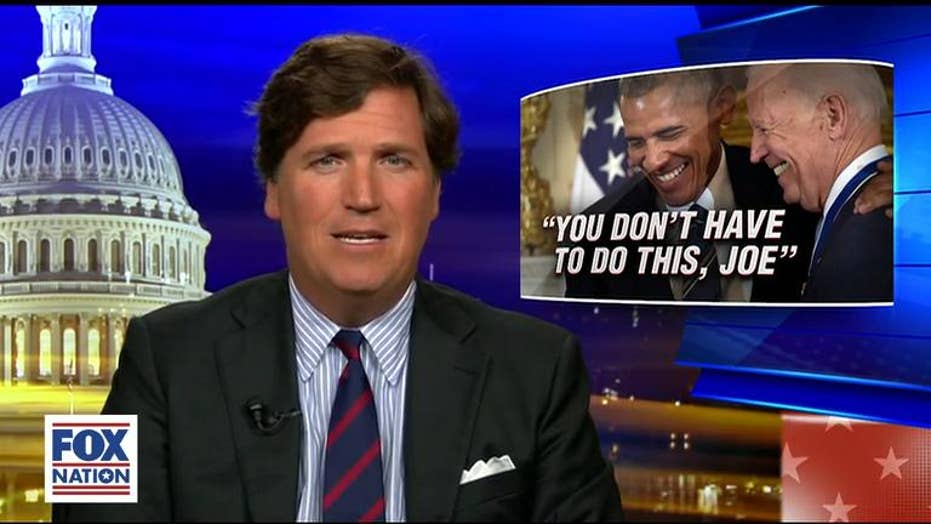 Carlson: Biden campaign is a 'zombie effort' that Obama has 'refused to endorse' because it detracts from his legacy

The campaign of former Vice President and 2020 frontrunner, Joe Biden, evoked the legacy of former President Barack Obama, as Biden for President launched its first television advertisements in Iowa.  According to Tucker Carlson, that's exactly what the former president does not want.

Last night on "Tucker Carlson Tonight", Carlson cited a recent New York Times report on the relationship between the two former running mates. "Instead of helping his trusted friend run for the presidency, Obama has refused to endorse Joe Biden.  According to some reports, Obama repeatedly urged Biden not to run. 'You don't have to do this,' he warned Biden," Tucker said.

The Times also reported that Obama "took pains to cast his doubts about the campaign in personal terms."

Despite that reporting, the Biden campaign is casting its effort as a return to to the Obama's years.  Biden for President campaign manager, Greg Schultz, wrote, "Vice President Biden will build on the progress made during the Obama-Biden Administration ... This election is about restoring strong, steady and stable leadership back to the White House ..."

President Barack Obama presents Vice President Joe Biden with the Presidential Medal of Freedom during a ceremony in the State Dining Room of the White House in Washington, Thursday, Jan. 12, 2017. (AP Photo/Susan Walsh) (Copyright 2017 The Associated Press. All rights reserved.)

According to Carlson, that's exactly what the former president is afraid of.  "Obama, it turns out, cares about one thing -- himself.  He's obsessed with his political legacy.  Every day that Biden stays on the campaign trail he is detracting from that legacy," Tucker said.

At the moment, the RealClearPolitics average of polls in the Democratic presidential primary shows Biden with a comfortable double-digit lead over with Democratic opponents.  Carlson says that too is a farce.  "Biden officially is still in the lead.  And yet, let's be completely honest.  Biden's campaign is not a real campaign.  It is a 'zombie effort'.  It lurches from one blunder to another until finally, some catastrophe will put it out of its misery.  Even Biden's own allies want him to stop speaking in public so often. Why?  Because when people actually see Joe Biden, they realize he's not a distinguished elder statesman.  He is, sadly, a fading one."

For a highlight reel of all the best moments from Fox News' primetime shows, visit Fox Nation and join today.