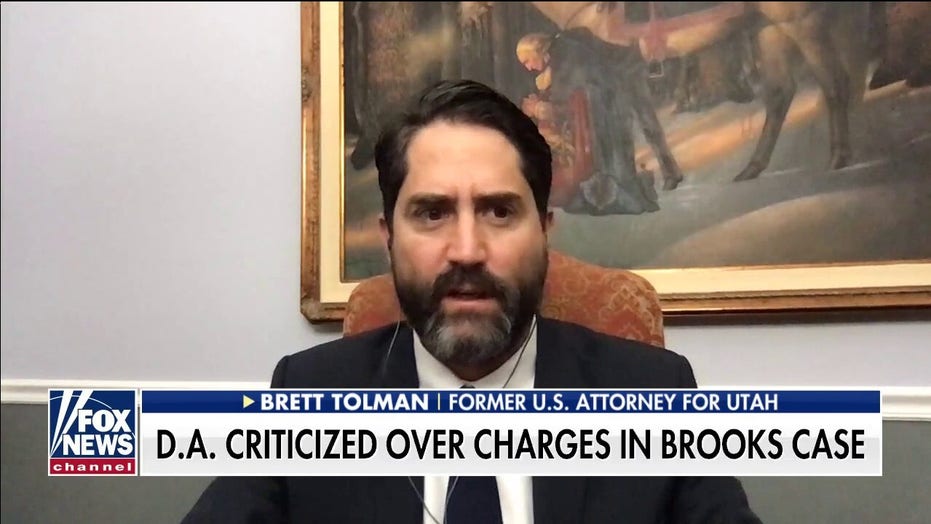 Fmr. US Atty Brett Tolman reacts after GA DA is criticized over charges in Brooks case

The Fulton County, Ga. district attorney who charged former Atlanta police officer Garrett Rolfe with murder -seems to be more concerned about politics and "the emotion of the moment" than he is about justice, former federal prosecutor Brett Tolman said Saturday.

Appearing on "Fox & Friends Weekend" with host Pete Hegseth, Tolman, also the former U.S. Attorney for the state of Utah, said that he believes D.A. Paul L. Howard Jr. has pressing personal issues that he is more concerned about than the case against the fired officers involved in the fatal shooting of 27-year-old Rayshard Brooks.

"There are allegations about this district attorney that are alarming," Tolman remarked. "Then you have this incident occur. And, you have him take the microphone and stand in front of the public before they’ve finished their investigation, before [they have] finalized what occurred, where the people were at, what the video [showed], what the audio tells us as we review it."

"Not only that, but he makes statements when he makes the announcement that, in my opinion, [are] an ethics violation by this prosecutor," he added.

"And, if I were instructing him, at a minimum I would ask that he recuse his office so that an independent office can look at this, assess all of the evidence that is there, and make an informed decision that...has the confidence that the community needs right now," Tolman stated.

Brooks, a father of four, was shot and killed outside a Wendy’s restaurant where he’d apparently fallen asleep in his car in the drive-thru lane. He allegedly failed a field sobriety test -- and ultimately was seen wrestling with the officers and running with one of their Tasers leading up to the shooting.

In a Tuesday news conference, Howard explained that investigators had reviewed at least eight videos of the incident, including police body and dashcam images as well as Wendy's surveillance footage and cellphone recordings taken by witnesses at the scene.

According to Howard, Brosnan had agreed to give a statement against Rolfe and become a "state's witness," but Brosnan's attorneys later disputed that claim.

However, following Howard's announcement on Wednesday, the Georgia Bureau of Investigation revealed via Twitter they were never consulted on the charges he had filed. In a Facebook post later in the day, they wrote that they were still in the process of conducting an impartial investigation and "have not completed [their] work."

Additionally, Howard is currently facing a criminal investigation and a primary runoff in a difficult fight to remain in office after his challenger secured more votes than he did in the June 9 primary.

Tolman told Hegseth he was not surprised that the cards were stacked in Howard's favor.

"When I was a prosecutor, I thought I was the greatest attorney in the world. I didn't realize when I was in the courtroom, I won all the time because the deck is stacked in favor of my side," he admitted.

Tolman also pointed to Howard's comments regarding charging the officers without using a grand jury.

"You know, this prosecutor made the comment that he wished he could charge this officer without using the grand jury," he said. "The grand jury is a safeguard and a requirement in Georgia. It's written in their constitution. It’s there because it is a message to that community that we will work together when we charge someone with a crime and we are arguing that we should take their liberty away.

"But, instead, he makes those statements and then other outrageous statements before he even understands the evidence."

On Thursday, both Rolfe and Brosnan surrendered to authorities a day after Howard filed charges against them.