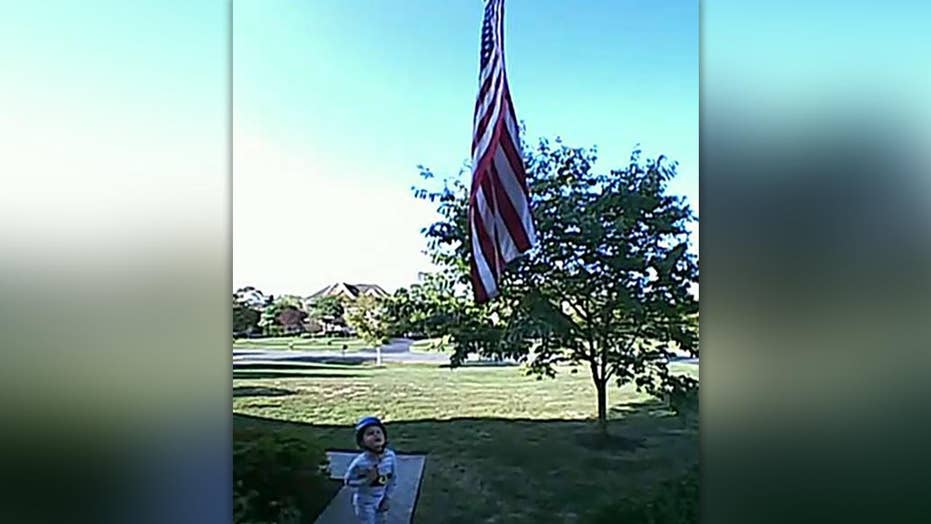 A family trying to catch who was vandalizing their American flag on their home surveillance system sees something a lot more patriotic and heartwarming. 5-year-old Preston Satterthwaite and his dad join 'Fox &amp; Friends.'

A Virginia family installed a doorbell camera to catch an American flag vandal, but instead they ended up with an adorable and now-viral video.

As they searched the footage for the culprit, Mike and Jessica Satterthwaite saw their five-year-old son, Preston, standing in front of the flag and reciting the Pledge of Allegiance.

In an interview Monday on “Fox & Friends," Mike Satterthwaite said his son helped him put the flag outside the front door around the Fourth of July.

FORMER PROFESSOR SUES OVER HECKLING DURING PLEDGE OF ALLEGIANCE

“As we were installing it [the American Flag], I was explaining the importance of why we respect the flag and how we could never let it hit the ground,” Satterthwaite recalled.

He said a few weeks ago the family noticed the flag was "ripped out" and on the ground as they drove Preston to school.

“Preston was pretty upset that the flag was touching the ground,” Satterthwaite said.

He said he was advised by his wife to install a Ring doorbell camera to keep a lookout for the person who may attempt to sabotage their American flag again. The couple discovered that after a recent bike ride with his dad, Preston had stopped to say the Pledge.

Preston, now in kindergarten, said he learned the Pledge of Allegiance at school and even recited it again on the show.