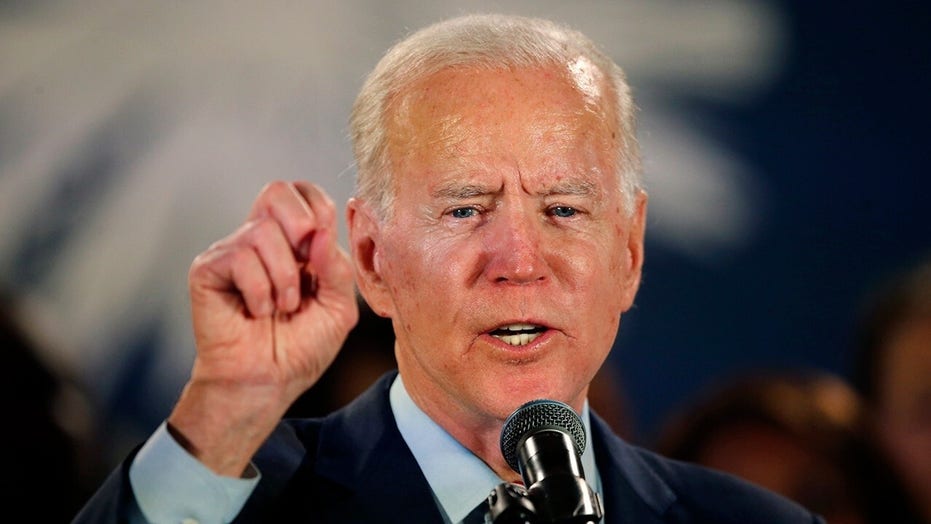 It was back in 2007 when I walked into a green room, saw Joe Biden and we started chatting about the presidential campaign he was launching.

The senator offered a succinct line about his chances, after his first campaign two decades earlier had ended with a plagiarism scandal.

“If I’m the right man for this moment, it will become known,” he said softly.

It became apparent in his disastrous finish in New Hampshire that, at 77, this does not seem to be Biden’s moment.

TRUMP’S BRAWLING STYLE IS ABOUT PROJECTING STRENGTH, NO MATTER THE COST

The press, which waited a year for Biden to collapse, is basically playing taps for his third and final run for the presidency. Now on one level this might seem wildly premature after just two small, predominantly white states have voted. Biden is right to say, as he did in South Carolina, that few African-American voters have had a chance to weigh in.

But he didn’t just lose the first two contests. For the former vice president to come in fifth in New Hampshire, in single digits, not winning a single delegate, after his fourth-place fiasco in Iowa is humiliating. He faces, at the least, a very tough comeback climb.

Politico quotes Quentin James, who runs a PAC for African-American candidates: “There is blood in the water. Black voters are starting to leave him now … A big reason lots of black voters were with Biden is they thought he was the best person to beat Trump.” And in an anonymous burst of candor, an unnamed Biden adviser says: “This is horrendous. We’re all scared.”

Why, then, are so many in the press discounting the Bernie Sanders victory?

The usual explanations—drawing a lot of flak online—are certainly valid. Sanders is a neighboring senator who was expected to win and still barely beat the previously obscure Pete Buttigieg. But it’s far deeper than that.

On paper, at least, Bernie is now the Democratic front-runner. It’s pretty clear that most of the press doesn’t like that idea. Why, Bernie isn’t even a real Democrat, the pundits say of the independent senator. This can’t last. A self-described democratic socialist can’t beat Donald Trump. Wait till he tries to defend abolishing private health insurance! So what if he just bounced back from a heart attack? Iowa and New Hampshire are being written off as an aberration.

As I noted yesterday, the media have fallen in love with Amy Klobuchar. If you stripped the results off the screen Tuesday night, you would have thought from the cable chatter that she had won New Hampshire.

(The pundits still love Pete Buttigieg, but that relationship has grown comfortable, and Amy is a new infatuation.)

Thus we have a separate piece in the New York Times: “How Amy Klobuchar Pulled Off the Big Surprise of the New Hampshire Primary.”

And in the Washington Post: “With Third-Place Finish, Klobuchar Bursts to the Center of the Democratic Presidential Race.”

Of course the Minnesota senator deserves credit for crashing the top tier. She’s also the kind of reasonable pragmatist that the Beltway press tends to adore.

And the positive pieces about Klobuchar and Buttigieg all note that they may be poorly equipped for the Nevada-South Carolina-Super Tuesday stage of the campaign, and have yet to demonstrate much black support.

As for Elizabeth Warren’s belly-flop in a neighboring state, the press can’t identify a state she could plausibly win and is assuming she’s toast.

The Bernie trajectory has set off something of a freakout among establishment pols and pundits. Times columnist Tom Friedman devoted a piece to praising the billionaire who skipped the first four contests but certainly has the resources to take on Trump:

“Bloomberg has the right stuff — a moderate progressive with a heart of gold but the toughness of a rattlesnake — for what is going to be an incredibly big, brutal task: making Donald Trump a one-term president.” (Friedman notes that Bloomberg Philanthropies has donated to his wife’s museum project.)

President Trump, who held a rally in New Hampshire on Monday, tweeted that “Fake News CNN and MSDNC have not surprisingly refused to talk about my record setting number of voters in New Hampshire (and in Iowa).” An incumbent essentially running unopposed doesn’t get much coverage for the primaries, but it’s true that Trump turned out more than 120,000 voters on Tuesday, compared with over 49,000 for Barack Obama in 2012.

With Biden an increasingly unlikely nominee, whoever wins this muddle of a Democratic race faces a tougher-than-expected challenge against a president who just beat impeachment.