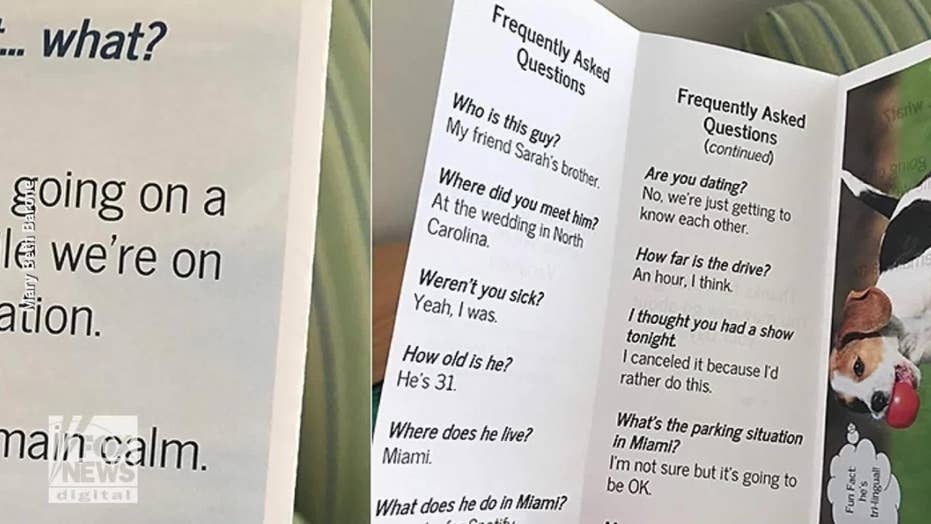 Comedian's idea to stop a barrage of family questions

A comedian from New York makes an informative pamphlet to keep her family from pestering her with questions about an upcoming date.

Anyone with a nosy family can relate.

A comedian from New York is sharing her ingenious idea for keeping her family from pestering her with questions about an upcoming date: She made them an informative pamphlet.

Mary Beth Barone, 27, came up with the idea before a family vacation Florida last year. Barone had connected with a friend’s brother at a wedding just weeks before, and he just so happened to live in Miami, about an hour away from where her large, extended family was planning on vacationing. The two agreed to meet up when she was in the area.

'TRICKLE-GHOSTING' IS THE LATEST DIGITAL DATING TREND, ACCORDING TO REDDIT

Knowing her family would have questions, Barone decided to print out a bunch of pamphlets titled, “I’m Going on a Date While We’re on Vacation,” in order to pre-emptively answer her family’s burning questions.

“I encourage anyone with a similar situation to make a pamphlet as an easy way to disseminate information,” Barone told Fox News, adding that “pamphlets are an underused medium” in general.

Inside the pamphlet were facts about why, when and where Barone would be going, or as she put it, “Everything you don’t actually need to know but definitely will ask.”

The pamphlet's "Frequently Asked Questions" section included, “Who is this guy?” (to which she wrote, “My friend Sarah’s brother”) as well as “Where did you meet him?” and “What does he do in Miami?” (“At the wedding in North Carolina” and “He works for Spotify,” respectively.) She also included a note about the “parking situation” in Miami, as she knew her father would be curious.

“I encourage anyone with a similar situation to make a pamphlet as an easy way to disseminate information,” Barone told Fox News (Mary Beth Barone)

And to top it off? A “fun fact” about her suitor on an adjacent page (he’s bilingual), juxtaposed with a photo of a puppy carrying a ball in its mouth.

SEE IT: MMA FIGHTER ASKS GIRLFRIEND TO MARRY HIM USING HIS TATTOO

Barone told Fox News the pamphlets worked as intended, leaving her family “sufficiently informed” before the date. But the idea also earned plenty of praise on Twitter, with one user calling her a “hero” and another labeling it a “boss move.”

“I am overwhelmed at the response to the pamphlet about my date. I didn’t realize how many people deal with the same line of questioning from their families,” Barone told Fox News. “My parents, siblings, and I have really enjoyed this whole thing. I’m lucky they are very supportive of me, even when putting them on blast for the sake of my comedy career.”

As for the love connection? Barone said on Twitter that she had a great time, but lost touch with her date about 11 months back.

“Date was great!!!” she wrote. “Things fell apart in the aftermath but luckily I still have the love and support of my family.”

She also shared a fun fact with Fox News readers who might want to try something similar: "Adding a fun fact where you can is a great way to make it exciting."