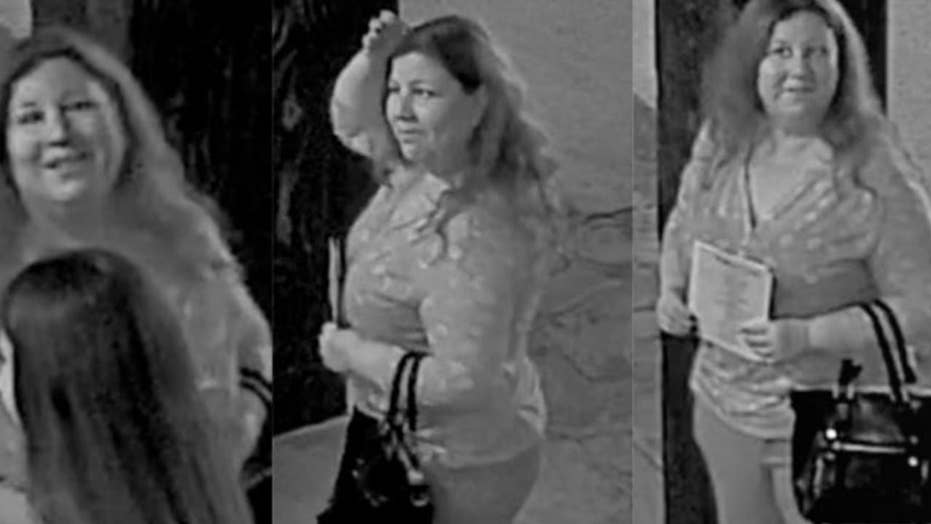 Texas law enforcement is asking the public for help identifying a woman linked to a series of thefts at wedding venues. Police say she arrives uninvited to weddings, poses as a guest and then steals the gifts.

This is not the surprise guest you want on your special day.

Authorities in Texas are asking the public for help identifying a woman who has been involved in a series of thefts at wedding venues over the past several months.

The Comal County Sheriff's Office is looking for "The Wedding Crasher," a woman who arrives uninvited at area weddings, posing as a guest, and then steals gifts. (Comal County Crime Stoppers)

The Comal County Sheriff’s Office said on Facebook that the woman, dubbed "The Wedding Crasher," has been frequenting wedding events in Comal County and the surrounding area while "preying on unsuspecting families and friends."

"The suspect arrives uninvited to weddings, poses as a guest and then steals the gifts," police said.

BRIDE CLAIMS SHE LOST 30 POUNDS BEFORE WEDDING WITHOUT EXERCISE

Dani Schick, who got married on Aug. 3 at a venue near Spring Branch, Texas, told WOAI/KABB-TV that sometime during the ceremony a woman dropped by posing as a guest before leaving with a few gift cards meant for the bride and groom.

‘We were a little upset at first,” he told the television station. “I guess more so just surprised."

Authorities have been investigating incidents involving the suspect since December, and said the woman usually takes off with gift cards, cash, and checks.

Detective Scott Frakes with the Comal County Sheriff's Office told WOAI/KABB-TV that after a wedding in December was targeted, another incident was reported in January.

BRIDE CARRIES HER PREMATURE BABY DOWN THE AISLE AT HOSPITAL WEDDING

Surveillance photos taken on Aug. 3 have helped deputies link the woman to gift cards she's been using at multiple stores. Authorities posted the images to Facebook in hopes of identifying the woman.

“We have good information right now we got two separate wedding venues that were hit within a couple hours of each other here recently,” Frakes said Monday.

Comal County Crime Stoppers said that anyone who helps identify the woman could be eligible for a cash reward of up to $4,000 for information that leads to an arrest and/or grand jury indictment in the case.

"Let’s not let her ruin anyone else’s special day and bring this crasher to justice," police said.

Those who wish to submit an anonymous tip can contact Comal County Crime Stoppers online, through the "P3 Tips” app for iOS or Android mobile devices, or by calling 1-800-620 TIPS (8422).