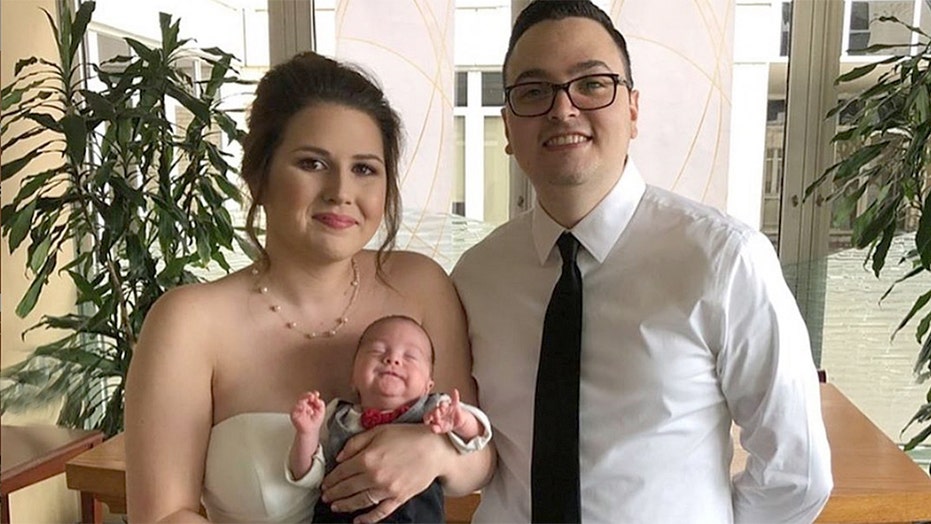 Report: August 18 the most popular wedding day of the year

One North Carolina bride was thrilled to carry a bundle of joy much more precious than any bouquet down the aisle at her recent hospital wedding – her newborn son, born two months premature.

Though newlyweds Amanda and Edwin Acevedo initially planned to tie the knot in a beachfront wedding, fate had other plans when their baby son, Oliver, was born early on June 14 – long before his August due date, Southern Living reports. The infant arrived in the world at 30 weeks, weighing 3 pounds, 14.6 ounces and measuring 17 inches long.

According to ABC 11, the Wake County-area couple then decided courthouse nuptials would be their best option, before a staffer at WakeMed Hospital in Raleigh offered an even better idea.

Though newlyweds Amanda and Edwin Acevedo initially planned to tie the knot in a beachfront wedding, fate had other plans when their baby son Oliver was born early on June 14. (Courtesy of WakeMed Hospitals)

Mallory Magelli McKeown, a WakeMed Family Navigator, suggested that the couple get married at the hospital so that little Oliver, who remained in the NICU, could attend.

The bride and groom looked sharp for the big day, with Oliver dressed up in a miniature suit-style outfit.  (Courtesy of WakeMed Hospitals)

The Acevedos loved the idea and gathered family and doctors, plus Oliver’s doctors, nurses and nurse practitioners for their special Aug. 6 wedding ceremony, as per ABC.

The new family looked sharp for the big day, with Oliver dressed up in a miniature suit-style outfit. McKeown even officiated the ceremony, ABC reports.

In lieu of a traditional bouquet, the proud mom carried her baby down the aisle as her “flowers,” reps for the hospital wrote on Instagram in a post that has since been liked over 350 times.

“There was not a dry eye in the chapel, and the room was filled with love and celebration for Amanda, Edwin and Oliver,” a spokesperson for WakeMed told Southern Living.

According to the outlet, the baby weighed almost 8 pounds at 37 weeks on the wedding day. Though Oliver remains in the NICU, he is reportedly “on track to go home very soon.”

“Could not have asked for a more special or memorable wedding, surrounded by family and the wonderful people taking care of my baby!” the happy bride wrote on Facebook. “Thank you WakeMed Children's for letting Oliver be a part of our day and everything else you do.”