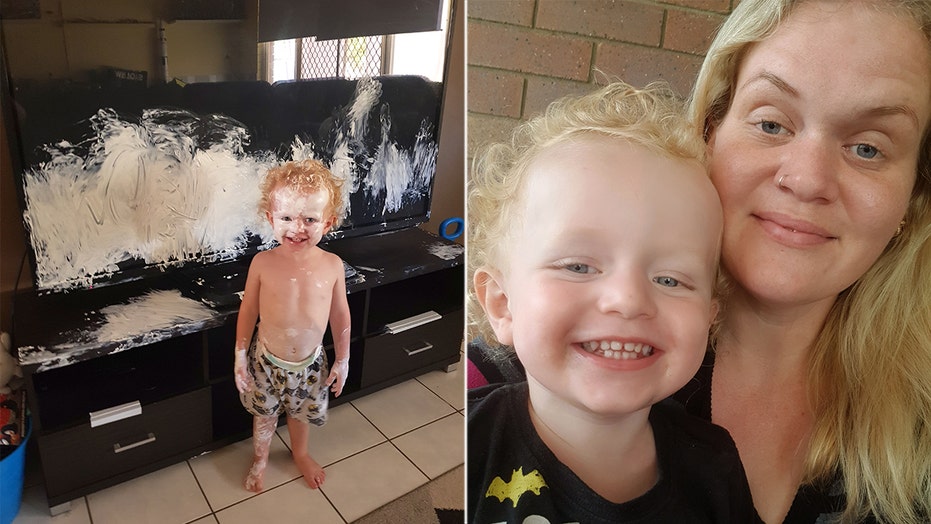 There’s nothing worse than finding nothing good on TV.

Unless, of course, you can’t watch the TV because it’s covered in cream. Unfortunately, that’s what every parent is risking when they leave a toddler alone for even just a few minutes.

Mom Sarah Wruck says that she can’t believe “how much damage he’d done in such a little amount of time.” (Caters)

Sarah Wruck shared pictures online of her toddler “painting” the family’s $2,000 television, The Sun reports. She says that her son grabbed a bottle of diaper rash lotion and made the mess all within the span of a few minutes after she stepped out of the room to prepare dinner.

“They were both happily together in the living room watching a movie when I got up to start making dinner,” she told The Sun of her toddler, Eli, and her other son, Ben. “I could hear that they were really quiet, and I know that when they’re quiet something is going on. I asked them what they were doing, and I heard ‘I’m painting!’ and I just thought oh no.”

Wruck was right to be concerned.

“Their dad had left the [diaper] cream on the changing table nearby, and Eli had gotten into it and smothered himself and the television with it,” she explained. “When I saw what happened, I screamed for my partner. He couldn’t believe it. I was experiencing a combination of laughing and crying.”

Wruck says that she can’t believe “how much damage he’d done in such a little amount of time.” According to her, she’d only been out of the room for "less than five minutes."

“It was just too quiet, and then the TV went off and I realized something weird was happening,” she said.

Fortunately, Wruck and her partner were able to clean off both the toddler (by giving him a bath) and the TV (which was considerably harder to clean). At least the television is safe from diaper rash for the time being.