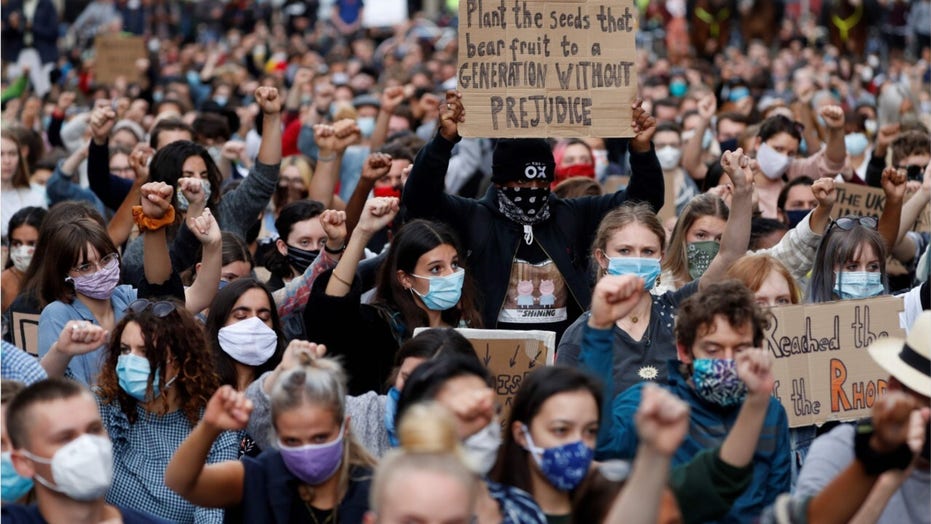 Are George Floyd protesters putting themselves at risk for the coronavirus?

As hundreds of thousands of people gather for the George Floyd protests, fears about the coronavirus are diminishing, but should those concerns be escalating instead? Johns Hopkins Senior Scholar, Dr. Amesh Adalja weighs in on if protesters could cause a spike in coronavirus cases or heard immunity.

Tinder users will no longer be banned from using the dating app to promote or fundraise for the Black Lives Matter movement after users claimed they had been suspended from the site for doing just that.

Though Tinder declared its support for the black community following the death of George Floyd and announced a donation to Black Lives Matter in a statement issued last month, the dating app allegedly banned users from raising awareness or funds for the effort through the platform.

In recent days, many Tinder users have come forward on Twitter to criticize the dating app for allegedly removing their accounts after adding "Black Lives Matter" to their profile bios, or asking matches to donate to personal drives or promoting petitions on the app

While the Tinder’s community guidelines state that people cannot use the app for promotional purposes and that soliciting is prohibited, the company has backtracked and will stop banning users from highlighting or fundraising for the Black Lives Matter movement and related causes on the app, a spokesperson told BuzzFeed News.

"From time to time, our members use Tinder to engage with topics they care about," the spokesperson said in an interview published Sunday. "And while our community guidelines state that we may remove accounts used for promotional purposes, we are dedicated to enforcing our guidelines in line with our values.”

"We have voiced our support for the Black Lives Matter movement and want our platform to be a place where our members can do the same," the spokesperson added, emphasizing the company’s support for the cause.

Tinder users will no longer be banned from using the dating app to promote or fundraise for the Black Lives Matter movement after people complained and claimed that they had been suspended from the site for doing just that. (Leon Neal/Getty Images)

Any users who believe their accounts were recently, wrongfully banned over the issue are encouraged to reach out to questions@gotinder.com.

Tinder was contacted for further comment and has not yet responded to Fox News.