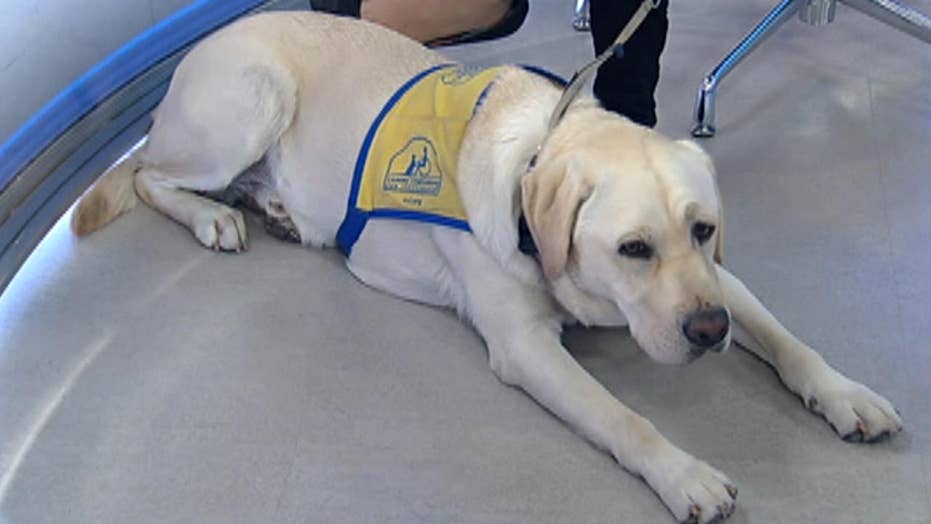 The joys and pains of raising a canine companion

Andrea McCarren describes what it was like raising a puppy for Canine Companions for Independence and then having to give the puppy back.

“Awwwwww. He’s so cute! How can you give Spike up?”

I get asked that question at least once a day. It’s one year from now and I can’t even think about having to give him up. Don’t ask me about it!

But I did ask Andrea McCarren about it.

McCarren is a wife, mom, investigative reporter for WUSA-9 in Washington, DC and she’s a Canine Companions for Independence volunteer puppy raiser. She’s been raising Nigel for the past 18 months and turns him in Friday.

It takes a lot to agree to raise a puppy. Starting at eight weeks old, you care for them, love them, train them, pay all their bills, take them everywhere with you and then…. give them up at about 18 months of age.

McCarren is passionate about Canine Companions and veterans issues. She’s one of the many incredible puppy raisers I’ve met through the organization, and she stopped at Fox on her way to turn in Nigel so I could ask her a few questions before parting with her sweet pup.

Fox News: Why did you decide to raise puppies for Canine Companions for Independence?

Andrea McCarren: I'm from a military family and I wanted to find a way to give back  Canine companions dogs either go to veterans or children or adults with disabilities. And I thought it was a great way to give back. I love dogs. I've always raised and trained dogs, just not for service.

What are some of the greatest rewards of raising a puppy for someone with a disability?

I never anticipated all that I would get back.  It's to the point where I almost feel guilty about how much I get back in terms of the people I've met along the way. I've had veterans come up to me in the street and just hug me thanking me for doing this. I was with a friend the other day and she said she would like to have a service dog at her side because “every single person who walked past smiled or said hello.” That doesn't happen when you don't have a dog at your side.

Our goal as puppy raisers is to give the gift of independence to someone. There are so many people, hundreds on the waitlist, waiting to get an assistance dog like Nigel. And why wouldn't I want to help that person? We have more than 20 veterans every day taking their own lives. We have hundreds of people with disabilities who could really use a little extra help. These dogs can turn on and off light switches, they can pull laundry out of a dryer, they can open a refrigerator, get a bottle of water, close the door. It's remarkable what they can do. They can even serve as hearing dogs where they can differentiate between a cell phone ring and a doorbell ring. They can do so much and improve or even save the lives of so many people. To me, it's an obligation and it's an honor to be able to raise a dog like this.

What will it be like turn Nigel in and say goodbye?

It is bittersweet. On one han,d it is absolutely heartbreaking to turn in the dog that has been with me 24/7 for the last 18 months. On the other han,d it's the first step in his future mission of helping a veteran or a child or adult with a disability. So it's an incredible privilege and it's incredibly rewarding to know that he will go on to change someone's life if not save a life.

My plan is I'm going to hold it together. Yesterday at the office, it was his last day at work and everyone was crying and he was getting a little out of sorts. I will keep it together until I literally walk across the stage hand over his leash and then I have a five or six hour drive home and I will probably sob the whole way.

Will you raise another dog for Canine Companions for Independence?

I will definitely raise another dog for Canine Companions for Independence. It will be the third service dog I have raised and the second for this organization. They call us serial puppy raisers. A lot of us literally turn in one dog and bring home a puppy that same day. At this point, I wish that's what I was doing but it just was not in the cards. But it's been an incredible experience. The irony is, in my workplace, we all helped raise this dog. And the notion was to make someone else's life better by raising this dog, but we all have become better people from this experience.

For more about Canine Companions for Independence, go to cci.org.