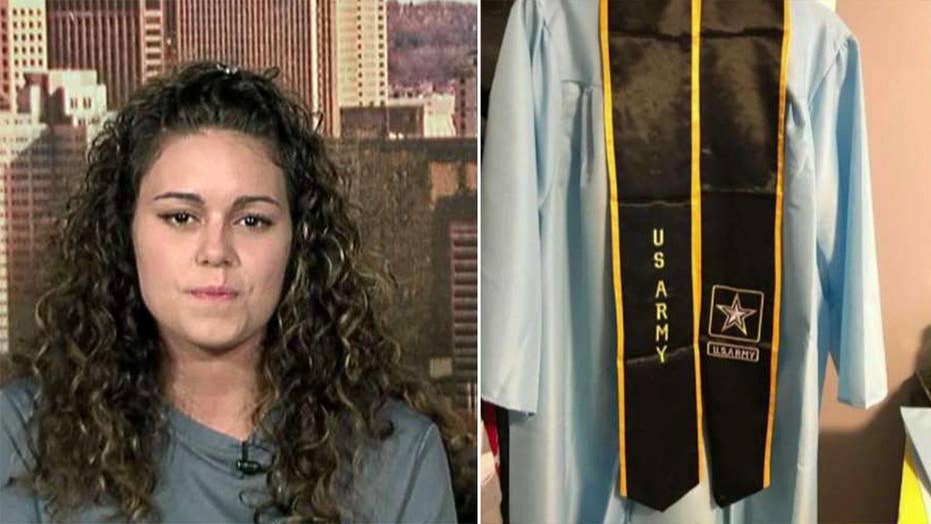 One Pennsylvania teen is upset that administrators at her high school shot down her request to graduate in her black and gold U.S. Army sash as it “didn'’t match school colors,” though she has signed enlistment papers and is headed to boot camp in August.

Despite her frustration, when Toni Kress attends graduation at Central Valley High School in Beaver County on June 1, she intends to respect school rules.

MEMORIAL DAY 2018: LARGEST PARADES IN THE US

“I’m very disappointed in the school,” he agreed. "She worked hard for this. She went through the ROTC program through the school. In today's world where we have kids out there eating Tide pods, she's willing to stand up and fight for her country.”

Toni Kress and her father Wayne say Toni will respect the school's rules and not wear the sash, but Wayne still says he's "disappointed" in the school's decision.

Though Kress claims there is no mention in the school handbook of any rules that would bar her from wearing the military sash on the big day with her powder blue graduation gown, Principal Shawn McCreary has other thoughts.

“Our graduation is a formal ceremony,” McCreary recently told The Times. “We do not permit students to wear anything on their gowns that depicts what their future plans may be.”

He also added that students must wear the standard gown, and those who graduate with highest honors are awarded a sash. National Honor Society members, too, can sport a gold cord and a pin.

McCreary said that students entering the military are individually recognized by name, and a medley of military service songs will play during the graduation ceremony.

“I think we do a very good job at our commencement ceremony honoring the past, present and future military members,” he said.

Despite the controversy, Kress is excited for all that is ahead.

“I am really stoked to serve my country, it's been my dream since I was a kid,” she told Fox and Friends.

Just days ago, in Nebraska, another high school senior spoke out for being denied the request to wear her Army sash at graduation as well.