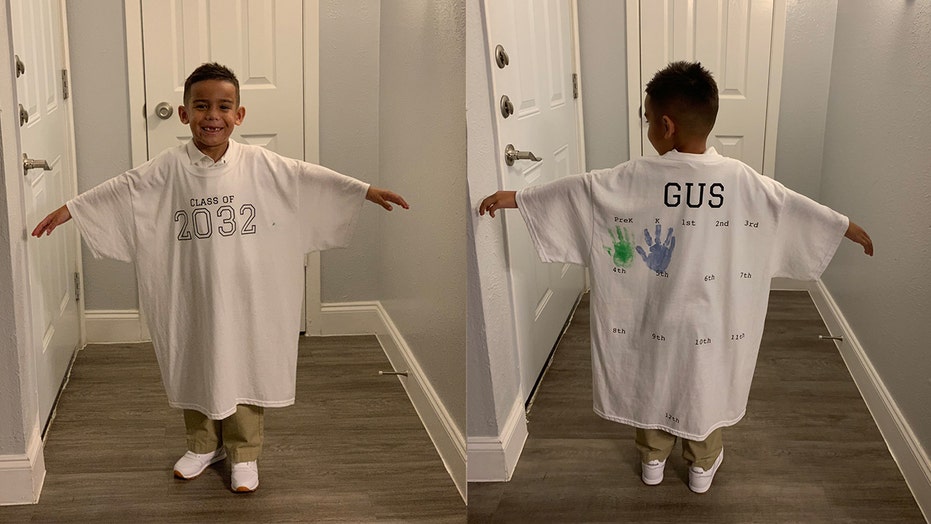 One creative mom in Texas is winning applause on social media after sharing a photo of her young son in an oversized T-shirt, which he’ll mark with a painted handprint in honor of the first day of school for the next 12 years.

The clever fashion statement has been met with a flood of requests for lookalike tees, while hitting all the right notes with commenters, who wished the family well.

Carina Cansino took to Twitter on Aug. 19 to share an adorable shot of her son Gus’ first day of kindergarten, in a post that has since gone viral with over 215,000 likes and 34,000 shares.

In the image, the boy beams in a large adult-sized T-shirt that nearly reaches to his wrists and ankles, featuring “Class of 2032” on the front and space for his handprint for every first day of school until graduating from twelfth grade.

“The concept is that every year on the first day we take a picture of him in it and by his senior year he will fit in the shirt and we’ll get to go through every school year photo and watch his growth,” the Dallas woman wrote of the idea.

Commenters had a whole lot to say about the clever idea, voicing their support and inquiring as to where they could purchase a similar T-shirt of their own.

“Why am I getting excited to watch him grow up?” one user wondered.

“If Gus says at any point that he’s too old for this, you better tell him his entire twitter family is waiting on the picture,” another joked.

Others got emotional over the boy’s journey ahead of growing up.

“Pass a hug to your wonderful young man, straight from a teacher from Poland!! And a reassuring word that it's going to be a great adventure,” a commenter gushed.

“Congratulations on a brilliant plan! Your little man is your inspiration, and I bet you are his,” another agreed.

Some shared similar traditions of the back-to-school tee their own kids sport, too.

Despite all the hype, Cansino said that she simply hopes that her son will cherish the item in the years to come.

“I wanted something that my son and I could enjoy not just now, but when he becomes an adult. I’m a sucker for keepsakes and sentimental valuables, so I know this would be perfect,” she told Business Insider. “I know one day we’ll both look back at all the photos and cherish all the great memories. It’s the best part of being a mom.”

“The concept is that every year on the first day we take a picture of him in it and by his senior year he will fit in the shirt and we’ll get to go through every school year photo and watch his growth,” proud mom Carina Cansino descrbied her son Gus' special shirt. (Courtesy of Carina Cansino)

Beyond the shirt, the young parent said she’s started a journal that she will ultimately give Gus when he graduates from high school.

“I started [it] his first year of school, along with the shirt, where I share stories, memories, and hardships we’ve overcome. He’ll be able to read it after his graduation,” she said. “I was a teen mom, and my son has been my drive for all my accomplishments. I want him to see how much of a blessing [he’s been] to me.”

Cansino describes herself on her YouTube channel as “young mom, here to help and advocate teen moms, young parents and young girls all around.”

In related news, a six-year-old boy in Georgia also made headlines earlier this month for planning to wear an anti-bullying T-shirt to his first day of school with the phrase, "I will be your friend."