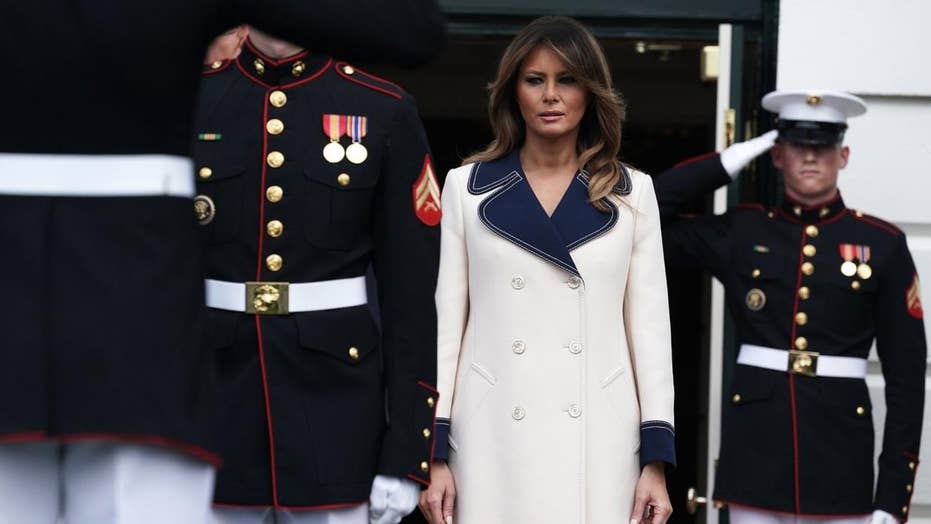 First lady Melania Trump donned a pricey Gucci coat when greeting the Polish first couple at the White House. The $3,980 coat was praised by some on social media while others had some questions about it.

First lady Melania Trump may have won a bit of praise for her latest look while welcoming Polish President Andrzej Duda and his wife to the White House on Tuesday — but she also left many style critics wondering why she wore a knee-length wool coat, as D.C. temperatures hovered around 80 degrees.

The Express described the 48-year-old FLOTUS’ outfit as “nautical” and chic, as she completed the look with navy pumps and a navy skirt, or perhaps a dress, underneath.

The double-breasted white and navy coat itself was accented with statement stitching and gold buttons, and was quickly identified as a Gucci piece retailing for $3,980.

Nevertheless, the Twitterverse was bursting with questions on the ensemble.

“Why is she wearing an overcoat … indoors?” one user wrote.

"No thing make guest feel the welcomes like when you leave heavy coat on all time in the doors," another mused.

Others described the move as "just weird."

Meanwhile, supporters voiced praise for the "fashion" of the design.

Others recalled another time that a jacket worn by FLOTUS caused a stir, when in June she donned an army green Zara anorak to a Texas facility housing migrant children with the words "I really don't care, do u?" emblazoned on the back.

President Trump later responded to the controversy over FLOTUS' Zara coat, claiming it "refers to the Fake News Media."

"Melania has learned how dishonest they are, and she truly no longer cares!" Trump tweeted.