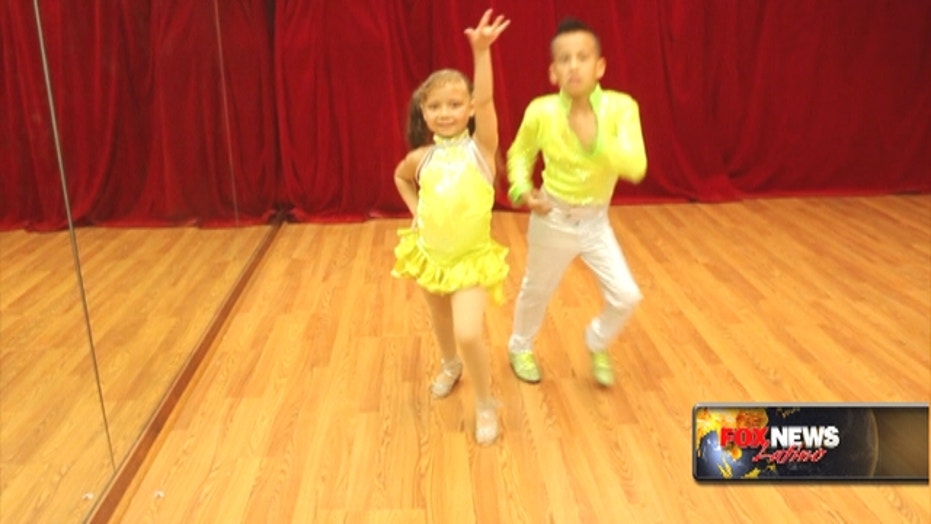 Cute salsa champs give it their all on the dance floor

At ages 7 and 10, Beberly Devers and Jerick Teran are blessed with a killer salsa beat.

At ages 7 and 10, Beberly Devers and Jerick Teran have already met more famous people and traveled more than the average kid – and all thanks to their speedy feet and their sweet salsa beat.

Beberly and Jerick make up a pint-size Colombian-style salsa couple that is killing it in competitions around the world.

This past February, they earned the much coveted championship at “Sabado Gigante,” the popular Univision TV show, where they went against two other magnificent kid-couples. It was hard to believe that the two had only been dancing together for only two months.

“He is cool, he’s nice … we get along,” said Beberly, who is part Dominican and part Colombian. “I like him because he dances all [types of] music!”

“Yes, I know how to dance … bachata, merengue, reggaeton, cumbia and samba,” said Jerick. “[And] I like dancing with Beberly because she moves her feet really fast.”

The tiny dancers, who attended the same dance school, became a couple last year, when
Beberly was looking for a new partner.

The 6-year-old was already a growing sensation when Jerick started dancing with her, just a little over six months ago, but he said he doesn’t feel overshadowed by little Beberly’s success. In fact, he’s also starting to shine just as bright.

“I’ve been to “Sabado Gigante,” and to congresses in Baltimore and Connecticut, and many more places!” said the kid, who is the son of an Ecuadorian and a Colombian. “The trip that I’ve liked the most was to Miami, when we competed.”

Beberly and Jerick have busy schedules between school and dance. The next few stops in their journey will be two opening performances for New York fashion shows in July, a special guest performance at the Boston Salsa Festival in August, and a week-long trip in September to Australia, where they will make a special appearance in the country’s version of “Dancing with the Stars.”

Beberly started shining back in December of 2013, when she became The Youngest Salsa World Champion at the World Latin Dance Cup just three weeks after turning six. “She still holds the title of the youngest winner,” adds her proud mom.

Months later, during a trip to the Israeli Salsa Congress, an audience member recorded Beberly and her partner at the time – and the video quickly went viral on YouTube.  From that point on Beberly has been invited to "The Ellen DeGeneres Show," "Ballando Con Le Stelle"(Italian version of “Dancing with the Stars”), "El Gordo y la Flaca,” “Al Punto with Jorge Ramos," "Despierta America" and many others.