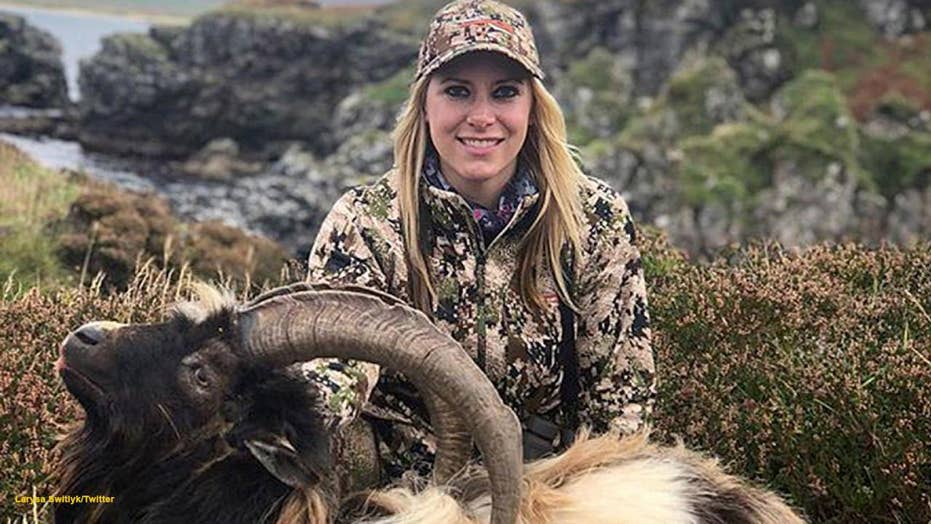 Larysa Switlyk, the host of “Larysa Unleashed,” was slammed on social media this week after posting a picture of herself with a dead goat during a hunting trip in Scotland.

Switlyk posted the photos of herself and a friend during their hunting trip in Scotland on her Twitter and Instagram pages Monday.

“Beautiful wild goat here on the Island of Islay in Scotland,” she tweeted, with a picture of the dead goat. “Such a fun hunt!! They live on the edge of the cliffs of the island and know how to hide well. We hunted hard for a big for 2 days and finally got on this group.”

Switlyk also posted a photo of her friend with a dead goat, congratulating him on his hunt.

“Congrats on Jason on his gold medal,” she wrote.

Several social media users criticized the host for posing with the dead animal, including the first minister of Scotland.

“A unique hunt? Disgraceful. It’s a goat. And it’s in Scotland. On a beautiful island. Stop this please,” Murray tweeted while tagging the Scottish government’s Twitter handle.

Human rights advocate Rob McDowall tweeted, “This is truly SICKENING! Someone comes to beautiful Islay in Scotland and decides to kill a wild goat and pose with it. This breaks my heart. We are better than this. This needs to stop!”

First Minister of Scotland Nicola Sturgeon even got wind of the pictures and tweeted her reaction.

“Totally understandable why the images from Islay of dead animals being held up as trophies is so upsetting and offensive to people. [The] Scottish Government will review the current situation and consider whether changes to the law are required,” she wrote.

The BBC reported the hunt was legal and the wild goats were “classed as an invasive, non-native species” in the United Kingdom.

“My ride has arrived – I’m headed out on a bush plane for my hunting adventure and will be out of service for two weeks. Nothing better than disconnecting from this social media driven world and connecting back with nature. Hopefully that will give enough time for all the ignorant people out there sending me death threats to get educated on hunting and conservation. FYI, I was in Scotland over a month ago,” she wrote.

According to Switlyk’s website, she earned degrees in accounting and worked as a certified public accountant in New York City but she “quickly realized she wasn’t a city girl.” Her show, which follows her as she “promotes the outdoor lifestyle,” can be viewed on YouTube and Amazon Prime, according to her website.