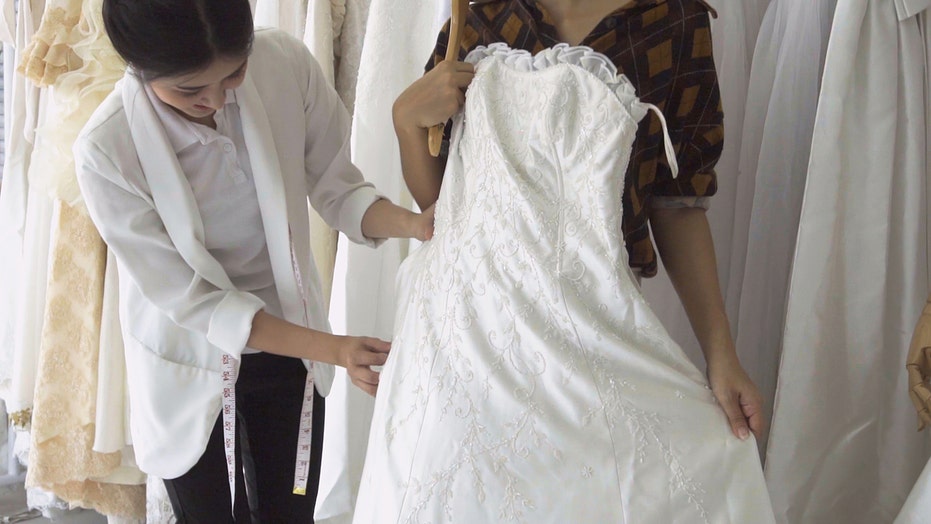 Reddit users slam a wedding guest for their 'gross' and ‘tacky’ response to an invitation.

Something tells us he’s not going to like the answer.

A groom-to-be recently took to Reddit to ask whether or not he was wrong for allegedly telling his fiancée that she shouldn’t buy the $950 wedding dress she wants, but rather a $50 knock-off.

The man, who posted under a throwaway account with the username “Josh8449,” began by explaining that he and his fiancée “Emma” were getting married in July and had everything “pretty much sorted” as far as the actual ceremony goes.

The one thing his bride-to-be hadn’t bought yet was a wedding dress.

Emma allegedly told him she was eyeing a gown that cost $950, as well as a $120 veil -- a move Josh didn’t understand because the couple “[isn’t] the extravagant type at all.”

Josh said he was also a bit peeved because they had jointly saved $10,000 for the wedding, and the dress would put a dent in their leftover honeymoon fund.

“I'm not trying to get her to cheap out on her dress but she will literally wear it once, one dress for over $1000 is just insane that would fund our honeymoon,” the Redditor complained. (iStock)

“I'm not trying to get her to cheap out on her dress but she will literally wear it once, one dress for over $1,000 is just insane [...] that would fund our honeymoon,” Josh said.

Josh added that he was going to wear his dad’s old tuxedo to save money. And while he understood that Emma couldn’t wear her mother’s gown -- “her and her mum both say the style hasn't aged well [which] is fair” -- he didn’t understand why she couldn’t find a cheaper, similar dress online.

“I had a quick Google around at dresses online and there were so many! [A]nd so many just like the one Emma wants for like $50 to $100,” he said.

“I tried to show her some dresses I found on [the Wish app] and others … but she was having none of it," he wrote.

Emma also offered to pay for the dress out of her own money and not their shared honeymoon fund, but Josh still wasn’t happy because “we [are] about to marry and our finances will be joined.” He also didn’t appreciate Emma’s mom offering to buy the dress.

The whole thing soon turned “nasty,” Josh said, adding that “Emma has been extremely cold to me” and acting like a “toddler.”

Josh claims Emma also questioned whether the two were too incompatible to marry, and went to stay with her parents.

Not surprisingly, the Reddit community largely agreed that, yes, Josh was wrong.

“Regardless of dress type, though, your reaction to her -- calling her names and deciding you have veto power -- is the real problem. You should be solving this issue together. If you can't, maybe it's not time to get married yet,” one user said.

“Most of the wedding guests would be arriving in more expensive attire, if $50-100 was her dress budget,” another wrote.

“Like seriously? Sorry… but your girlfriend deserves way better,” someone else claimed.

“If my fiancé called me a toddler for spending one grand of my own money on a reasonably-priced dress for our wedding, I'd be seriously reconsidering the marriage. That's such childish behavior,” another said.

Josh later updated his original post, stating that Emma found it on Reddit and that it was a “mistake” to air his grievances.

“Emma found this thread, it was a mistake to post here and [I’m] sorry I posted our problems on Reddit,” he said, adding the acronym “IATA,” which is an admission meaning “I am the a--h---.”