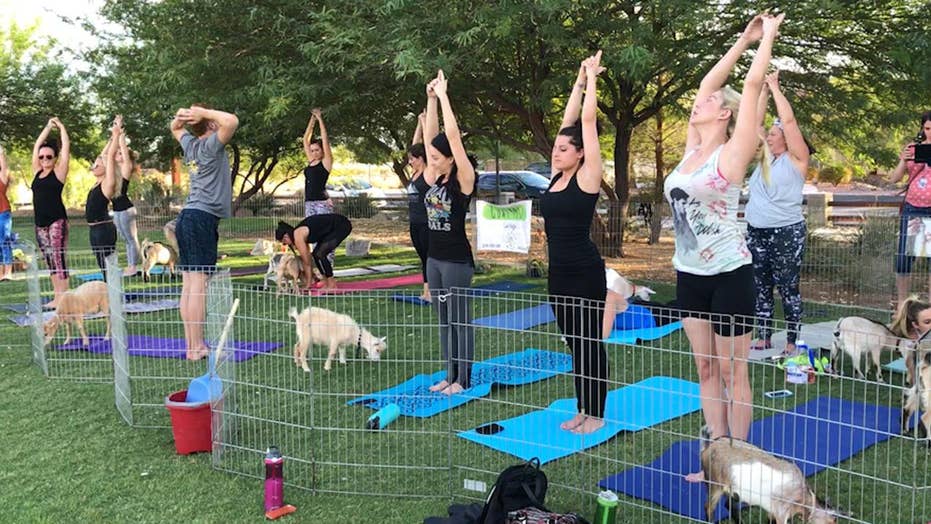 Goats get in the mix at Las Vegas yoga session

Yoga's foundations can be traced back thousands of years, and the practice has taken many different forms during that time. But one class in Las Vegas is expanding that definition to include goats.

Goat Yoga Las Vegas is a petting zoo of sorts that provides yoga enthusiasts with small goats with which to play and snap selfies.

HOW LONG SHOULD IT REALLY TAKE TO LOSE WEIGHT?

“It’s a different way to find inner peace, so basically you come to yoga class to find your center, to be relaxed, to ground yourself, and basically animals do the same thing,” said director Brandon Nobles, who believes that the animals can have a calming presence.

During his class, around 20 of the furry creatures are allowed to walk around in a fenced enclosure. Instructors place pellets of food on the backs of yogis, or underneath their yoga mats, as they do a pose.

"The first week was very interesting … it takes a special person to teach the class," said instructor Dylan Barnes. He also explained that he jumped at the chance to host a class, but claimed the goats took a while to warm up to him.

Barnes also acknowledged the small challenges in teaching goat yoga, including the fact that it takes place outside, and that the goats go to the bathroom quite frequently while the class is in session. But there is a safe word for that — it’s called “raisins” — and participants need only yell the word to alert another another instructor with a rake to clean up.

Nobles, however, admitted that participants might not find the exact same inner focus during goat yoga, but it comes close. “The smiling and laughing kind of achieves the same effect.”

Goat yoga is pretty safe, too, despite goats being characterized as annoying menaces who chew everything in sight. As Nobles points out, goats don’t actually have teeth: “They could gum you to death possibly, but they’re pretty little and the safety hazard is pretty low.”