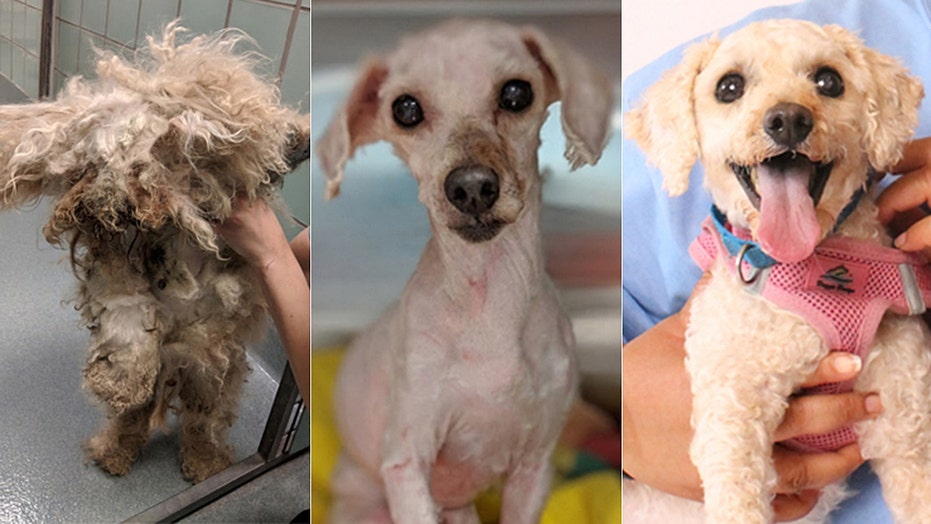 One neglected poodle in Virginia has found a safe, loving fur-ever home after receiving a “Cinderella” makeover from a no-kill shelter.

Reps for the nonprofit described the rescue as “one of the most shocking cases of neglect” they had ever encountered, sharing the good news that the dog has received the fairy-tail adoption he deserves.

Back in April, a seven-year-old pooch named Lionheart was surrendered to the Richmond SPCA by his owner, Today reports. The small dog had been living under a bed for two years and left utterly neglected, with his body covered in thick mats, feces and urine to the point that he could not walk, eat or drink properly upon arrival at the shelter.

Photos of Lionheart (now known as Cody) before, during and after his treatment and rehab at the Richmond SPCA.  (Richmond SPCA)

"I saw him when he first arrived, and I could not tell which was the front end and which was the back end," Robin Starr, CEO of the Richmond SPCA, recalled. "You couldn't see anything. I am sure he was in great discomfort."

Little Lionheart even had to be sedated to be shaved so that his care team could get to work addressing one of the “most shocking cases of neglect” they had ever seen, officials revealed on YouTube.

"Normally, we do bloodwork and everything on them, but you couldn't even get through the mats to find a vein," Dr. Angela Ivey, director of veterinary medical services for the organization, recalled to Today.

"He needed his teeth cleaned — they were horrible — and he needed to be neutered, and then we got all of his bloodwork and everything done at the same time," Ivey added.

The vet team later discovered that the poodle was also suffering from hookworms and skin sores.

Despite the slew of medical complications, after waking up from the anesthesia, Ivey described Lionheart as acting “like a different dog,” with a precious personality of happiness, energy and curiosity.

"It's a miracle that he was trusting people to begin with," the veterinarian said.

After three months of watchful care and rehab at the shelter, the pup was recently adopted by a “compassionate and very loving” family, an SPCA blog post reports.

Renamed “Cody” by his new owners, Starr said the poodle and his new family are living happily ever after.

"Cody goes everywhere with them, and they just adore him. It's the ultimate Cinderella story," she mused.