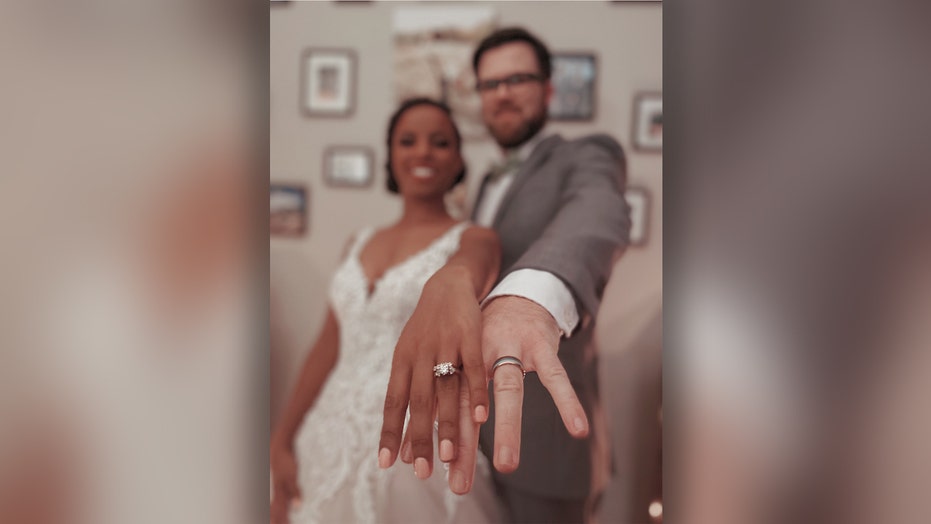 Couples get married virtually during the pandemic

Wedding planners say they aren't crossing out the idea of virtual weddings being a new business model for future couples.

The coronavirus pandemic and mandatory shelter-in-place policies are forcing couples to get extra close these days. However, finding yourself and your loved one together all day, every day for days on end can really test, or strengthen, a relationship -- be it an established marriage or new union.

According to The Knot, a leading wedding resource website, couples have reported both positive and negative effects, per a study conducted by The Knot and its relationship health app called Lasting.

More than 40 percent of couples are spending 20+ hours together more per week than usual because of self-quarantining. (iStock)

The findings, which were derived from data submitted via the app or through email, claimed that more than 40 percent of couples are spending 20-plus hours together more per week than usual, thanks to self-quarantine measures. During the extra time together, 51 percent of engaged couples and 66 percent of married couples have reported learning something new about their partners' snacking habits, future goals or how they handle stress.

Engaged couples, of which 86 percent polled said they were quarantining together, have reported spending more time binge-watching TV (71 percent), cooking (53 percent) and working out together (40 percent). One-third of engaged couples also reported having more sex than before the pandemic, The Knot claims.

According to the survey, the pandemic has actually had a positive effect on engaged couples, with 6 in 10 couples claiming sheltering in place with their loved one has strengthened their relationship. (iStock)

Despite the increased time together, only 18 percent reported being happy with how they communicate with their significant other.

"This is a unique time for couples. Social restrictions and financial uncertainty are two of the top contributors to increased stress, anxiety and conflict among individuals and their relationships," said Steven Dziedzic, founder of Lasting, in response to the survey results.

According to the survey, the pandemic has actually had a positive effect on engaged couples, with 6 in 10 couples claiming that their relationship has strengthened since sheltering in place. About 64 percent of engaged couples said the positive impact comes from finding new ways to spend quality time together while being stuck inside, as well as being forced to discuss challenging topics such as finances and unemployment, as well as preparing for potential illness.

Meanwhile, for those who were married, 29 percent reported their relationship weakening and experiencing an uptick in disagreements. Those with kids have reportedly been less likely to report a positive impact on their relationships, at just 49 percent, The Knot shared.

Those with kids have reportedly been less likely to report a positive impact on the relationship since quarantine. (iStock)

However, 62 percent of married couples without kids reported a positive impact from spending extra time together. Nearly one-third of couples overall reported being satisfied with the changes in their relationship prompted by the coronavirus.

Whether you’re engaged or married, though, there are plenty of ways to maintain a healthy relationship while in self-isolation.