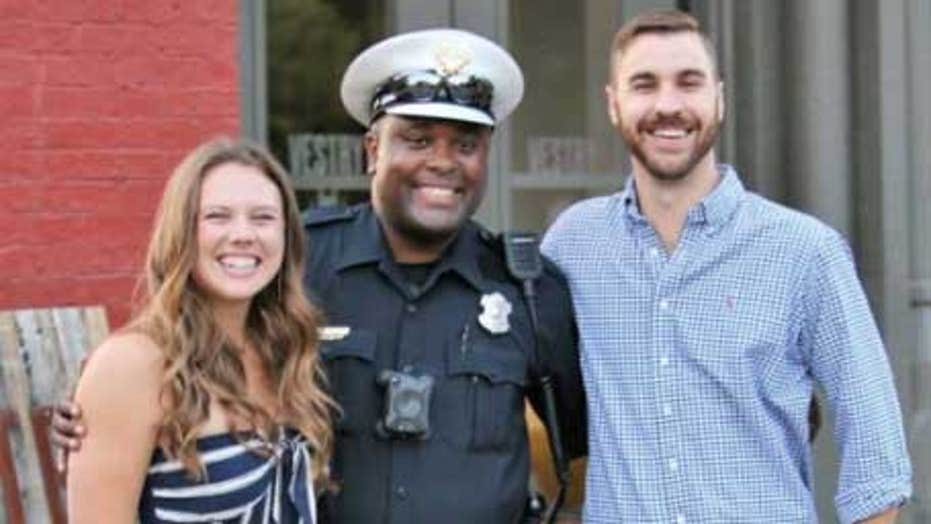 A mom from Ohio is thanking a thoughtful Cincinnati police officer for going "out of his way" to help with her daughter’s engagement.

Dianne Ruwe Shipley wrote a note to the Cincinnati Police Department earlier this month, praising Officer Darryl Tyus for trying his best to make sure the couple’s proposal went as smooth as possible.

PHOTO: MAN PROPOSES BY SPELLING OUT 'MARRY ME' WITH 15-MILE BIKE ROUTE

According to Shipley, her daughter’s boyfriend was planning to propose at Cincinnati’s Washington Park on Saturday, Aug. 3. Shipley's family knew in advance — and they were secretly waiting nearby to celebrate with the happy couple after the proposal — but Shipley kept trying to sneak a couple of “covert” photos anyway.

“Officer Tyus was on duty in Washington Park,” the proud mom wrote in her note, which the Cincinnati Police Department shared to Facebook this week. “He noticed our (covert) photography and became aware of the situation.”

“The public is quickly and consistently made aware of presumed indiscretions or missteps by law enforcement officers," the bride-to-be's mother wrote. ​​​"Seldom are citizens made aware of the positive actions of police officers." (Cincinnati Police Department)

Tyus then asked how he could help, and what the couple looked like, so he could start to divert other park-goers from the site of the proposal. He also took a snapshot of the pair and their parents after the boyfriend proposed, so they could all be in the picture together.

Afterward, Officer Tyus escorted the happy couple through the park, where the rest of their families were waiting to celebrate.

“Darryl went out of his way to enhance an already precious evening,” Shipley said.

The mother of the bride-to-be also took a moment to commend officers like Tyus, who don’t always get the recognition they deserve.

“The public is quickly and consistently made aware of presumed indiscretions or missteps by law enforcement officers," she wrote. "Seldom are citizens made aware of the positive actions of police officers."