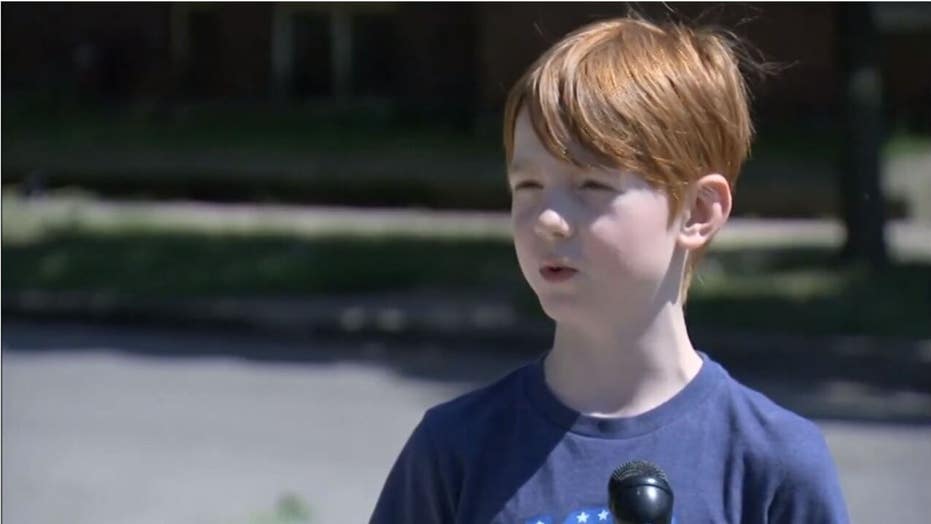 Aiden Kelley recently staged a solo Black Lives Matter demonstration in the front yard of his Chicago home. Photos of his peaceful protest have gone viral on Twitter.

One conscientious kid recently staged a solo Black Lives Matter protest in the front yard of his Chicago home, decorating the sidewalk with colorful chalk and marching with a homemade sign to demand peace and justice following the death of George Floyd while under in police custody.

Aiden Kelley, 9, went all-out for the lone demonstration on Saturday, Fox 8 reports, writing messages of hope and love with sidewalk chalk and carrying a Black Lives Matter sign outside of his house.

“I just wanted to like support like everyone and make sure everybody feels happy because there’s been a couple of crazy things happening over the past few days,” Kelley explained.

Katya Kelley, the boy’s mother, said her son was “very excited” to get involved after their neighbor drew hearts on the sidewalk of their South Shore neighborhood in solidarity with the movement, so he decided to take things a step further.

In addition to his sign, the little artist and activist had also set up a sandwich board, asking others to add to his sidewalk art as a reminder to “be kind and inspire one another.”

“I just didn’t want to just be out here with a crowd staring at me holding my sign,” Aiden explained. “I thought it would be better to just stand here and have people come and then ask them… if they want to draw and write something.”

A neighbor shared a photo of the third-grader’s peaceful protest to Twitter, where it has since gone wildly viral with nearly 640,000 likes and more than 85,000 shares. Commenters praised the boy’s honest efforts and said that his heartfelt intentions truly struck a chord.

“I am inspired at how these protests have shown us that no voice is too small to make a difference,” one user said.

"This generation gives me hope,” another echoed. “I see you little man. I see you.”

Responding to the overnight hype, Aiden said that he was simply trying to do the right thing.

“I just want everybody to be treated nicely and not anybody be treated differently,” he said.