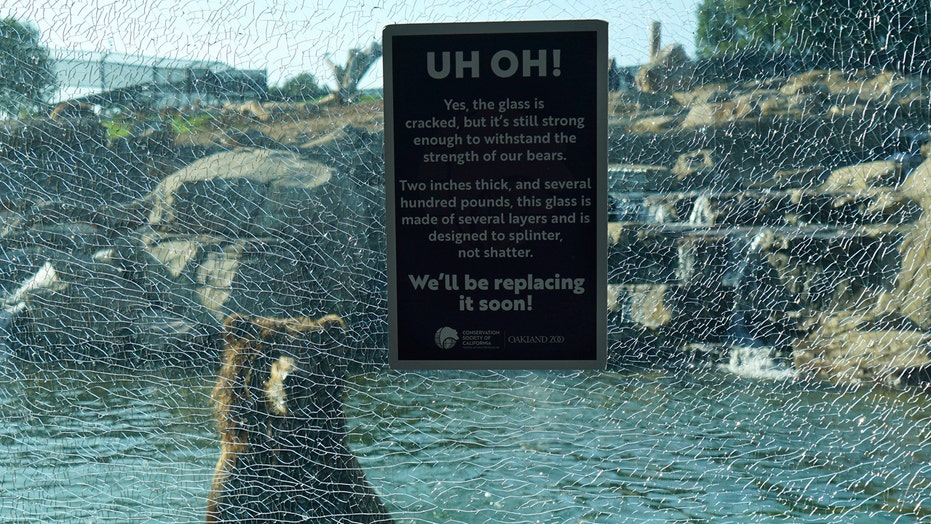 Visitors to the Oakland Zoo in California might be hesitant to visit the grizzly bears because of the visibly cracked glass at the exhibit, but officials said Tuesday that the animals aren’t at risk of getting out.

Oakland Zoo spokeswoman Erin Harrison confirmed on Tuesday that the glass was shattered – shockingly – after a child repeatedly hit it with a rock.

While the image of an 8 foot, 900-pound bear behind a broken glass might stop some people from visiting the exhibit, Harrison said it was only the “laminate layer” that was shattered.

A grizzly bear is seen behind the broken "laminate layer" at the Oakland Zoo. The laminate was reportedly cracked by a young child using a rock. (Oakland Zoo via AP)

She says the bulletproof-strength glass at the enclosure – where four grizzly bears live – is made of six separate panes, each of which is 1 inch thick.

“Yes, the glass is cracked but it’s still strong enough to withstand the strength of our bears,” a sign posted on the damaged glass read. "Two inches thick, and several hundred pounds, this glass is made of several layers and is designed to splinter, not shatter. We'll be replacing it soon."

The zoo is currently on the hook for the $67,000 it will cost to replace the glass. Officials were unable to locate the family after another visitor reported the child.