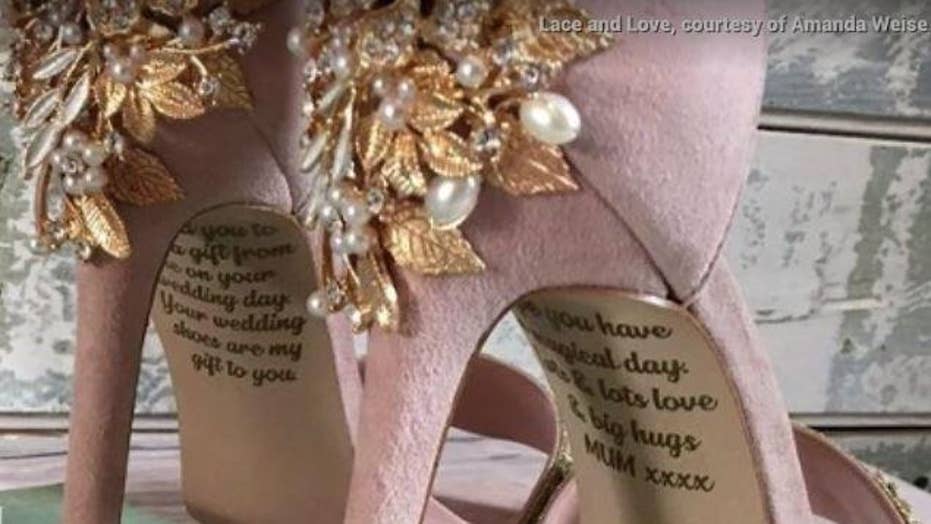 A bride in England is surprised with a secret message on her wedding heels from her late mother who died of terminal lung cancer.

One thoughtful mom made sure she would be able to walk down the aisle with her daughter on her wedding day — even though she knew she would lose her battle with cancer before the nuptials.

Bride-to-be Emma of Leicestershire, England got engaged in 2016, and had hoped that her mother would be by her side on the big day. Though her mom bravely battled a diagnosis of terminal lung cancer, the woman passed away in 2017, long before her daughter’s August 2019 wedding date.

Fast-forward to last week, and Emma was blown away when she received her bespoke pink suede wedding heels in the mail — the shoes had been paid for by her mother and inscribed with a “secret” message on the soles, as per BBC.

RISQUÉ 'MOTHER OF THE BRIDE' DRESS GOES VIRAL ON TWITTER, GETS MERCILESSLY TEASED

"Wanted you to have a gift from me on your wedding day. Your wedding shoes are my gift to you,” a note in gold script read. “Hope you have a magical day. Lots and lots of love and big hugs, MUM xxxx"

The 38-year-old bride, naturally, was overwhelmed with emotion, Metro reports.

"I started to cry... I was just absolutely in bits. I couldn't breathe, I couldn't talk,” she told BBC. "It's been so hard planning a wedding without having her with me, and I have had lots of tears."

Emma divulged that her fiancé, Richard, was in on the surprise, though the heels from heaven were an “absolute shock” to receive and indescribably sentimental.

Informed by doctors that she had one to two years to live after her diagnosis, Emma’s mother had been writing letters to family members, though she tragically and suddenly passed away before she could write her engaged daughter a note of her own.

Crafted by custom cobbler Lace and Love, designer Amanda Weise said that coordinating the special shoes was well worth the extra effort. Emma’s mom had secretly contacted Weise, detailing that she wouldn’t be there for her daughter’s wedding day, BBC reports. She asked to pay for the dainty, ankle-strap heels, add the secret message, and keep the details from Emma until she shipped out the order, which the designer agreed to.

“The shoes were a beautiful thing to be a part of. From designing them to match Emma's requirements to making sure I could get a message from her mum to add to the soles was a lot of pressure,” Weise told Fox News on March 15. “Especially while keeping it secret from Emma that her mum had paid for them and we were adding the secret message from her.”

“It was also very emotional knowing what these were going to mean to Emma so the pressure to get them right was even greater,” she continued. “I'm so proud to be able to give this gift to Emma and deliver what her mum wanted.”

Though Emma will not tie the knot for a few more months, the tale has since hit social media and touched the hearts of hundreds.

“What a beautiful story and of course shoes,” one fan wrote on Facebook.