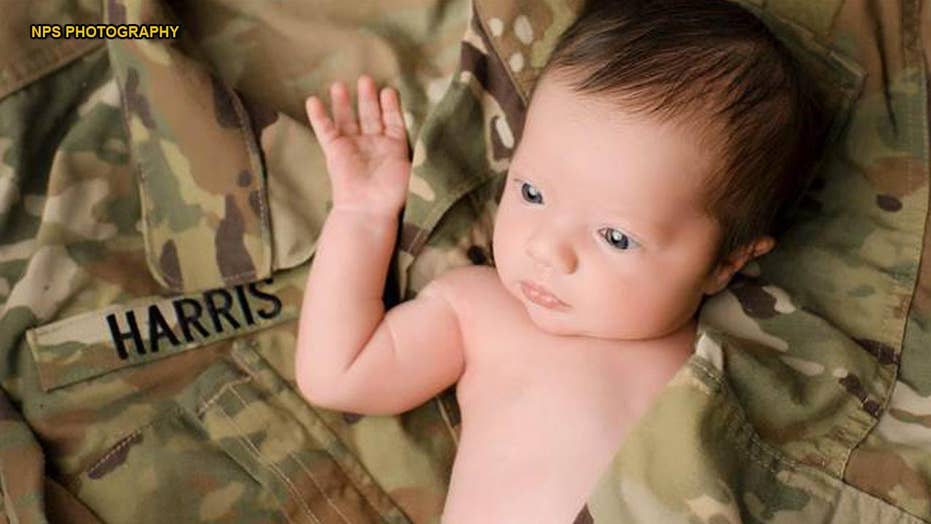 Britt Harris, the widow of U.S. Army Spc. Chris Harris, who was killed in Afghanistan, honors his memory with a patriotic photo shoot of their newborn daughter in his fatigues. Christian Michelle Harris was born March 17.

Britt Harris was six weeks pregnant in August 2017 when she learned that her husband, U.S. Army Spc. Chris Harris, was killed in a suicide bombing attack from a vehicle-borne explosive device on his first deployment to Afghanistan.

Heartbroken, Britt found strength in preparing to welcome their “little miracle” on her own and involved his regiment in the baby’s gender reveal that soon went viral. (WARNING: Footage contains excited soldiers briefly using strong language.)

"I want her to know that she's her dad's legacy. He never hesitated when it came to helping and would do anything to help others,” Britt told WFMY News 2 ahead of her daughter’s birth.

In the images, Christian sleeps peacefully next to her late father’s photo taken at their Fayetteville, N.C. home. (NPS Photography Pinehurst)

On March 17, St. Patrick’s Day, Chris and Britt's daughter, Christian Michelle Harris, was born. And in celebrating her arrival, the new mom had a touching vision in mind for an all-American photo shoot.

Celebrating her arrival, the new mom had an exact vision in mind for an all-American photo shoot. (NPS Photography Pinehurst)

"I wanted to capture as much of Chris' spirit as I could. He was extremely devoted to the Army and his country,” the 26-year-old told Today on April 2. “I thought nothing could be more fitting for her photos and [it would be] something she can look back on with pride."

In the images, Christian sleeps peacefully next to her late father’s photo, military uniform, boots, and American flag at their home in Fayetteville, N.C. As time passes and Christian grows up, Britt says that the pictures will always honor the father and daughter’s powerful bond.

"I wanted to capture as much of Chris’s spirit as I could. He was extremely devoted to the Army and his country,” Britt said. (NPS Photography Pinehurst)

"As soon as I saw the very first preview of the photos, I cried,” she said. “The picture of Christian wrapped with Chris’ uniform is my favorite. It makes me feel like he’s holding her."

Britt cited the photo of Christian with her late father's army uniform as her favorite. "It makes me feel like he's holding her." (NPS Photography Pinehurst)

Britt also recalled that her husband, while still overseas, was overjoyed with the good news that he was going to be a father.

“When I told him, it was the happiest I’d ever seen him. He was so excited,” Britt told WFMY.

Now, Britt will keep Chris’ memory alive as she raises their infant daughter.