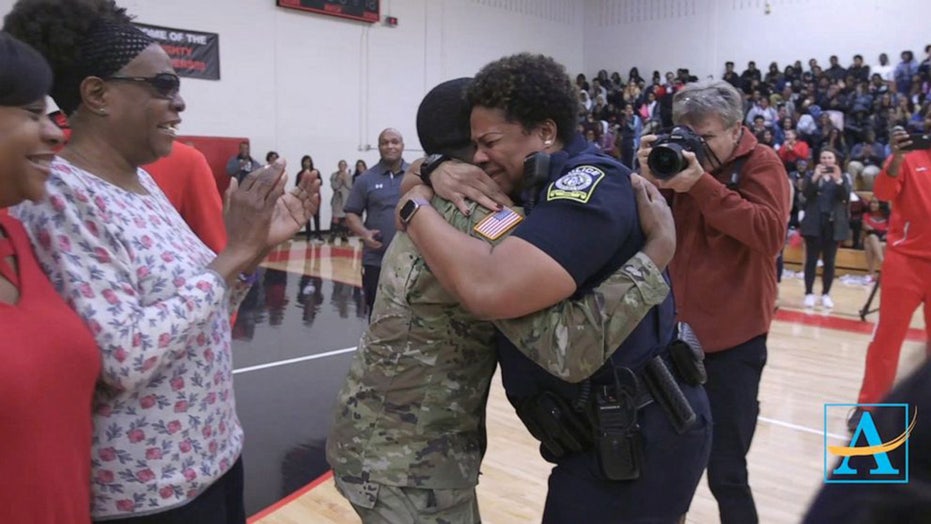 After a two-year deployment in South Korea, an Army soldier surprised his mother at a pep rally at the Atlanta high school where she works. Though his mom was totally shocked, the young man admitted that he’s had his homecoming surprise in the works “for years.”

Last Friday, D.M. Therrell High School held a spirit rally in honor of the boys’ basketball team, which is currently ranked No. 1 in the state as the defending Georgia AA champions, Fox 61 reports. At the event, school resource officer L.J. Williamson had no idea they’d be celebrating a whole lot more than the athletes — as her son, U.S. Army Spc. Shakir Aquil, waited in the wings.

In a heartwarming video that has since gone viral, Aquil jogged out from behind the basketball players and cheerleaders in his fatigues, to embrace his emotional mom with a bear hug.

CALIFORNIA WWII VETERAN, 104, ASKS FOR VALENTINE'S DAY CARDS: 'I'LL SAVE EVERY ONE'

The crowd went wild as the two wiped away tears during their reunion. The 22-year-old serviceman hadn't seen his mother since December 2017. He enlisted right after high school, completed basic training in Oklahoma and the headed for more training in Virginia before deployment to Seoul, where he has since served as an Army chef, Good Morning America reports.

In a heartwarming video that has since gone viral, Aquil jogged out from behind the basketball players and cheerleaders in his fatigues, to embrace his emotional mom with a bear hug. (William Tolbert/Atlanta Public Schools)

"I don't like showing emotion in front of people, and I try my best not to," Williamson told GMA. "As a police officer you're expected to be stern, and I thought, 'Why did he do this in front of all these people?'"

Aquil similarly described his mom as his “best friend” and explained how difficult it was to be away for so long.

"Honestly, it was pretty heartbreaking. I'd see other people with their parents, even in movies, and it was a very sensitive part,” he said.

"She made everything amazing in my life. She tries her best,” he added of their close relationship.

Aquil said he was determined to make the most of his return stateside after learning that he would have some time off before reporting to duty at Fort Lewis, near Seattle, for his next assignment — and one of his first thoughts was to surprise his family with a homecoming, Fox 61 reports.

"I've always wanted to do it, even since high school when I was looking into going into the Army and always watched the coming-home videos," he told GMA. "I've been planning this for years."

"She made everything amazing in my life. She tries her best,” the soldier commented of his close relationship with his mom. (Jasmine Mosley/Atlanta Public Schools)

Tricking his mom into believing he’d be back in Atlanta on Jan. 22, the soldier coordinated with Therrell High School to pull off the reveal.

After making the 19-hour trek from South Korea to Georgia, Aquil first surprised his 12-year-old brother Justin at school, before visiting their grandmother at her house. Then, they traveled to Therrell High School for the grandest surprise of all.

Admitting that he got a bit nervous before the big moment, Aquil said the excitement of seeing his mom again carried him through.

"I didn't even want to wait for the pep rally. I just wanted to see my mom,” he said.

Now, the family plans to make the most of their time together by “dancing, singing, cooking and hanging out” before Aquil reports to Seattle in February, Williamson said.

And with her son ready to dazzle his folks with his culinary chops, Williamson said she’s most looking forward to lobster tail, according to Fox 61.