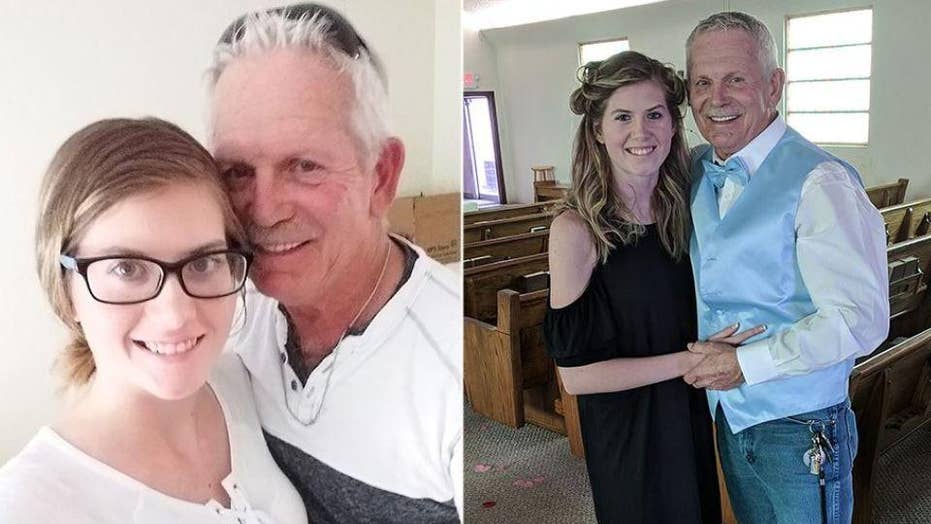 19-year-old Samantha Simpson defends her marriage to her 62-year-old husband, JR.The two currently live in Wichita, Kansas, but Samantha reportedly says that they are still battered by 'daily abuse' when it comes to their relationship.

Hopeless romantics would likely agree that love knows no age, but a married couple with 43 years difference between them say they are simply "exhausted" by the criticism and skeptic looks they get almost on a daily basis.

Just weeks after her one-year wedding anniversary, 19-year-old Samantha Simpson spoke to the media for the first time about her relationship with her 62-year-old hubby, JR.

Though the two are currently living in happily wedded bliss in their recently purchased home in Wichita, Kan., Samantha says that they are still battered by “daily abuse” from strangers, who often mistake the couple for a granddaughter and grandfather, The Sun reports.

“It's even worse when people call JR a 'child snatcher' or a 'pedophile' when they see us hold hands or kiss in public,” Samantha, a student, told The Sun. "There's not a moment when we are out and about that someone doesn't make a comment about our relationship, and it's just exhausting.

"We have had enough of a hard time with family and friends not accepting our relationship, that when strangers do it too it just becomes too much,” she continued. “We just want people to realize that we are happily married and serious about our relationship — and other people shouldn't be discriminating us in such a way."

According to the outlet, Samantha first met JR through mutual friends at age 18, and she was immediately dazzled by his maturity and kind demeanor.

"When I saw JR I was automatically drawn to how well presented he was and the fact that he was such a gentleman,” the Arkansas native said. "He was very well spoken whenever we met, and also when we would talk over the phone and text, he was just something I had never found in a man before.”

"I have dated men who have been closer to my age before, but they've been very immature and haven't known how to treat their partner,” the newlywed continued. “Being with JR is completely different — he's so mature and treats me like a queen, there's nothing that I would change about him or our relationship."

After celebrating their one-year wedding anniversary on Jan. 8, the couple now has their sights set on starting a family – and say that the timing couldn’t be better.

"We are currently trying to get pregnant as we feel the time is right — we've just got married and we have our own place, so why wouldn't we want to?” Samantha said.

In a larger sense, the Sunflower State woman hopes that publically speaking out about her relationship will give nosey strangers the clarity they’re evidently searching for as to why the couple are together — and so in love.

"We hope that by sharing the story of our relationship, people will realize that it isn't a joke and we are very serious about one another despite our age gap and appearances,” Samantha mused.

“He’s already got a child. You,” one cynic quipped.

“Love is Always there , for People who are Open for it!” another countered.

“It must be love,” another opined of Samantha and JR’s happily ever after.