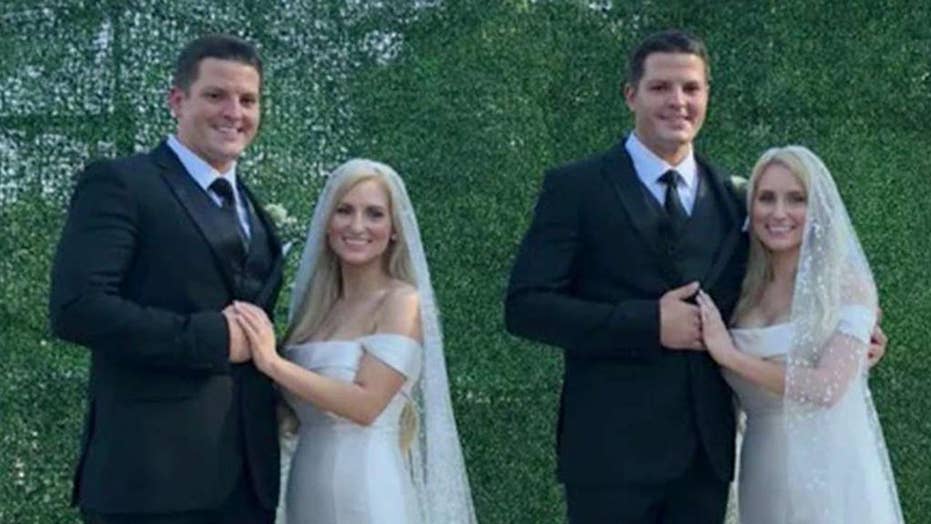 Brittany and Briana (née Deane) and Josh and Jeremy Salyers are enjoying double the newlywed bliss, after the identical twin sisters married the identical twin brothers in a “double fairy tale” ceremony that marked a respective “lifelong dream” come true for the foursome.

On Aug. 4 of last year, the Virginia brides and Maryland grooms tied the knot at Ohio’s Twins Days festival, exactly one year after meeting at the famous Twinsburg gathering.

Briana and Jeremy (left) and Brittany and Josh (right) tied the knot at Ohio’s Twins Days festival on Aug. 4, 2018, exactly one year after meeting at the famous Twinsburg gathering. (Angie Candell/www.angiecandell.com)

Now, the two new Mr. and Mrs. Salyers have given fans an unprecedented glimpse of their twin-sane lives with never-before-seen footage of their big day with a new TLC special aptly titled “Our Twinsane Wedding.”

In honor of the occasion, the couples spoke exclusively with Fox News Lifestyle, dishing what it’s like to all live together under one roof, the weirdest question they get asked, their thoughts on returning to television, and their hopes for starting a family in 2019.

Now, the two new Mr. and Mrs. Salyers have given fans an unprecedented glimpse of their twin-sane lives with never-before-seen footage of their big day – and lives – with a new television special.  (TLC)

FOX NEWS: How has the “double” adjustment to newlywed life been these last few months?

“I would say that our first few months of marriage have been a whirlwind of fun and getting used to being married and the four of us living together, that dynamic,” Briana said. The foursome today reside in Virginia.

“With all four living together under one roof, there’s a lot of double dates,” Brittany laughed, detailing that the married couples, of course, have each gone on dates as individual couples too.

Have you faced any particular challenges in these early days of your respective marriages?

“We’ve been tired!” the sisters agreed with a laugh, detailing that life has been “go go go” — though they “like it that way.” After tying the knot in August, the couples went on a double honeymoon to Prince Edward Island – staying at “the same resort, different rooms” – and have been busy with their professional careers and filming their television special ever since.

What's the strangest question you get asked as twins being married?

“We get a lot of questions about our living situation, [we get] mostly positive responses to when people find out about it,” Jeremy said. “We don’t mind talking about it at all.”

“I would add that we totally know we are eccentric, socially eccentric,” Briana added. “I would say that the one that we get a lot [is that] people always ask if we switch partners — I hope we have explained ourselves that we do not!”

“We remain open to returning to television in some capacity,” the twin brides agreed, noting that they would be amenable to “the right opportunity” (TLC)

Have you instated any special traditions yet in your new household?

“Our one tradition that we’re so excited to start this year [on Valentine’s Day] is watching our televised proposal,” Briana said.

“We hope to start our family, we’re hoping to get pregnant around the same time. If we do, we’d like to go on a baby moon. We’ll play it by year, according to that” Brittany revealed. (TLC)

What are your collective plans for 2019?

“We hope to start our family, we’re hoping to get pregnant around the same time. If we do, we’d like to go on a babymoon. We’ll play it by year, according to that” Brittany revealed.

“If we do take a babymoon, we’ll return to the spot of the honeymoon, do a little reunion trip there,” Briana dished.

Would you ever consider returning to the small screen?

“We remain open to returning to television in some capacity,” the twin brides agreed, noting that they would be amenable to “the right opportunity.”

“We’re grateful to everyone who tuned in to watch [our special] — it meant a lot to us,” Brittany said.

“It’s been an amazing ride, though it seems very unlikely,” her husband Josh added.

“I just wanted to add that for me and Josh to be able to marry the twin women of our dreams – living our life together – we are so thankful,” Jeremy said.

“It’s been wonderful,” Brittany said, adding that some people have told the newlyweds that they “owe it to the world” to continue sharing their unbelievable love story – and journey – with the public.