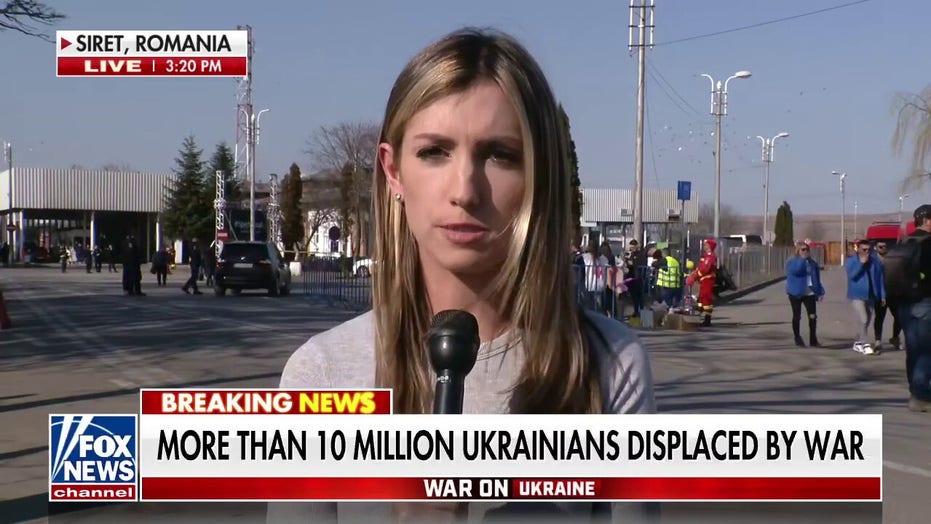 An exchange student from Ukraine who hopes to remain in the United States, where he's been since August 2021, is leaning on the support of his American teachers, his friends and the art of making music as he processes the fact that his loved ones are right now trying to escape the Russian-Ukraine war.

Matthew Frantsuzhan, 17, arrived in the U.S. late last summer for an opportunity to study music in West Des Moines, Iowa.

Now, after less than a year of studying music here, the teen is living with uncertainty and worry as his home — where his friends and immediate family were residing — was located near the original invasion zone.

"If I return to my hometown right now, it will not be the same city as I remember," Frantsuzhan told Fox News Digital.

"It's all about memories. I spent all my memories there. My friends and family may be killed at any time and I won’t have the opportunity to see them again. It’s completely terrible."

"[The] Ukrainian government — they made a law that all men from 18 to 60 years old, they’re not allowed to leave the country, and they will go and fight in the war," Frantsuzhan said.

He said that he turns 18 in October.

"I want to stay in America," he vowed. "America is my country. If I go back at all, they will send me to the war to die there, and I don’t want this to happen."

A choir member, saxophone player and piano player, Frantsuzhan studied music in Ukraine for eight years. He attended the Zaporizhzhia Children Music School in the southeastern city of Zaporizhzhia.

Now a Valley High School senior, Frantsuzhan told Fox News Digital that it wasn’t easy securing a spot in the exchange program — a journey that began in 2019 with the help of his mother.

Matthew Frantsuzhan, a choir member, saxophone player and piano player, is shown here with two of his music teachers. He studied music in Ukraine for eight years before arriving in the U.S. as an exchange student. (Matthew Frantsuzhan)

"There were 12,000 people who wanted to come to America, but there are actually only 37 students who are here," Frantsuzhan said, adding that he was ultimately chosen to be an alternate candidate.

The COVID pandemic halted the program — though it was reinstated in 2021. Now, he's unable to return home since learning that Russian forces invaded Ukraine.

Frantsuzhan said he was lying in bed when he found out Russian troops entered Ukraine.

"And when I received from social media all the photos and video and all the news ... I didn’t believe it," Frantsuzhan said of the attack. "It was a huge, huge shock."

Frantsuzhan, an only child, said his father Ivan was already in Dubai on business when Frantsuzhan's mother Olga reached Kyiv's Boryspil Airport — where there were attacks — in an attempt to flee Ukraine.

"If I return to my hometown right now, it will not be the same city as I remember."

"She was telling me, ‘I can be killed [at] any moment and I don’t know if I’ll survive. I want you to know, ‘I love you. I will do my best to survive so I see you again,’" he recalled his mother saying.

Frantsuzhan’s mother ultimately was able to leave Ukraine. She reached Poland, then the Czech Republic —and finally met up with her husband in Dubai.

Matthew Frantsuzhan's great-grandmother, Olga, 92, sits at her table at her home in Ukraine. Matthew is an exchange student in the U.S.; he's been studying music in Iowa since last August. (Matthew Frantsuzhan)

Frantsuzhan’s grandmother, Galina, 67, and his great-grandmother, 92, also named Olga (like his mother), planned to stay in Ukraine even after Russia invaded.

"They will protect our home until the end," Frantsuzhan said of his grandmothers. "They told us they will not move. They have spent their lives there."

Every day, Frantsuzhan misses Ukraine — especially his family and the fresh, homemade food grown in his grandmother's garden, he said.

Frantsuzhan has been able to communicate with his family via cell phone. He said his mother and father are safe, but both lost their jobs.

Frantsuzhan said goodbye to all his childhood friends, many who have already left Ukraine and are now scattered all over the world.

Haley Gibbons, a choir director at Valley High School and Frantsuzhan’s teacher, told Fox News Digital that Frantsuzhan is working with an immigration attorney in the hope that he might remain in the U.S. and eventually reunite with his family.

"I tell Matthew, 'You're here now. We'll be here for you, and we will do all that we can to maximize the time you have with us,'" Gibbons said.

"He's very articulate, he's very thoughtful and [he] has a really good command of not only his voice but his own thoughts," she added.

"If I go back at all, they will send me to the war to die there, and I don’t want this to happen."

Gibbons and her staff have been doing what they can to allow Frantsuzhan to be a teenager and to focus on his music, which brings him joy amid the terror of war.

"Matthew is not a panicker," Gibbons said. "He is a very, very strong young man, but if there's something that’s overwhelming him, [we] take deep breaths together."

A boy's future in America: ‘You can be safe here’

Frantsuzhan has dreams of becoming a music teacher and a show choir concert director. He hopes to attend Iowa’s Luther College, where his teacher, Gibbons, achieved her degree.

Frantsuzhan said he’s grateful for the support of his friends from Ukraine who are caught up in the war.

"I was shocked when all my friends told me I’m completely right, that I should stay in America," Frantsuzhan said.

"America is a different country, but I like America very much," he added. "It’s a completely new way of life …You can be safe here. You don’t have to worry about your financial situation, your safety [or] college."

"If you're born here, you have rights," Frantsuzhan said. "You have freedom. You can do whatever you want to do."

Frantsuzhan said he’s been looking to his teachers and friends at Valley High for support.

Frantsuzhan said he’s thankful to always have someone to hug or talk to; he's also grateful to have his music as a distraction until he’s able to see his parents — who are trying to build a new life.

Gibbons said she, her colleagues and Frantsuzhan’s immigration attorney are putting "all energy" into helping the teen stay in this country.