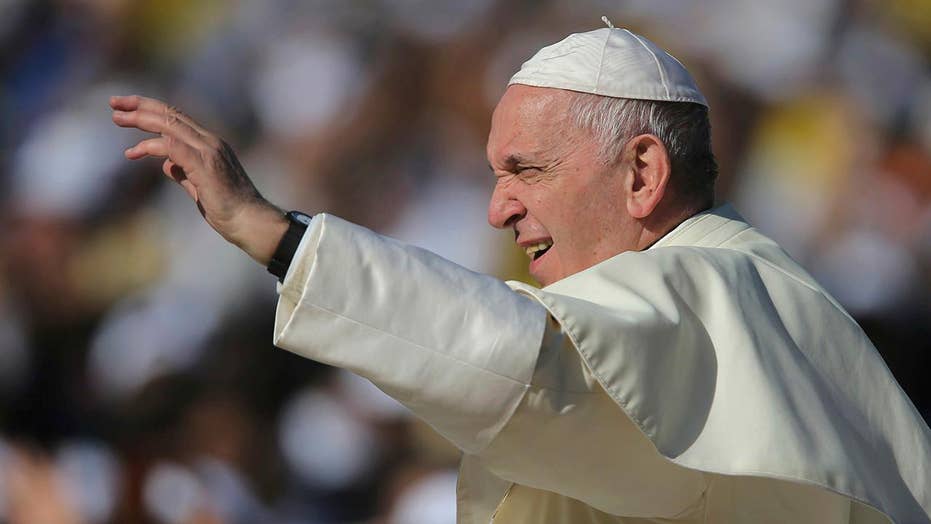 The pope becomes the first sitting pontiff in history to step on the Arabian Peninsula after delivering mass in Abu Dhabi; Lauren Green reports.

One vegan organization has asked Pope Francis to go vegan for Lent in exchange for a $1 million donation to the charitable organizations of his choosing.

Million Dollar Vegan announced the crusade on Feb. 6, challenging the leader of the Catholic Church to abstain from consuming animal products for the six week-period leading up to Easter, which falls this year on April 21.

The campaign, spearheaded by 12-year-old vegan activist Genesis Butler, urges the pontiff to use his powerful position to fight “climate change with diet change,” as detailed in the open letter she wrote to the 82-year-old holy father, which was published in 15 newspapers around the globe.

Pope Francis smiles as he arrives in the Paul VI hall on the occasion of his weekly general audience at the Vatican, Wednesday, Feb. 6, 2019. (AP Photo/Gregorio Borgia)

“In your encyclical letter, Laudato si’, you stated that every effort to protect and improve our world will involve changes in lifestyle, production, and consumption. I agree with all my heart and seek your support in tackling one of the largest underlying causes of the problems we face: animal agriculture,” Butler wrote.

Arguing that the major meat-consuming habits of the world’s wealthier nations are escalating “global destruction and devastation,” while 815 million people worldwide suffer from malnutrition, the youngster urged Pope Francis to adopt a vegan lifestyle (albeit temporarily) to positively inspire his worldwide following.

“Not only does animal farming impact on the world’s poorest, it contributes 14.5 percent of human-caused greenhouse gas emissions. It is also a leading cause of deforestation and the current mass extinction of wildlife,” Butler said. “Agricultural chemicals and animal waste are polluting our rivers, while overfishing and runoff are destroying our oceans.”

If Pope Francis accepts and successfully completes the challenge, the U.S. nonprofit Blue Horizon International Foundation will donate $1 million to the philanthropic organization, or organizations, of his choosing, as per the official announcement.

As noted by The New York Post, the Argentinian-born pope has long been a vocal advocate for fighting climate change. Over the summer at a Vatican conference, he opined that unsustainable development and rampant consumption threatens to turn the Earth into a vast pile of "rubble, deserts and refuse."

“It would be fantastic if the Pope did this,” one fan wrote online.

“I'm not Catholic, but I don't believe it is appropriate to ask a respected, high-level Christian leader to effectively head a paid marketing campaign, whatever the cause,” a critic clapped.

“I think Pope Francis should tell the vegans to keep their money and accept the challenge if they agree to say a rosary a day throughout Lent,” another cynic mused.