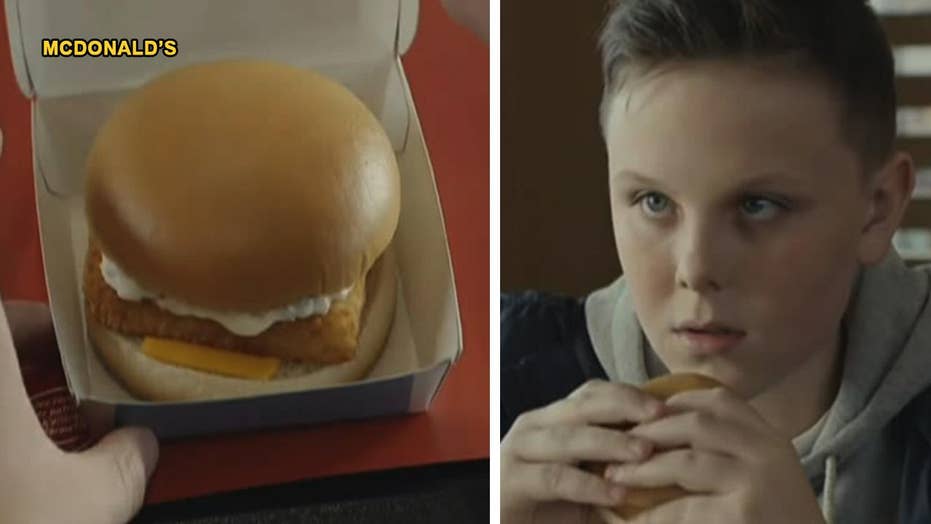 McDonald's and other ad campaigns that missed the mark

Backlash over the new McDonald's Filet-O-Fish ad campaign in the U.K., but they aren't the first company to miss the mark and end up offending consumers

McDonald’s in the UK is the latest food brand to face serious backlash on social media after airing an ad for one of the president's favorite meals: a Filet-O-Fish sandwich.

The commercial, which started airing across the pond last week, shows a young boy rifling through a box of his late father's belongings then cuts to scenes where he asks his mom to describe the man he'll never see again. The boy appears downtrodden when, after talking with his mom, it seems like he had little in common with his deceased pop-- that is until he's eating with his mom at a McDonald's and she mentions that he and his dad share(d) the same favorite McDonald's food item, a Filet-O-Fish.

The boy perks up and suddenly everything is made right.

Sound a little fishy? Pun intended. As soon as the ad aired, the social mediaverse  lashed out against the spot. Now branding experts suggest that, like the failed Pepsi-Kendall Jenner effort, the fast food chain not only missed the mark but may risk alienating customers as it struggles to attract millennial diners.

Dan Schawbel, a New York City-based branding expert and author of “Promote Yourself,” said he thinks the commercial was a poor choice on behalf of McDonald’s marketing team.

“The commercial was inappropriate because it used the death of a little boy's father as a way to sell a product. A lot of children have mourned the death of a loved one and the last thing they want to think about is a sandwich," Schawbel told Fox News, adding that the chain should stop running the ad to mitigate the negative social media backlash.

After the spot began airing, the advertising authority in the UK said  it received over 100 complaints about the commercial, reports Metro UK. On Tuesday, McDonald's confirmed that due to the overwhelming negative response, they decided to pull the spot from the UK media market, "including TV and cinema, completely and permanently this week."

The spokesperson elaborated to Fox News that it "was never our intention to cause any upset. We are particularly sorry that the advert may have disappointed those people who are most important to us – our customers. Due to the lead-times required by some broadcasters, the last advert will air tomorrow, Wednesday 17 May.

"We will also review our creative process to ensure this situation never occurs again.”

But in the age of the Internet, the ad continues to live on various social media platforms and has garnered significant backlash this week.

Many called the chain’s commercial, “shameless” “crass” and “inappropriate.”

“The McDonald's brand should be about creating fun, happy memories, and celebrating life's most joyous moments with your family and friends," Scott Pinsker, a branding and marketing expert, told Fox News.  "Focusing on death and bereavement is so far beyond the pale, it's almost inexplicable."

Pinksker echoed Schawbel's sentiments saying that the "family-friendly restaurant" clearly missed the mark in trying to promote its comfort food with such an over-the-top ad designed to evoke emotion.

"A child's greatest fear is losing a parent," explained Pinsker, "and exploiting this fear to sell a fried fish sandwich is loathsome."

But will the commercial actually harm McDonald's in the long run? Given the chain's swift and decisive action, it's not likely.

"While this may have cost them money, it's far better to reinvest in a better as than maintain a poor one," says Schawbel. "Either way, I don't believe they will actually lose revenue due to the debacle and Chick-fil-A and others have actually generated more money with bad press.

"Brands are forgiven when they apologize, though."