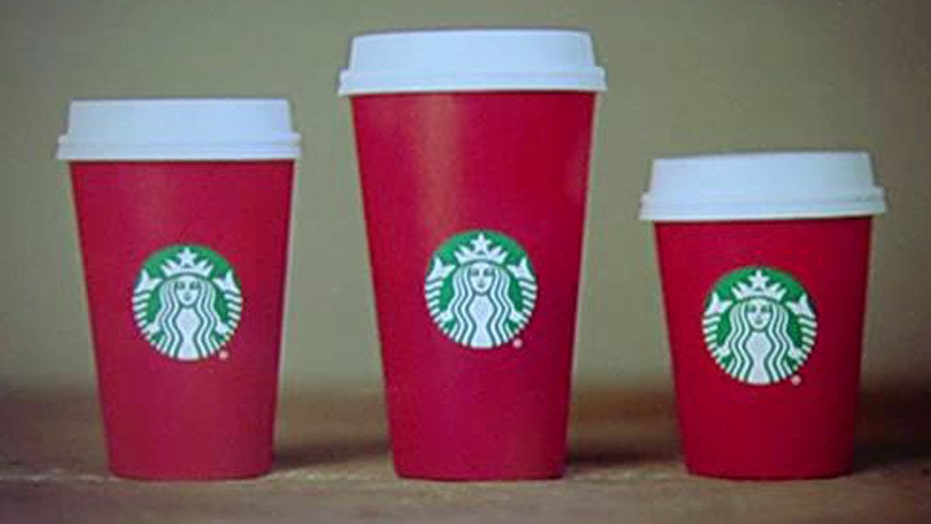 Starbucks a scrooge this year?

Starbucks' new red holiday cups caught some serious buzz this weekend after an Arizona evangelist said that the company "removed Christmas" from its cups "because they hate Jesus.”

“I think in the age of political correctness we become so open-minded our brains have literally fallen out of our head,”  Feuerstein said in a anti-Starbucks rant on Facebook titled “Starbucks REMOVED CHRISTMAS from their cups because they hate Jesus.”   As of Monday morning, the video has been viewed over 12 million times.

“Do you realize that Starbucks wanted to take Christ and Christmas off of their brand new cups? That’s why they’re just plain red.”

Starbucks told FoxNews.com last week that the cups' new red design is embracing the simplicity of the season and offering customers a blank canvas to tell their own holiday story.

In the video Feuerstein says he tricked Starbucks into putting "Merry Christmas" on his cup by telling his unsuspecting barista his name was Merry Christmas. Feuerstein added that he wore a Jesus Christ T-shirt into the store "just to offend" -- and also brought his gun with him, since Starbucks "hates" the Second Amendment.

"Choose to not be political correct, just correct," Feuerstein said.

He also challenged “great Americans and Christians” to do the same by making “coffee selfies” with the hastag #MerryChristmasStarbucks.

Over the weekend, some supported Feuerstein message, but others were not so sure if it was an assault on Christmas.

This isn’t the first time that Feuerstein has tried to stir controversy with hot button issues. He first gained national attention last year when he posted a Facebook video of himself calling a Florida bakery demanding a cake with the words, "We do not support gay marriage." It being April 1, the owner thought it was a joke, hung up, and subsequently got hundreds of calls and death threats from some of his more than one million followers.

In July, Feuerstein posted another video on Facebook that suggested Christians should fight against gay rights with firearms.

Last week speaking about the cups' new design, Paul Batura, vice president of communications at Focus on the Family, said snowflakes and carolers are not symbols of Christmas.

"I wonder if we’re not overthinking or overanalyzing this,” he said. “Christmas isn’t found in a cup or in a snowflake. Instead, it’s found in the hearts and minds of those of us who believe that God sent His only son to earth in the form of an innocent, helpless baby."